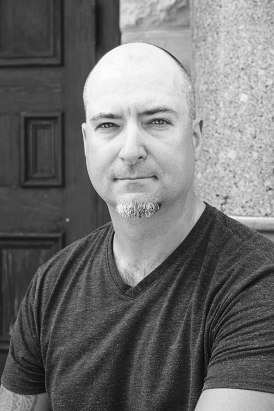 We caught up with Troy Boleyn from Architecture of Sound to talk about his life and loves in music.

Well, my name is Troy Douglas Boleyn. My dad had an awesome and dark sense of humor, but also a strong loyalty to our roots. My name is an homage to both his parents, with a little touch of destiny. Troy is old French (tribute to my grandfather’s lineage) for ‘Soldier’ or ‘Warrior’. Douglas is Scots Gaelic (tribute to my grandmother, born near Ayr) meaning ‘of darkness or dark waters’. Soldier of Darkness, essentially.

My surname is already pretty well-known, thanks to Anne Boleyn. But the records of our lineage go back to the 1100’s AD, to Boulogne-sur-Mer in north France, where the name originated. Initially the surname was DeBoleyne. I’ve been considering honouring my ancestors by taking that version as my entertainment name. My mom’s side is Lakota (my grandfather was full Oglala Sioux) and Scandinavian (grandmother was Swede). The ‘destiny’ bit of my name comes from my service in three of four branches of the US military, in a medical capacity.

Music runs deep in the bloodline. My grandfather had a bluegrass country band called Tommie Boleyn and His Cowboys in the early half of the 20th Century. He, like myself, was a multi-instrumentalist. He preferred drums, where I prefer strings – especially guitar. I vaguely remember having a Fisher-Price baby toy with a multitude of bells and whistles, and trying to mimic “Jump” by Van Halen on it after seeing the music video on MTV early in the 80’s. I’m 42 now, and still can’t play that song right.

My parents divorced while I was very young. While time with my dad during that age was limited, I think he had the most musical influence on me, as far as being a listener. My first cassette tape at age 6 was from him, and it was Black Sabbath (self titled). I was hooked on Ozzy from that point. However, living with my mom and step-dad, who were both heavily into old country (Hank Sr, Johnny Cash, Chet Atkins), I acquired a taste for different genres.

Around age 9, I was given an acoustic guitar. I remember having recorded onto a cassette tape, I think it was on my brother’s White Snake tape (where I’d filled the security gaps on the top corners with paper), a bunch of rock songs off of the eastern Iowa radio station Rock108. ‘Crazy Train’ was one of those songs, and was the first song I learned by ear. Not the solo, but the main rhythm parts. I think it took me about three months to get it sounding right.

From age 11 onward I was living with my dad, and his wife got me into KISS and Queen, and gave me a bunch of her old records from them. She was also big into Garth Brooks, who also has some influence on me. In middle and high school in the 90’s, Faith No More, Poe and No Doubt were at the top of my list. Believe it or not, I have to attribute much of my success in music today to the Spice Girls! While in high school and after, I was caught up in a phase where I wanted to be a session or touring musician for that group. I even had a penpal from Berkshire, Reading, who would feed my addiction. I still love them.

My high school pal and fellow actor, Michael Mosley, got me into Type O Negative in 1997 with their album ‘Bloody Kisses’. In 1998, I was invited to Poland as an actor with a drama troupe from Iowa, and was introduced to bands like Rammstein and Drain STH, as well as Polish artists who still influence me – Republika, Kazik, Kayah and Justyna Steczkowska. In 2000, I was living in a one bedroom apartment in Brooklyn with five Polish pals, and through new friends, was introduced to Peter Steele of Type O Negative in a local shop. Since meeting him, I’ve been a diehard TON fan. Rasputina also became an influence during that time.

Because of the gamut of influence, I’ve been trying to experiment with music in various genres. Sometimes I blend and bend genres, but other times I record with the intent of having various albums in specific genres. Depth is something I strive for musically. That kinda ties it all together.

In the mid-2000’s, while working in film and TV in Poland, I saved up some money to start building a home recording studio in the flat I lived in. I recorded quite a bit of stuff with a DJ that I met while teaching English in a private school in Ursus, Warsaw. Some of that will be redone for a future release. From 2008 to 2018, I pretty much had a musical hiatus, pursuing a medical career.

I had moved to Texas in 2014 in hopes for pursuing both, but things fell flat musically for awhile. After a tumultuous four years in DFW (Dallas/Fort Worth), I decided to channel my energy in a more productive way, and got back into music. I had one goal: get my music onto Pandora. So I started researching how to do that without a label, and discovered Indie distributors like TuneCore, DistroKid and Spinnup. I was pretty late to the game, I could have been releasing music since my Warsaw sessions, but things seem to eventually fall into place. Since then, I have released and distributed four albums, each bearing my branding of a rose-like ornate ‘B’ for my surname.

Each album is simply titled by volume: I,II,III,IV etc. The first three were purely instrumental with the first being an EDM album (mostly influenced by the Fast n Furious movies), second was an Americana/Folk-Electronica collection, third was a tribute soundtrack to the TV show ‘Vikings’ (shows and movies have more influence on me as a musician nowadays than other musicians, I think), and the fourth was a Pop-Rock/ Ska release. Most recently, I’ve teamed up with an Italian rock singer and some Polish musicians to create Architecture of Sound (AoS), a symphonic rock and metal project.

I still listen pretty actively to the bands mentioned earlier, even the Spice Girls, but have been using Pandora to get more of a variety. Guano Apes and The Birthday Massacre are two bands that I’ve been increasingly into lately, and feel very much inspired by them.

Collabs have become an increasingly awesome experience for me, working with musicians like Poland’s awesome violinist, Ilona Perz-Golka and Italy’s Ele Dona of Hi Fi Stacy on AoS. Working with my Polish brothers on professional musical projects has long been a dream. Now that it’s become reality, I can set my sites on working on BIG dream collabs. If I had to choose just one as a dream collab, I’d say either my grandfather’s country band or co-composing works with Anne Boleyn.

A country tribute album to my grandfather and old time country music, a Yoruba pop album in tribute to my Nigerian wife and her culture, a Polish Pop and Rock tribute album covering my favorite bands and songs from Poland and more Architecture of Sound collaborations are my focus on the immediate future.

You can find me on Reverbnation at www.reverbnation.com/architectureofsound.