Billericay Town continued their impressive vein of form in pre-season with a convincing home win over Ipswich U-23’s. A hat-trick from Jake Robinson and further strikes from Ayoub Assal and Lewis Knight without reply sealed the win against a young academy side.

It could have all been so different if the visitors had managed to capitalise on their early dominance. The Blues had every right to fear the worst after a number of sloppy passes in the opening five minutes conceded possession in central areas. Breaking rapidly, Ipswich’s speedy striker, Zak Brown, forced Dion-Curtis Henry into a sharp early save with his legs.

A better chance soon arrived as Brett McGavin hit an angled pass through the midst of the Billericay defence to Brown. Racing clear down the right flank, he squared for striker, Tyreece Simpson, who spurned the golden opportunity by firing wide of a gaping goal.

It continued this way for the first half hour with Ipswich regularly showing the technical proficiency associated with academy players cultivated at League clubs. Quick to seize on misplaced home passes, and profiting from ample space to construct their attacks, a succession of chances followed as substitute, Matt Healey, drew another save from Henry.

As the half progressed, Billericay started to make more of an impression, led by the creative influence of Jai Reason. He would create the opening goal as he picked up possession on the left side of the penalty area. Firing hard and low across the Ipswich stopper, Bert White, his drive was pushed out to the waiting Robinson. Evading Elkhan Baggott, he slotted home.

The East Anglian side sought to counter quickly exploiting either flank. On the left, the combination between full-back Tommy Smith and wide striker, Ben Folami, troubled the Billericay defence at regular intervals. On the right, Brown’s sharp turn of pace was a constant menace ensuring that Blues left back, Harry Hudson, was fully occupied.

Once more though, Billericay struck, showing the youngsters that a clinical touch can make all the difference. On the stroke of half-time, two experienced heads combined as Doug Loft displayed great vision to chip a ball over the defence to Robinson. Staying onside, the home front man scampered through to dispatch a low drive into the net.

Jake Robinson at the double to finish off Doug Loft’s chipped pass with another goal. Photo Courtesy: @nickyhayesphoto

Ipswich carved out two more chances immediately after the break. First, Smith’s centre rolled the width of the six-yard box inches from the goal-line but evaded the onrushing Folami. Seconds later, Wilson, at the far post, had to clear a Simpson drive off the line.

Entered at half-time, Billericay’s Hani Berchiche and Ayoub Assal were immediately influential in their respective positions on the left side of midfield and just behind the striker. Assal, collecting an instant lay-off from his fellow substitute, soon made his mark on the game. Driving home from 20 yards, his shot flew past White to send the Blues three up. 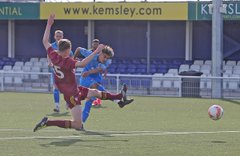 On the hour, both substitutes combined to good effect once more. Berchiche initiated the move, finding Assal, who swiftly played a one-two with Robinson. Driving into the penalty area to collect the return, the striker was felled by Ipswich defender, Cotter, for a clear penalty. Robinson picked himself up to lash home the spot-kick to complete the hat-trick. 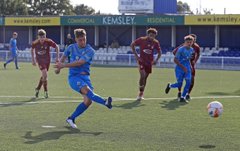 Jake Robinson fires him a penalty to complete his hat-trick against an Ipswich X1. Photo Courtesy: @nickyhayesphoto

O’Hara made further changes, including the entry of Yiannis Drais, for a short, impressive cameo in central midfield and handing a senior debut to promising U-18, Jamie Drake. After his brace against Barking, Jake Nickless returned from injury and soon picked up the pace of the game to contribute a superb through ball that saw Assal side-foot inches wide.

Billericay U18 Jamie Drake steps up to the first team squad for a senior debut vs Ipswich. Photo Courtesy @nickyhayesphoto

There was still time for a final strike with only five minutes remaining. Nickless’s delivery from the corner was faultless as the towering figure of Billericay’s Lewis Knight climbed above the Ipswich defence to head home from close range to seal a convincing win.

A pleasing result but not one from which lessons cannot be learned. Manager O’Hara will reflect on a poor first thirty minutes that could have been the undoing of Billericay as Ipswich spurned a host of chances. Resilient enough to weather the storm, and make the necessary tactical changes at the break, an improved second half display offers encouragement that the team is making clear progress.

Forging an excellent reputation in the Billericay goal. An early save from Brown was his best but did well to block further strikes from Healey and Folami. Looks solid.

Caught out initially by the pace of Folami in behind and a sloppy ball in possession conceded an early chance. Grew into the game, passing well & contributing offensively. Cleared a shot off-line.

Had the toughest task defensively as exposed by Brown’s pace. He struggled to cope with the lively winger who created numerous chances. Looked more comfortable after the break.

Secure defensively and a strong aerial presence. Covered well on the left flank to double up on Brown. A safe partnership with Henry and distributed the ball satisfactorily.

Always sure in the tackle, and watchful of centre-back Simpson, he organised well at the back. Played the ball out astutely. On occasion, ventured forward and crossed accurately.

Lacked a little of the sparkle from previous matches but a hard-working, committed performance. A couple of good crosses from the right side and a shot just over.

Part of a midfield that stood off Ipswich in the early stages, he improved as the game progressed. A later start to pre-season than many others, still finding his feet.

Made the best of the service on offer and converted all that came his way. Superior movement to get clear of the defence. A committed performance, he deserved his triple.

A skilful touch and at the heart of the Blues invention in the first half. Creative but has the necessary blend of “nasty” to impose himself. His initial shot across keeper led to first goal.

Stood off Ipswich early on but adapted to pace and closed off spaces. Made a number of blocks and tackles. Good vision to find Robinson with a chipped pass to assist for the second goal.

Lively presence in an attacking role. Made a series of darting runs through the Ipswich defence. Fine finish from outside the box for his goal and linked well with Berchiche. Side-footed wide when through.

A threat from the left side, excellent close control and held the ball up under pressure. Impressive decision-making and a series of clever lay off’s in the box included an assist.