Chelmsford proved themselves to be good travellers as they put an end to St Albans’s impressive status as the only unbeaten elite side left in England. Two first half strikes from Charlie Sheringham and Adam Morgan decided the encounter against a subdued home side. 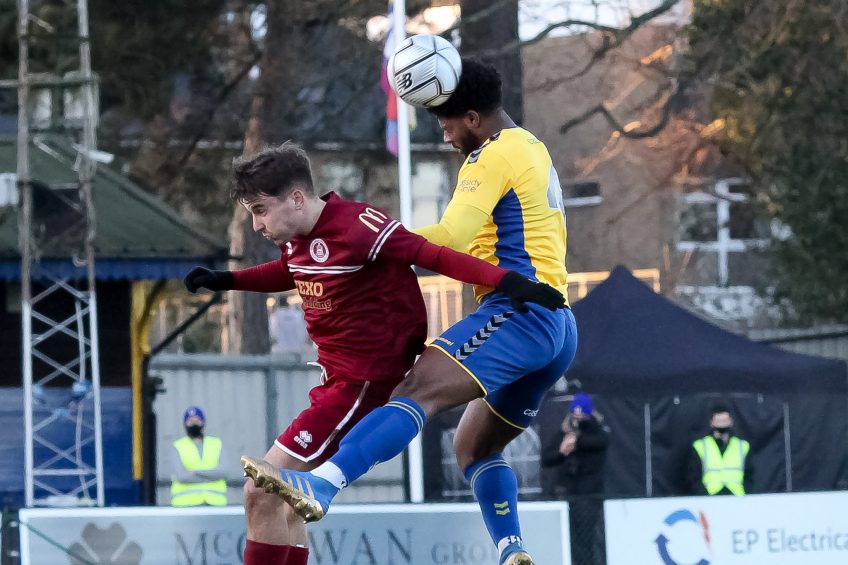 Courtesy: @stalbanscityfc
With COVID-19 wreaking havoc with the football schedule, this fixture at Clarence Park proved to be one of five out of ten National South fixtures that survived the weekend. Both Chelmsford and St Albans have had to observe recent periods of self-isolation themselves, with the home side playing their first match of the year after cases of the virus in the camp.

The Saints provided what looked demanding opposition on paper with a win record of 100% in the five matches played at home, unbeaten league status in 20/21 elite football, and a paltry five goals conceded. Throw in a nine-goal striker in Shaun Jeffers, only too familiar to the Clarets supporters, and recall only one win away at bottom side, Welling Utd, and the smart money would be on a home win.

It is football’s welcome tendency to confound the form book that makes it such a thrilling game. The Saints would have missed their three absentee starters. In a match that cried out for the creative influence of Zane Banton, five assists and an eye for goal, he was sadly side-lined. Lack of midfield engine, Solomon Nwaboukei, and the solidity at the back provided by the influential Tom Bender may have shortened the odds of an upset.

That is not to say that Chelmsford entered this fixture at full strength nor with the greatest of confidence. A run of five home defeats only ended last week in a second half come-back against Braintree. Missing from their ranks was Cameron James, who has acquitted himself well at left-back this season. The brawn of Anthony Church, a reassuring presence in central midfield, was also out, completing a suspension after a sending off versus Bath City.

On a sunny but chilly afternoon in Hertfordshire, the Saints began brightly with an initial incursion down their right side. New signing, Ricky Shakes, 35, who linked well with right-back, Devante Stanley had originally announced his retirement from football last April. Known to manager, Ian Allinson, who had him at Boreham Wood, he justified his decision for a re-think with a promising display of enterprise while others toiled for a breakthrough.

Finding space, Shakes put the first cross of the match into the Chelmsford box where right wing-back, Danny Imray, was on hand to head clear for the visitors. A club academy product, identified as a talent and fast-tracked into the first team, Imray, 17, is at the other end of the career spectrum. He surely has a very bright future ahead. A one man assist machine against Braintree, his regular forays forward were a regular threat to the Saints. 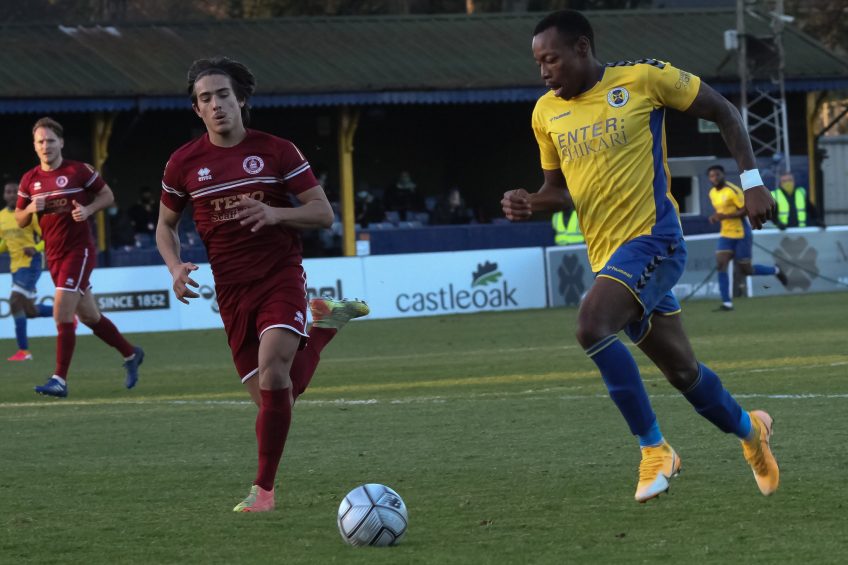 During an opening half-hour, defences remained in the ascendancy with possession passing back and forth. Any attacks from either side that made it into the final third swiftly foundered on alert centre-backs. Chelmsford, impressively solid in their 3-5-2 line-up, formed a convincing barrier with any headway from the home side made down the right.

St. Albans, aligned in a traditional back four, had James Kaloczi quick to intervene if the penalty area was threatened. A rapid counter allowed a brief sight of goal to Dylan Asonganyi. In addition, the conscientious Munashe Sundire lent a regular hand, tracking back to offer assistance to left wing-back Jake Warner-Eley to stifle the danger of Imray.

A notable contrast between the two teams came from Chelmsford’s rapid and incisive counters featuring intelligent switches of play. This compared favourably to the Saints build-up, which did verge on ponderous at times. Regular shuttling of the ball across the backline, and to and from defence to midfield, only served to inflate the possession statistics.

One such counter would allow Chelmsford to secure the opening goal on thirty-two minutes. A Saints attack was repelled and Chez Isaac took the initiative. His searching diagonal ball out to the lively Morgan on the left flank proved to be the key pass. Opening up the defence, Morgan was in the perfect position to find Imray on the opposite side.

The young full-back stood up an inviting cross to the far post where Sheringham controlled and swept home to score for his fourth consecutive game. Proving to be the perfect “big man” up front to lend efficacy to the wing-back formation, the expiry of his loan agreement with Dartford must surely be renewed. After such a compelling demonstration of form, it cannot be excluded that Steve King could give him another opportunity at Princes Park.

Chez Isaac is a player that sometimes passes under the radar as he diligently goes about his business. Whilst Callum Harrison has caught the eye this season, with his positive movement and knack for a through pass, it was Isaac’s day against the Saints. He was at the heart of the move for second goal as his excellent ball for Asonganyi split the home defence.

Saints goalkeeper, Michael Johnson, saw the threat early and raced from his line to thwart Asonganyi with a headed clearance. To his horror, the ball found Chelmsford’s most technically gifted player, Morgan, 30 yards out with an empty goal to aim at. He effortlessly, lifted the ball over the stranded Johnson and into the net to double the lead on 42 minutes.

Perhaps encouraged by the over-turning of a 2-0 half-time deficit earlier in the season at home to win a five-goal thriller against Ebbsfleet United, the Saints pushed forward. A shift to what looked a back three after the break to give greater licence to the wing back’s to attack looked to have paid dividends as Stanley tumbled to earn a penalty from the linesman.

With Wraight protesting his innocence, and a suspicious referee, play was halted as Jack Packman ushered away all the players to consult with the linesman. A thirty second conversation ensued that ended by the decision to award the penalty being reversed. The offence had looked a soft award. Protestations at the change of mind from the Saints were tellingly muted. A yellow card was instead issued to Stanley for assumed simulation.

Just past the hour mark, the sun began to set in Hertfordshire and served as a pertinent metaphor for the home sides chances of getting back into the game. Even when Warner-Eley did make progress on the left flank and get the better of Imray, Ade Oluwo was on hand to twice block the cross and calmly pass the ball forward into the midfield. 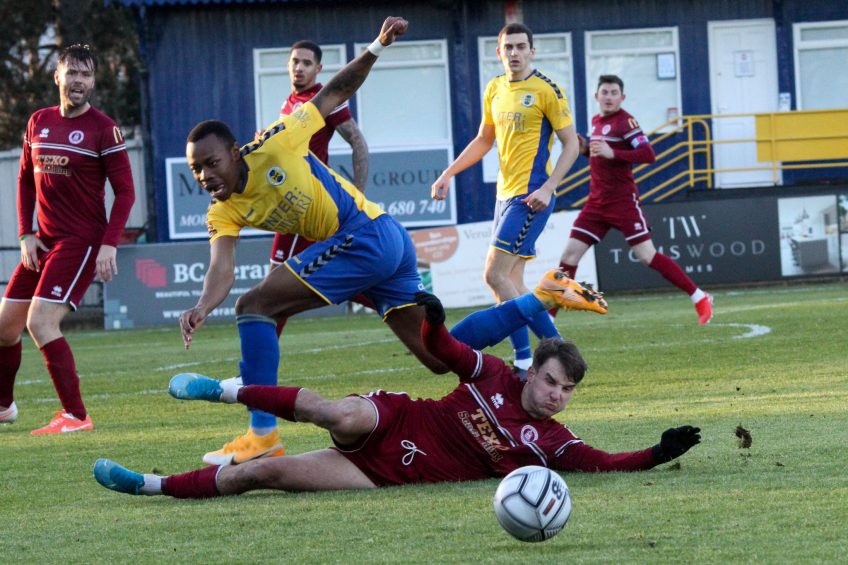 Outstanding with his blocks, and tackles, Oluwo, once a Bromley U-18, came from step five club Fisher FC in the South East Counties league. Returning to the game at this lower level, after time out of football to earn a university degree, he impressed in pre-season trials at the Essex club and was awarded a contract. The centre-back looks at home in step two.

As the match progressed, a third for the visitors seemed more likely than a home fight-back. Imray’s pass down the line found Sheringham as he pulled wide. Whipping in a cross worthy of a winger, the striker’s ball only needed a touch but it just evaded Asonganyi in the centre. Moments later, on sixty-eight minutes, Isaac strode assuredly forward, finding a deeper lying Sheringham. His instant ball travelled wide to Morgan who centred for Isaac to run clear on goal. Johnson rushed out to save with his legs as a golden chance was missed.

As Sheringham nodded wide with a free header at the near post from Morgan’s corner, Allinson had seen enough and brought on David Noble. Now 38, the midfielder has enjoyed a glittering league career at the likes of Bristol City, Exeter, and Rotherham United. He brought a touch of quality and passing range to the team that had hitherto been lacking.

The closest the Saints came to a consolation was from a Diedhiou break down the right as he sent over a tempting cross to the far post. Warner-Eley connected with a goal-bound header that was blocked initially by Oluwo. The rebound fell back to him but was sent well wide.

A double substitution by the Saints saw the entry of new signing winger, Jordan Kinoshi, and Romeo Akinola, make no difference to the score-line. With Jeffers crowded out by an alert Clarets defence in the penalty area, it was not to be for the home side and the unbeaten record slipped away.