After another defeat at home against fellow strugglers, Hemel Hempstead, Billericay find themselves rooted to the bottom of the National South Table. Branded a “must not lose” fixture, in what was an early season six pointer, the two worst sides in the division battled for a title of sorts. It proved to be the home side that let all three points slip to take the unwanted accolade.

Sleepy starters, Freddie Hinds gave Hemel an early lead before Rowan Liburd replied. A two-goal salvo after the break, within the space of four minutes, turned the game for the visitors. Both strikes from set pieces with James Kaloczi and Jonathan Lacey applying the headed finishes. Michael Chambers’ scrambled goal proved little more than faint consolation for this defeat. 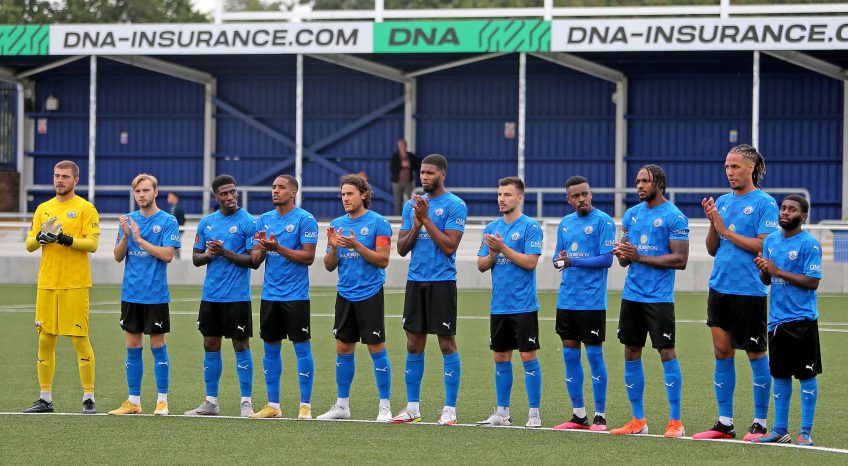 Winless in the league, a gutsy FA Cup win at Braintree Town the previous weekend had provided hope that a corner could be turned. Hemel, also with a single point to their name, and nursing a recent loss in the Cup to step four opposition, Ware FC, seemed perfect opposition to tempt a turnaround. Having brought in new management in the week, former Oxford City boss, Mark Jones, had arrived in Hertfordshire to take charge of his first league game.

Billericay had also been active during the week but on the player front. Kevin Watson elected to strengthen his squad with the additions of left winger, Bagasan Graham, from Dartford and striker, Kweku-Conrad Lucan from Leatherhead. Graham, 28, has lacked game time but boasts a track record at step two with spells at Chelmsford City and Ebbsfleet United. A starter against Hemel, he turned in an encouraging, man of the match performance. 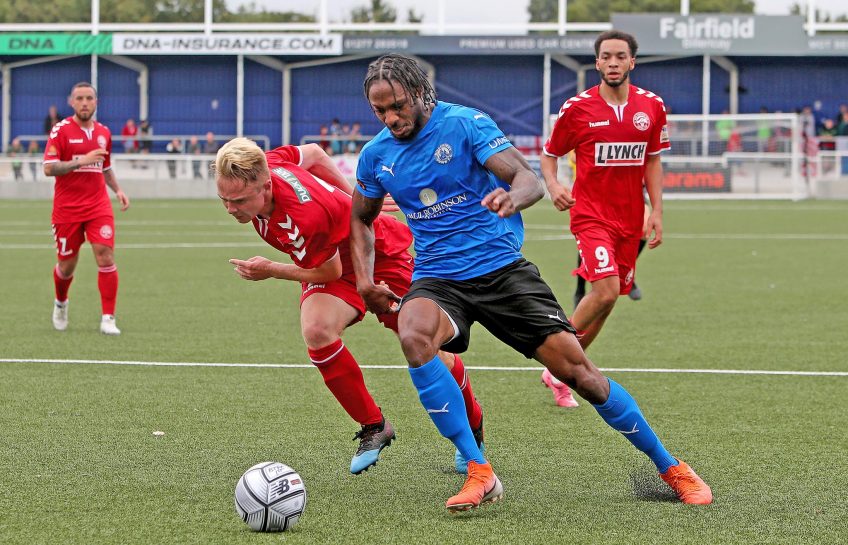 Lucan was a late substitute but added an attacking threat and was unlucky not to score on debut. A former youth player with Peterborough United, he has operated mainly in step three at the likes of Wingate & Finchley and Biggleswade Town. With Billericay’s lower league finds Toyosi Olusanya and Reuben Soares Junior moving on to professional clubs, it can be a gamble that pays off. Arguably, performance levels of higher tier players joining the Essex side have been a greater source of frustration.

The clash with Hemel had been discussed for weeks among the Billericay fans. The importance of the match was clear to all involved at New Lodge at every level. If any game could be described as a vital, “must not lose”, fixture, it was this one. A battle for the mediocre, the right to be not quite as bad as the other side? Whatever your take, the minimum demand was to start well and show commitment, passion, and engagement.

If managerial instructions had been to start on the front foot, take the game to Hemel, and show the visitors that they were in for a tough afternoon, they were not followed. The green shoots provided by Liburd’s early break and hurried shot over the bar soon withered and died as a Hertfordshire frost soon descended. 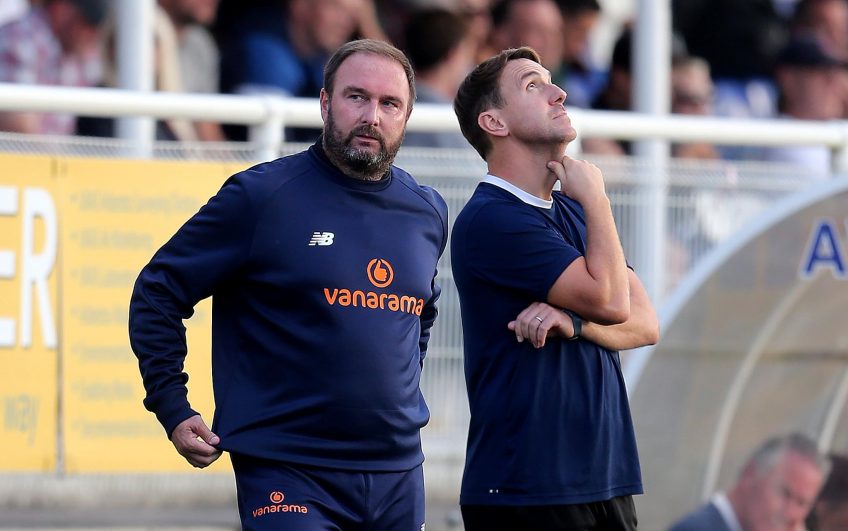 Calm, controlled, and taking charge of midfield through the league experience of their central pairing, Samir Carruthers and Sam Mantom, Hemel exerted early domination. Carruthers, a veteran of 128 MK Dons appearances, was eager to carry the ball forward and slide in quick, incisive passes for the busy, mobile, front two, Hinds and Lacey.

Mantom, formerly of Walsall, Scunthorpe and lately Southend United, picked up possession slightly deeper and regularly fed the marauding left back, Aaron Simpson. Testing Marvel Ekpiteta in particular, who stacked up the headed clearances, he also attempted to send balls in behind the Billericay defence.

Simpson, who seemed to show no ill effects from missing a section of pre-season to appear on Love Island, was particularly prominent. With regular right back, Gus Scott-Morris, one of Hemel’s top performers, unavailable and replaced by Liam Bennett, the Hertfordshire side’s attacks seemed to be clearly focused on utilising the left-hand side.

Ironically, the opener on three minutes for Hemel came from a rare foray down the right. It did start with Simpson who nudged the ball inside to Carruthers. He served Chris Paul whose run forward and cross into the penalty box sewed panic in the Billericay defence. Lacey collected and helped on to Hinds. The ex-Bristol City U-23 striker provided the finish from six yards.

With Hemel roared on by a noisy away support, encouraged by Billericay’s submissiveness, it was only home goalkeeper, Bailey Vose, that prevented further damage. Carruthers gained possession and slid an incisive pass inside the static defence to the onrushing Simpson. His fierce shot slammed into Vose’s face as he spread himself quickly to save.

Billericay seemed to stir after twenty minutes as Pinto fired over from a tight angle after being put through by Darren Foxley. After good work from Graham, Joe Felix crossed from the right to the waiting Foxley. Finding himself unmarked, he spurned the opportunity with a stooping header wide of the mark. It would not be the only great chance missed by the Blues.

Graham, absent from competitive matches for months, and making his first appearance for the Blues, was Billericay’s best player by far. Whether we should reflect on the positive element of a handy acquisition or the paucity of the rest of the squad depends on how full you tend to view the glass. For now, it is probably best to take heart that even at this late stage of the recruitment cycle, there appear to be players available that can make the squad better.

The new arrival was the key creator for the Billericay equaliser on 37 minutes. Racing to reach a Pinto pass that looked to be overhit, he somehow made up the ground. Crossing from the left touchline, Liburd raced through to volley home past a stunned Nicholas Hayes. 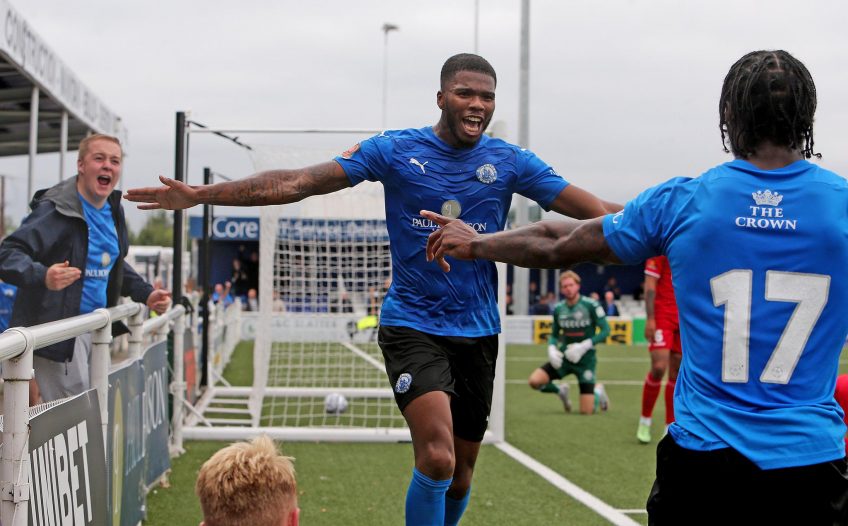 Blues almost took the lead within minutes but for the alert Hayes. Diving full length, he managed to divert a well-struck drive from Pinto over the bar to safety just before the break.

At the interval, this was a finely balanced contest, which both managers must have felt was there to be won. For any team ascending the learning curve, mistakes are an understandable part of development. Not learning from errors made is, however, more serious. And, unfortunately, it proved to be the undoing of Billericay as they entered the second half as sluggishly as they had commenced the match.

Hemel could not believe that good fortune was once again offered in abundance by their generous hosts. They took full advantage, maintaining the pressure to earn a series of corners and score a 51st minute goal. Carruthers swung over the set piece and Kaloczi, unattended at the far post, had the simple task of heading home to restore Hemel’s lead.

To concede from a set play at a vital juncture is frustrating enough. To fall victim to the same play four minutes later is unforgivable. Once more, Carruthers provided the ammunition. On this occasion, at least Lacey did bother to show some trickery as he ghosted away from an inattentive marker to find space. His header at the front post was powerful and very well directed. It sped back past Vose into the opposite corner of the Billericay net.

To their credit, Billericay did not give up and character was shown as the Essex side sought to retrieve what looked to be a losing position. Ekpiteta wasted a golden chance, sending a looping header over the bar after finding space to meet a George Wind cross. Jai Reason, on as a substitute, brought increased invention and had a shot charged down by Simpson.

Chambers handed Blues a lifeline on 75 minutes. Quickest to react to a Liburd headed knock-down, he scrambled the ball over the line before Hemel could clear. 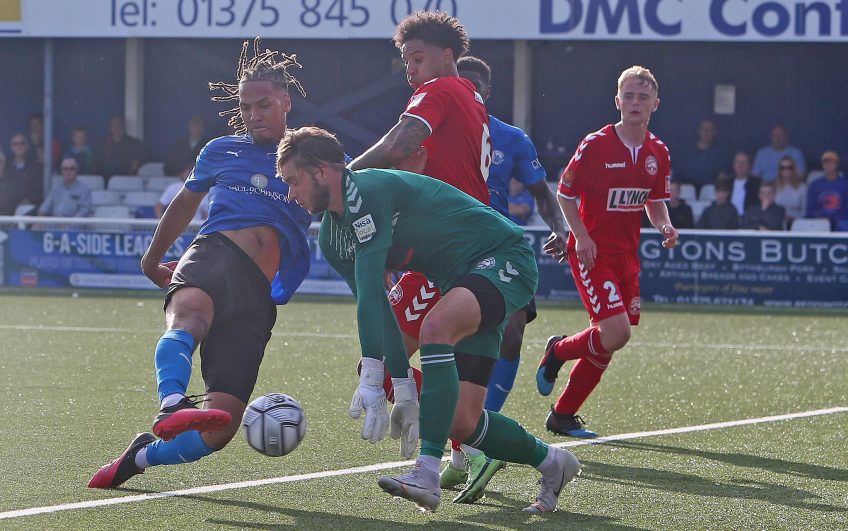 Bizarrely, Billericay immediately handed the initiative back to the visitors. Failing to track opposition midfielders, Alfie Cerulli took the opportunity to break free. His shot was well struck but cannoned back off the inside of the post and away to safety.

Within seconds, it happened again as Lacey benefited from the freedom of the Billericay penalty area. His rising drive smashed against the underside of the crossbar. Bouncing down, it was adjudged not to have been a goal. Highlights may prove that Lacey was unlucky not to end the afternoon with a second strike to his name.

Billericay did not lack chances to snatch a point in the final stages. Kurtis Cumberbatch drew a fine save from Hayes with a curling effort directed towards the top corner. Lucan entered the fray in the closing minutes. He soon showed his pace to get beyond the Hemel defence. Arriving to meet a through ball, he sent his lob over the onrushing goalkeeper and the bar. 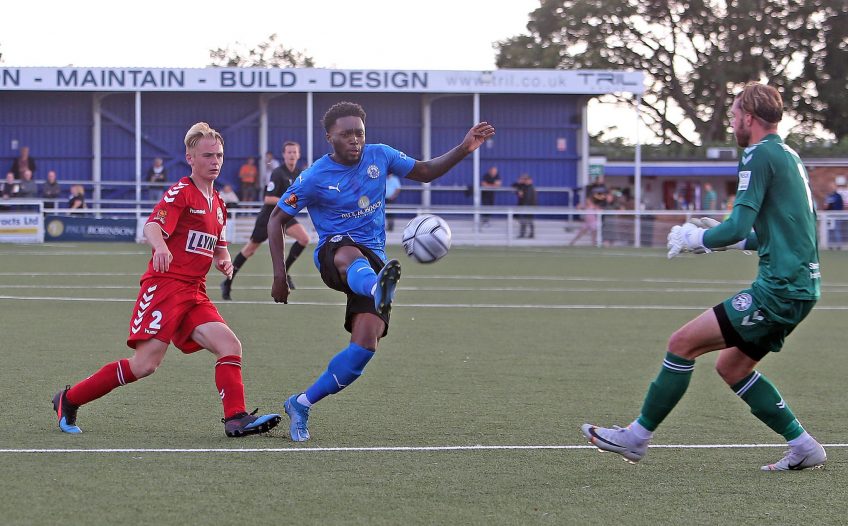 Having wasted a hatful of opportunities, the Blues blew yet another in added time. It came from a piece of invention from Reason as he twisted and turned to find an opening. His inviting cross demanded a headed finish from Liburd. Misjudging the flight, the connection was weak and the ball sailed wide of the mark. There would be no late reprieve. Lady luck can only do so much.