A revitalised Billericay Town under new manager, Kevin Watson, delivered their best performance of the season to secure the points in a vital home win against Dulwich Hamlet.

A towering first half header from Michael Chambers, and a close-range finish from Jake Robinson in injury time, marked a transformation for the side well beaten at Dartford on the previous Tuesday.

Having witnessed a performance four days earlier in Kent that warranted immediate attention to the squad, Watson had acted swiftly.

New arrivals, Rowan Liburd and Darren Foxley, signed days later. Covering the key positions of centre-forward and left wing-back, both were drafted in to start in place of the suspended Luke Wanadio and Billy Knott.

Lending much-needed support to Robinson, ex-Welling centre-forward, Rowan Liburd, is well-known to more seasoned fans. A former Billericay player, the 6ft 4ins striker amassed 22 goals in 30 appearances at the club in the 2014/15 season before earning a deal at Championship side, Reading. 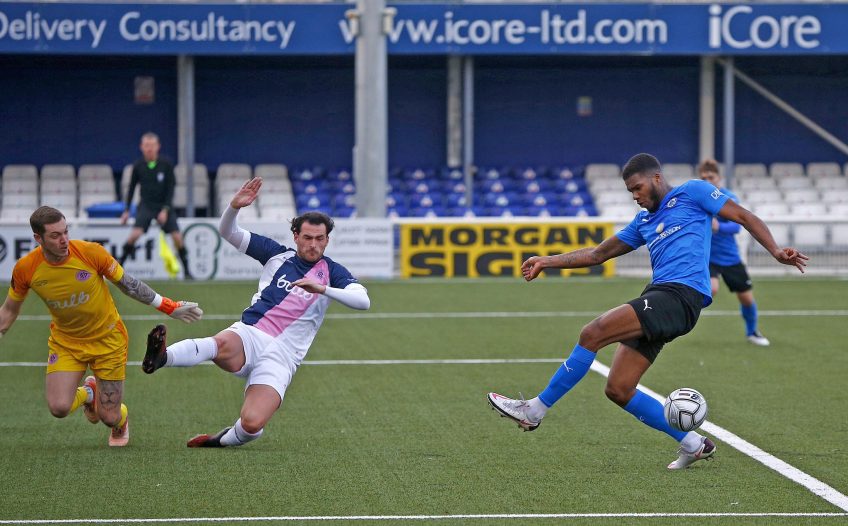 Foxley, known to Watson during his time at Bishops Stortford and Hungerford, was recruited from the step three club to which he had recently returned. 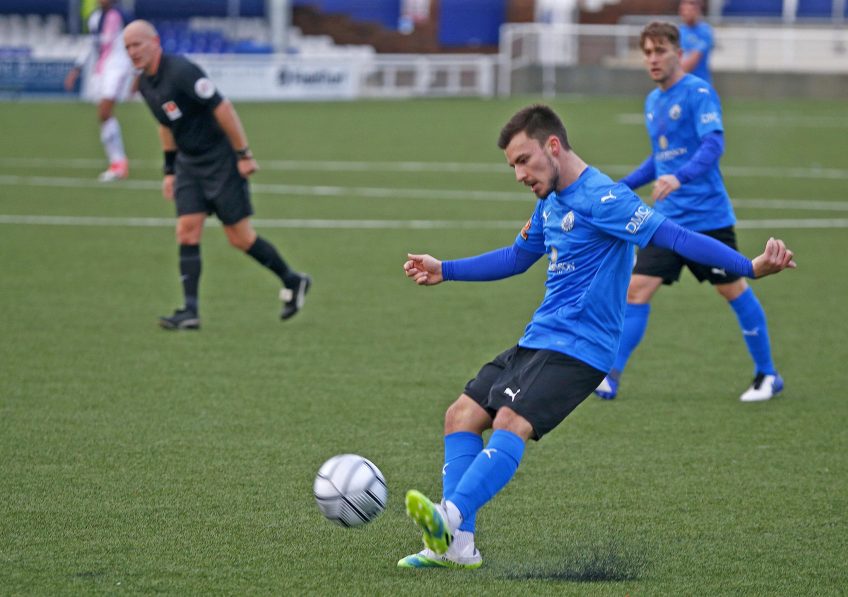 @btfcliveradio Man of the Match Darren Foxley on the ball. Photo Courtesy: @btfc

Dulwich, after a hesitant start in the league, had been firing on all cylinders of late. An impressive four wins out of five, including away victories at Hungerford and Bath City, had propelled them to 11th place.

By contrast, the Blues, down on their luck, with four losses and only one win against Braintree, would not have been an obstacle to provide undue concern.

The curse of the new manager was to rear its head on this occasion for the south-east Londoners. Watson’s influence in a matter of days has been little short of miraculous, turning a hesitant side, often out worked, that could not retain possession, into a confident outfit.

Billericay’s new dynamism, collective work ethic, and delivery of a wing-back formation as it is meant to be played may have taken Dulwich by surprise. It cannot have featured in any of the visitors scouting reports.

The Blues, starting brightly, seemed to take inspiration from sunlight cast across New Lodge. Liburd was involved immediately, adding an extra dimension to the team and visibly inducing an extra spring in the step of Robinson.

No longer isolated, and alone up front, Billericay’s leading scorer at last had aerial support and another frontman to combine with.

After one match, it may well be too early to speak of the two strikers together in the same terms as the treble winning duo of 2018. Based on physical attributes, there is certainly potential for a re-creation of the famous Robinson-Cunnington partnership.

Early signs are promising and of the many centre-forwards that have sought to fill the mantle in recent years, Liburd appears to be the best qualified. It is certainly an enticing prospect to monitor.

The home side’s first attack of note involved the two new recruits. Frankie Sutherland, formerly at Ebbsfleet United during Watson’s spell in charge last season, spread play to the left where Foxley proved to be a willing runner all afternoon. Taking possession, his curling centre found Liburd but the header was too close to Dulwich goalkeeper, Charlie Grainger.

Visiting attacker, Reise Allassani, operating just behind the front pairing of Danny Mills and Ibra Sekajja, was adept at picking up possession in pockets of space. He sounded an early warning with a curling shot that flew just over. A flowing move through midfield followed as Sekajja released Mills through the centre. His fierce drive was inches wide of the near post.

Despite occasional scares, the Blues looked settled in their new formation. Centre-back, Ronnie Henry, constantly barked instructions to pull the back three forward and ensure the right line was maintained. With wing back’s in advanced positions, Billericay frequently used the flanks. Foxley, in particular, made regular forays forward to deliver dangerous centres.

Right wing back, Louis Ramsay, was to initiate the next big opportunity on goal as he found Robinson who had pulled wide on the right. His pull-back drifted across the breadth of the pitch where it was picked up by Sutherland. Squaring to an unmarked Liburd, only just outside the six-yard box, a sprawling Grainger dived to his right and pushed the shot away.

If a visibly angry Liburd knew that he had missed an opportunity that he should have taken, the wait for an opening goal would not be much longer. From the resulting corner, Sutherland’s 25th minute set-piece picked out centre-back Chambers. Heading powerfully past the despairing efforts of Sanchez Ming on the line, the ball sailed into the far corner. 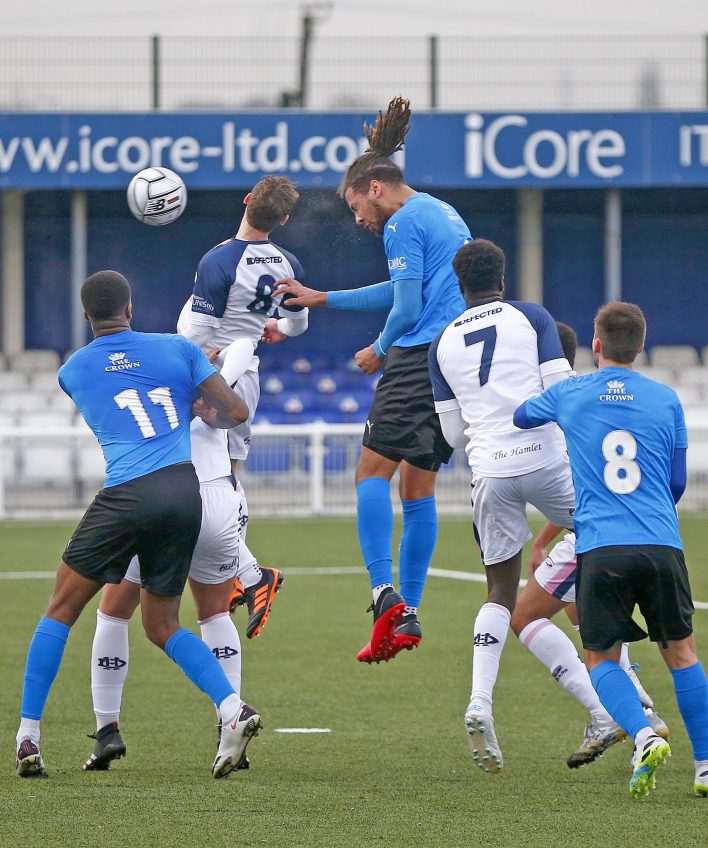 Dulwich sought to hit back straight away as Sekajja evaded the attentions of Sutherland and Foxley to find Mills. Racing through down the right side, he failed to see an unmarked Allassani inside him. Drawing the Billericay defenders, he fired wide as the angle closed.

Just past the half hour as the sun disappeared behind the clouds, Billericay started to dominate as the ball flowed through the midfield and the system started to click. A series of chances followed as Ramsay evaded Dulwich left-back, Andre Blackman, but could only skew high and wide an excellent chance from close range at the far post.

Liburd and Robinson combined as the ex-Welling striker fired powerfully from 30 yards to force Grainger to touch over for a corner. Shortly afterwards, Sutherland’s cross was diverted up into the air by Michael Timlin. Falling on the volley to Robinson, his fierce 15 yards drive knocked Grainger over. The rebound was hit wide and away to the left.

There was no lessening of the intensity after the break as the tigerish tandem of Joe Felix and Frankie Sutherland covered diligently and directed operations wide to willing runners. Robinson curled over on 48 minutes and Dulwich defender, Ronnie Vint, earnt the only booking of the match for what looked an innocuous challenge. Minutes later, he was fortunate to escape dismissal as a more meaningful infringement went unpunished.

It was not until after the hour mark that the visitors started to make any headway. Two separate fouls on the edge of the Billericay penalty area gave Jordan Higgs and Allassani  set-piece opportunities to get back into the match. The former curled well over while Allassani did a little better with his effort as it flew marginally too high for the far post

As the Blues tired, Dulwich began to create more meaningful opportunities. A Blackman cross was touched via Deon Moore to substitute Diogo Barbosa. He could only drive straight at the goalkeeper. A Higgs centre was punched away but to another substitute, Andrew Harris-Sealey. His drive flew across the goal and only just eluded Moore and Barbosa.

As time ticked down, Billericay were holding on and were grateful for wasteful finishing in added time as a superb Higgs cross-field pass found Quade Taylor in the penalty area. For once, getting the wrong side of the defence, his shot lacked conviction and was saved by Palmer.

Pushing forward aggressively, Dulwich were always liable to get caught on the break and so it proved. After a counter led by Kyel Reid, Ramsay and Ruben Soares Junior combined at a throw-in down by the visitor’s corner flag. Somehow evading Taylor and Timlin, Ramsay crossed to the far post where an unattended Robinson slotted home to make it safe. 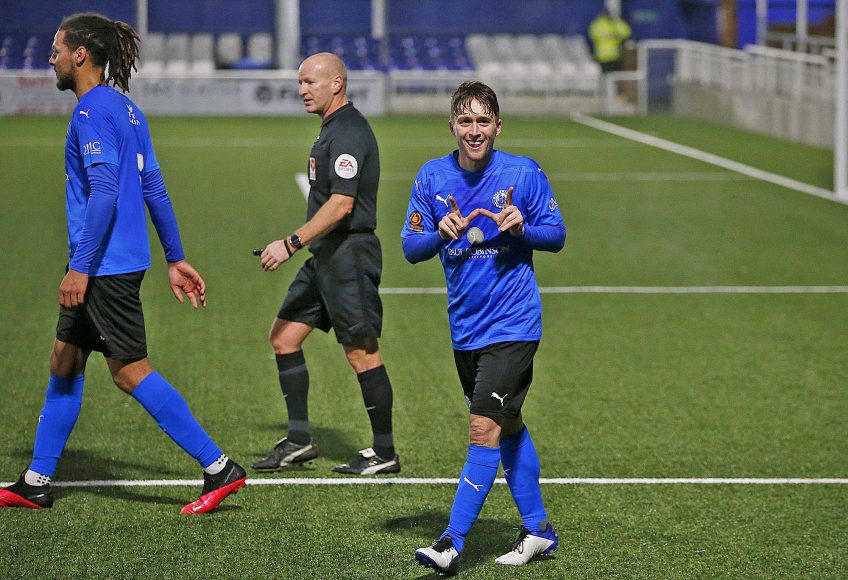 He brought good quality delivery from the left with a series of centres. Conscientious in tracking back, he was rarely caught out in defensive situations. Great debut.