Billericay’s trip to table-topping Dartford looked a tough gig and so it be proved as the struggling Blues were well beaten. Home striker, Charlie Sheringham, piled on the pain with a second half hat-trick on his return to the Darts after a loan spell at Chelmsford City.

If the recent appointment of a new man at the helm of Billericay  had sparked relief, this match served to illustrate why Kevin Watson was called upon in the first place. It could have been worse than three goals in the end. Chances created by a rampant home side were numerous but a combination of wasteful finishing and defensive endeavour limited damage.

Installed late last week, and armed with only one training session, Watson will not formally be in sole charge until next Saturday when Dulwich Hamlet visit New Lodge. That said, the team unmistakably bore his imprint, aligned in a back three with wing backs. It may not have worked last night but, with new recruits on the way, the gaps will be filled. 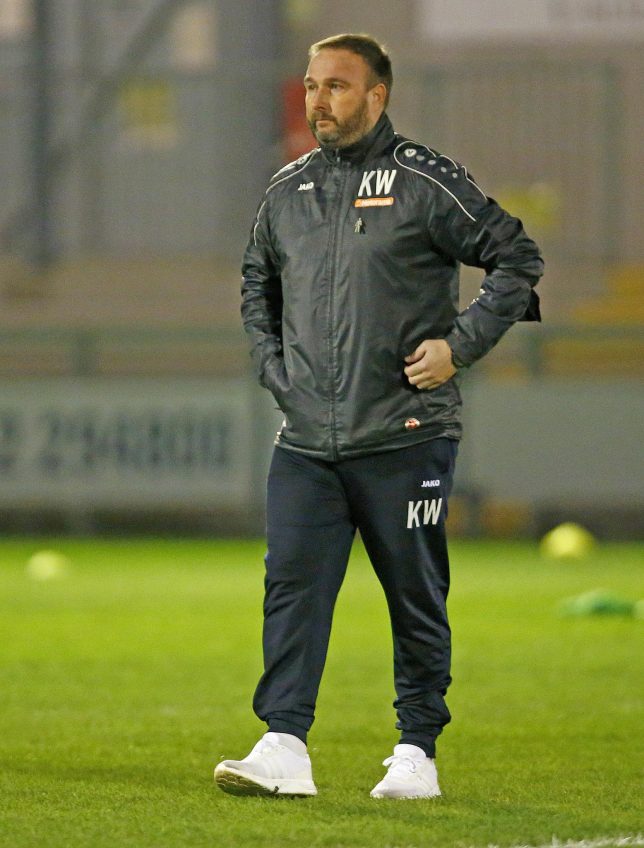 On taking the role, Watson had confirmed that all in the squad would be given an opportunity to make their case on the pitch for a place in the team. If the match was designed as an audition, there was very little X factor on show on a freezing Kent night. The only certainty is that all entrants will need to pass to boot-camp to sharpen up fitness levels.

Darts, missing seven players, and obliged to make five changes, may have had concerns pre-match on how the side would perform. The fans needn’t have worried as the incoming David Ijaha was a tower of strength in midfield, Josh Hill dominated at the back, Sheringham continued the scoring run, and goalkeeper Jonathan Wilkes was barely troubled. Centre-back, Tom Bonner, drew the short straw but was diligent in the unfamiliar left back role.

Billericay were under pressure from the start conceding a string of corners in the opening minutes. Goalkeeper, Harry Palmer, Watson’s first signing, was immediately thrust into the midst of the action as a centre deflected off his gloves onto the head of Connor Essam. Michael Chambers stationed on the line hacked the goal-bound effort away in the nick of time.

Pouring forward, the home side pressed aggressively. From a combination of forced errors, and sloppy play, the Blues regularly handed back possession to the Darts. Exploiting spaces on the flanks, Femi Akinwande burst forward to feed Sheringham who had pulled onto the right side. His deep cross saw Nassim L’Ghoul place a powerful header too close to Palmer.

Sheringham next gave an indication of what an influence he would have during the match. Finding space at the far post, his header from Essam’s centre was well caught by Palmer. In response, Billericay’s forays up field were limited with Jake Robinson the liveliest attacker. Alighting on a long ball from Ruben Soares Junior, the striker hit a shot at Wilkes from a tight angle. 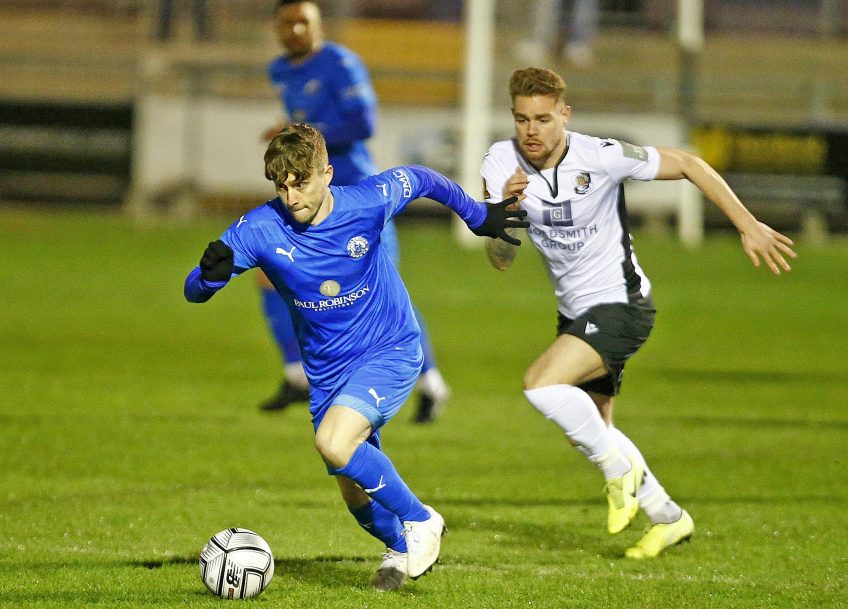 Curiously, Dartford have not had much goalscoring success this season in the first half. Taking in FA Trophy matches, it totalled eleven previous games, home and away, since three goals at Hemel in early November. A long-range effort from Essam just before the half hour almost ended the drought. After a free-kick had initially been cleared by Billericay, the centre-back hit a sumptuous strike that rattled the crossbar, bounced down on the line, but stayed out.

The Blues did not lack for effort with Billy Knott toiling to offer quality in a workmanlike midfield. Just after the half hour, spotting a run down the right from Robinson, he delivered a pinpoint pass but could not reach the return as the ball was arrowed back. On dual registration from Bowers & Pitsea, where he has performed well. His sprint into the penalty area had the air of a player desperate to impress and avert a return to step three. 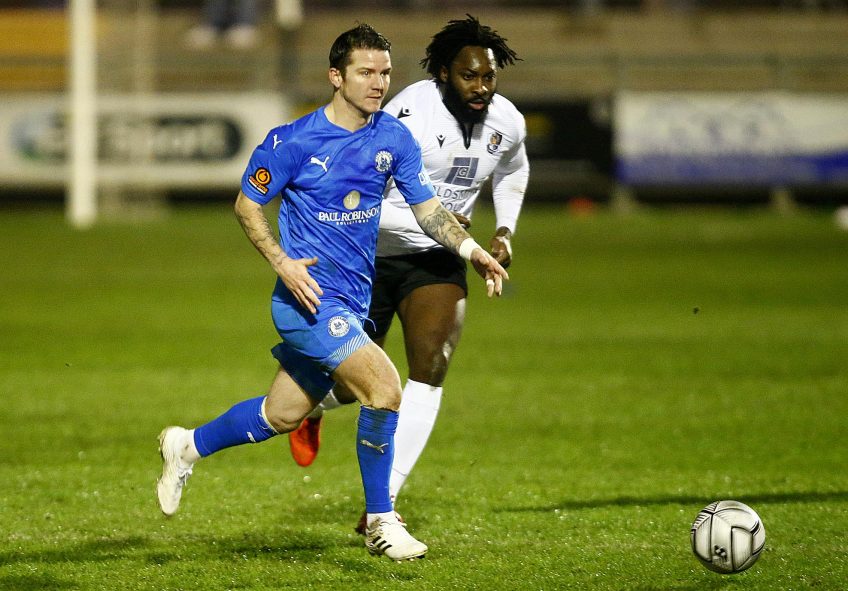 For Akinwande, it was only his second match after recently joining on loan from League Two, Stevenage. A graduate of the Dartford academy, his previous spell yielded a lone Kent Senior cup match appearance back in 2014. The former Billericay striker, soon made a nuisance of himself, forcing Kyel Reid to trip him whilst in full flight.

Whilst his movement cannot be faulted, a period of limited action at the League club has left his finishing a little rusty. After receiving possession from Bonner, Akinwande fired a twenty-yard strike over and out of the stadium. Moments later, he fared better with a fierce shot that Palmer had to push away after a good ball from Jack Jebb found him in space.

After the break, Billericay started strongly forcing the home defence to take evasive action to clear after a Knott free-kick freed Frankie Sutherland to fire a cross into the six-yard box. The tide soon turned as Palmer blocked a low Sheringham drive and patient build-up play on the edge of the penalty area could only produce a rising shot over the bar from Ijala.

Blues had to wait fifty minutes for their first corner. Sutherland’s set piece saw Robinson tumble to the floor in a scramble of bodies. Soares Junior saw his effort hit the grounded Essam and fly wide. Appeals for handball went unheard. From the second corner, Reid’s twenty-yard strike was well-executed but was inadvertently blocked by a team-mate.

Dartford’s response was a corner of their own, which brought Sheringham the opening goal. Initially cleared by Chambers, L’Ghoul and Bonner combined as the latter sent a deep cross to the far post. Essam’s header back troubled Palmer who could only half-stop the effort. Sheringham pounced to easily slot home from close range in the fifty seventh minute.

Sensing weakness, Dartford continued to surge forward. Akinwande went close smashing in a shot that Lawrie Wilson cleared off the line. Moments later, a wild finish by the same player from just inside the penalty area let the struggling visitors off the hook. With Billericay centre-back, Chambers only recently booked, a further offence on Akinwande looked to spell the end for the defender. Escaping with a lecture, he was soon subbed off as a precaution. 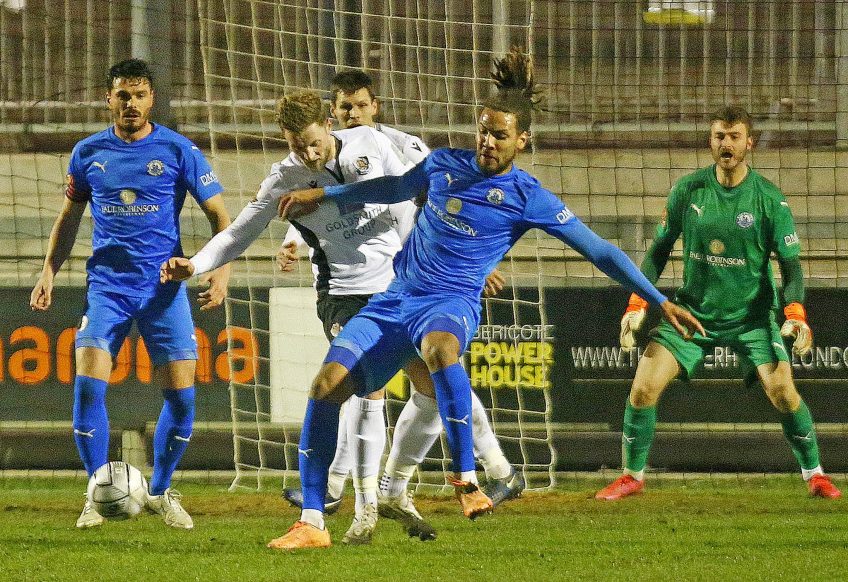 It would not be long until the second goal arrived. Again, Sheringham delivered. Showing intelligent movement at the near post, he headed home from Jebb’s driven free-kick on sixty seven minutes. There would be time for the hat-trick as the eighty fourth minute penalty fortunately earned by L’Ghoul was converted by the returning striker. By then, the result was no longer in doubt and a third goal probably reflected the tide of the match.