Honours Even in Billericay Chelmsford Derby.


Billericay and Chelmsford shared six goals as honours remained even in the Essex derby. Two Rowan Liburd strikes and a finish from Jake Robinson seemed to settle the match as the home side raced into the lead. Stung into action, the Clarets rallied to secure an unlikely point through new striker, Jake Cass, a set-piece from Tom Wraight, and Adam Morgan.

In a keenly awaited match, that had been postponed on two previous occasions, the timing of the encounter was perfect for both clubs. Billericay, poor for much of the season, had revived significantly under fresh management and seen new players added to the squad. Buoyed by a vital home win against Dulwich only three days’ earlier, confidence was high.

For their part, Chelmsford have been victims of faltering form and some shuddering home losses. On the road, better performances have come and none more convincing than the last match – deserved victory against hitherto undefeated St Albans. The departure of prolific loanee striker, Charlie Sheringham, back to Dartford was the one draw-back.

Heading into this fixture, that this could be the last match of the season for both clubs was a distinct possibility. That shadow has grown ever darker in subsequent days. With funding precipitously withdrawn, and replaced by wholly inadequate loan proposals, a good old-fashioned crisis has been generated when current arrangements were working.

If a gusty Tuesday evening at New Lodge is to provide the backdrop to the end of the current season for these Essex neighbours, what a way to finish! For the Blues, the machine purred, if only for spells, the team shape brought dynamism, the finishing was clinical. Granted, there is still fallibility as intensity waned during the game. As a package, there was enough on display to suggest that this team is evolving in a promising direction.

For the Clarets, there is the frustration of conceding goals and being dominated for spells. But the positives are many and the character of the team shone through. Heads never bowed, always in the match, and never any acceptance of defeat. The right shape may still be in progress; but talented individuals worked the team level. Lacking a prolific striker, Cass auditioned well for the role, opening his account and providing an attacking fulcrum.

Billericay started strongly, deploying a previously unseen level of intensity. Quick to close and press high, more work was done in the first ten minutes than ever seen during a full match under previous leadership. If the opponents were surprised, and there is every chance that they were, keen Blues watchers must have been equally stunned.

Combine hard work with quick incisive passing and soon chances will come. Robinson proved the point with an intelligent pass across the pitch.  Luxuriating in the space available, Ramsay burst into the penalty area from the right side. Only the trusty boot of the watchful Wraight saved the day. His left foot would later make a vital contribution for the visitors.

Despite the best efforts of the home side, the seed did not always fall on thorny ground for Chelmsford. Green shoots of promising attacks were provided by the advances on the right of wing-back Danny Imray and the endeavour of creative midfielder, Callum Harrison.

Hard work crafted the first opportunity as Morgan picked Joe Felix’s pocket in central midfield to steal the ball. Advancing forward, he let fly powerfully from 30 yards. An ambitious strike, it was fully justified as it only whizzed marginally over the bar.

What followed was likely to be the most stunning displays of football excellence in any five minutes spell ever seen by a Billericay fan. The team were simply unplayable as they raced into an unexpected three goal lead. There was no answer as the Blues racked up the pressing sequences to continually recover possession in the opposition half, push the ball forward quickly, and, incredibly, finish every chance that came their way.

It started with Lawrie Wilson as the Blues recorded yet another positive pressing sequence. Marking tight enough to figuratively climb into the opponents shorts, possession was won on the opponents third pass. Felix joined in and instantly found advanced midfielder, Jai Reason. He deflected to his left into the path of the onrushing striker, Liburd. The new arrival lashed home a low shot into the far corner from 30 yards on 15 minutes. 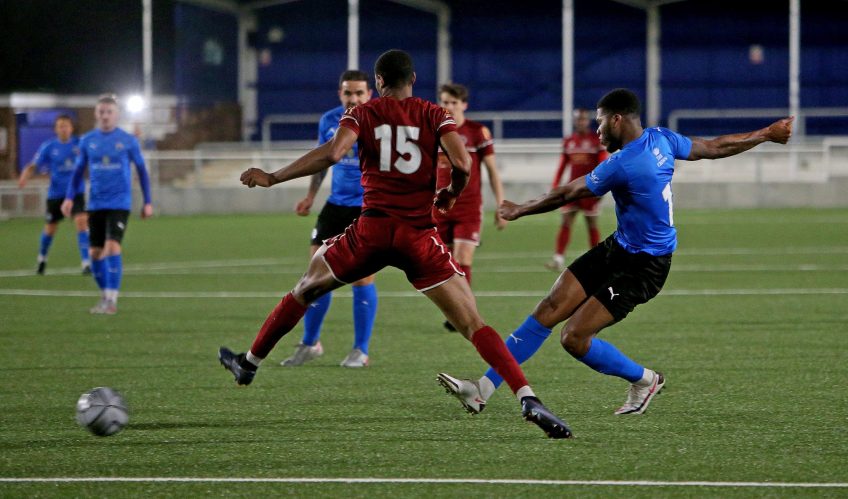 Under Kevin Watson, defender Michael Chambers has enjoyed improved form. An assured passer, his role as the first building block in developing play has been enhanced. He showed why with a superb pass to Reason that pierced the opponents’ defensive line in midfield. An angled ball from the play maker proved the perfect opportunity for Robinson to get beyond the defence. He took it, angling a careful finish into the far corner on 17 minutes. 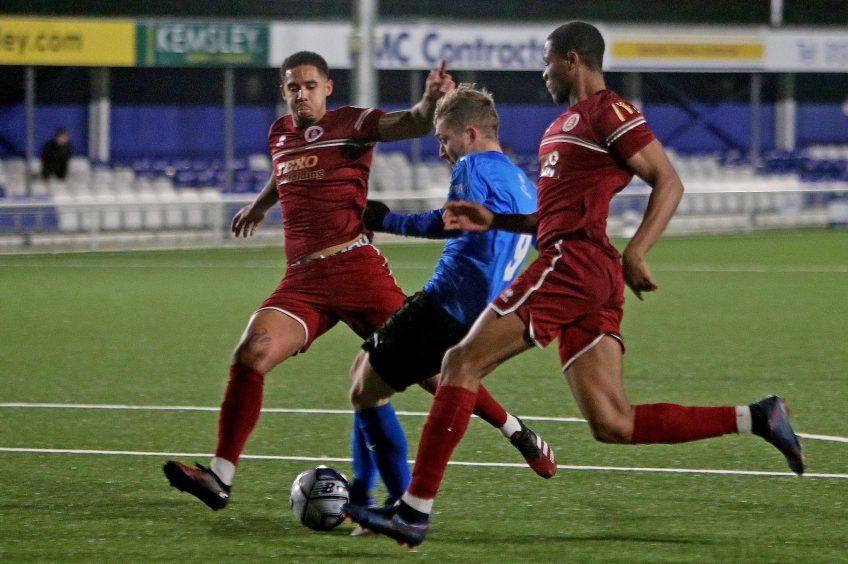 A quick free kick from Frankie Sutherland, after another incisive Chambers pass to Liburd had brought the foul, was to prove decisive for the third strike on 20 minutes. Switching play, he found Ramsay on the far side of the penalty area. Spending no time on the ball, a quick centre to the unmarked Liburd was side-footed home at close range by the striker. 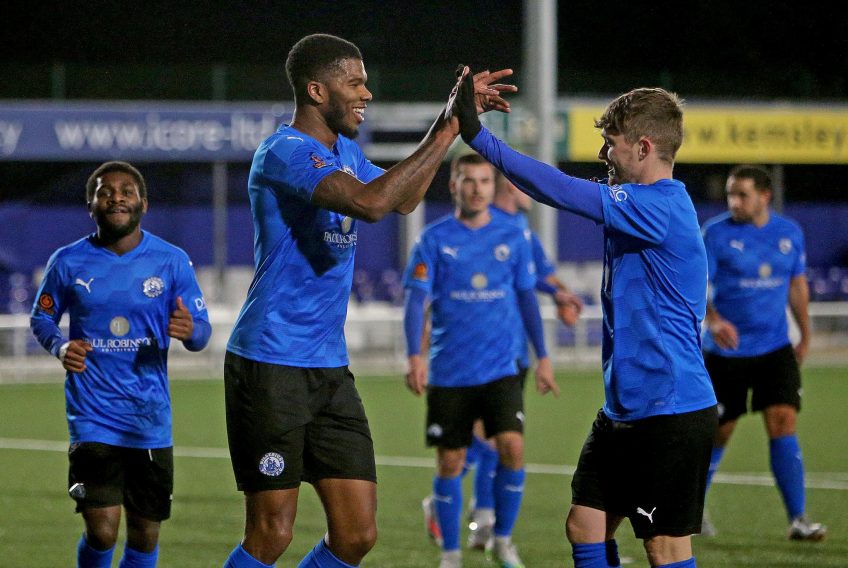 With the Blues hitting a sweet spot, the chances flowed as attacks built patiently. An accumulation of passes across the pitch, including sudden switches of play, and instant through balls wrought havoc. After the match, Billericay would have cause to regret letting opponents off the hook as presentable opportunities for further goals were missed.

Robinson, a skilful finisher, may consider himself unlucky to have volleyed wide after latching onto a fortuitous rebound. No such luxury applies to Ramsay. He is likely to still be wondering how he has not registered his first goal of the season for his new employers. Clean through, he crashed a shot past Lee Worgan but found only the angle of post and bar.

If the Clarets were down, they certainly were not out as Cass headed home Harrison’s set piece. Denied by the linesman’s flag, three goals in deficit, the visitors could easily have decided that it was not their night, sulked, and hoped for revenge at a later date. To their credit, and the Blues regret, sleeves were rolled up and work-rate intensified. A way was found back into the game quicker than even manager Robbie Simpson may have expected. 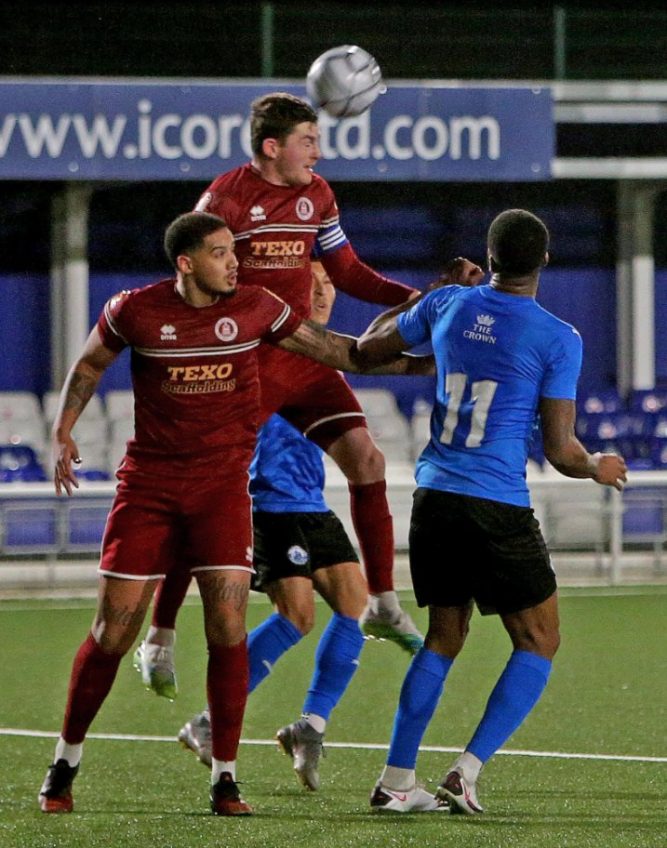 Two goals in four minutes from the visitors ensured that the match was very much alive for the second half. Birthday boy, Ward, the main passer from the back, sent a raking forward ball, via a clever headed flick from Morgan, beyond the Billericay back-line. Cass proved more alert than his opponents, racing through to round Harry Palmer and fire home.

On 44 minutes, enter the Wraight left boot for a set-piece after Cass was brought down adjacent to the right touchline. A left winger by trade but, of late, he has had to compromise by taking up a more defensive role down the left side. Let loose on the free kick, his fine strike curled into the net to reduce the deficit to a single goal. Beaten at his near-post, goalkeeper Palmer may have cause to reflect on whether his positioning was awry.

An even second period saw chances fall the way of both sides. On the hour, the visitors drew level as Imray found Dylan Asonganyi advanced on the right. Evading Darren Foxley, and the covering Chambers, his cross spelt danger. Climbing above his marker, Morgan, in a central position, headed home his seventh goal of the season from close range.

Feeling confident enough to push forward far more aggressively than he did at St Albans, Wraight smashed a shot against Palmer that the keeper knew little about. The visitors continued to probe as Cass headed off target and Henry deflected a free-kick just wide.

Billericay had their own chances to win in the last quarter as a headed Liburd flick saw a Robinson snapshot from range zoom inches wide. Another Liburd connected move ended with Foxley, still storming forward in the closing minutes, driving into the side netting.

There was time for a real bone crusher of a tackle from Wraight on Sutherland that drew yellow. Overall, the match unfolded in competitive spirit but, in the image of both managers that seem more tuned in to the finer points of the game, this was played in the right spirit.

Somehow, a draw seemed the fair result. Billericay’s class shone bright but spluttered at times. Chelmsford stayed in the game when the chips were down and struck back confidently. With both lowly in the league by usual standards, each has more work to do.