We’ve been giving Miles Grindey’s latest track “Make Up Your Mind” a lot of airplay on Phoenix FM recently – and we caught up with the artist to talk about his love of music and his inspirations. 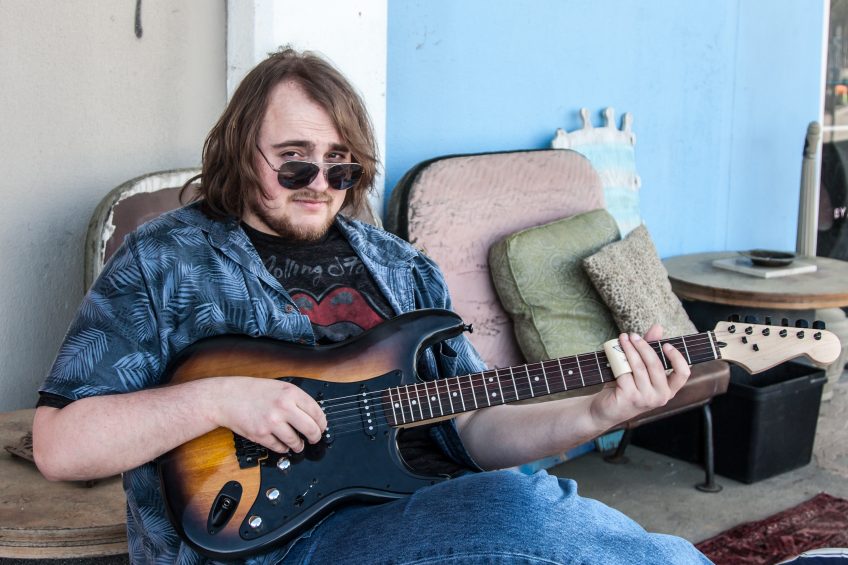 My name is Miles Grindey, I am a musician from Southampton. I’ve been a guitar player since the age of 9, although I really started to “bother” when I was 14. From 2015 to last year I was studying Politics at The University of Brighton, where I managed to graduate (somehow!). From November 2018 to May this year I was in Atlanta, GA where I was working on my music and attending various gigs and jams across the area (minus a brief stint back home in January).

When did you start to develop a passion for music?

It’s in my blood! My parents were both into music so I was surrounded by it. They were both out in LA in the late 80s. My parents made me learn guitar and despite my initial kicking and screaming it turned out quite well. It wasn’t until I was 14 and I was off from school, I saw a video of Eddie Van Halen doing a live version of Eruption on YouTube and I thought “I wanna do that!”.

I remember being in the car with Guns N Roses and Aerosmith blaring out around the age of 5 I think, maybe younger! However my independent tastes, shall we say, came about when I was probably 7. I was into The Who and The Beatles, eventually a little bit of Bowie and Led Zeppelin. Video games played a big factor in my taste, Vice City was the gamechanger and then Saints Row (the first one). I remember being in absolute awe of the energy that those songs were giving off. Then it was Van Halen, I was blown away, I wanted to do all that!

My first recording was when I was the lead guitarist for The Bones and Arrows, we recorded two tracks in Under The Bridge studios in Brighton. We recorded two tracks, “Muddy Sunshine” (which I wrote the chorus progression and solo) and “Slow Light” (which again, I wrote the solo for). That EP was released (including one instrumental done by the lead singer) back in early 2016. After leaving the band I went on to pursue a solo career which resulted in me recording an EP called “Keeping My Sanity” in early 2017 on Soundcloud, which was just me messing around. However I recorded my first album “Caught in a Storm” in the summer of 2017 before releasing it in January 2018 – all proceeds from that release are donated to Mind UK. Then I released my first single “Ethereal Bollocks” which was released on May 4th 2018. I attempted a few bands before graduating and upon my return home I found myself recording demos for my upcoming second album. This eventually led me to Atlanta, GA where I recorded my latest single “Make Up Your Mind” which features Ian Michael Bruh (vocals), Enrico Galetta (bass), Wayne Viar (drums) and Bill Hart (keys). It was released on May 31st 2019.

How would you describe your sound?

Old school sounds brought up to modern standards with originality.

I’m enjoying a lot of things that are being sent to me right now – which I put together in my Spotify playlist “Poppin’ N Rockin'”. I tend to go through phases, my first one started with Van Halen, then it moved to Def Leppard, Winger, Blues, REM, Foreigner, Aerosmith, a ridiculous amount of various artists from the 80s, Don Henley, Robert Palmer. They all influence my work in some way, occasionally there’s some blending but I feel I learn a lot from them.

I’ve mentioned in an interview that my dream collaboration would be with Kit Trigg, that guy is just fantastic – the music he comes out with is just so raw and authentic. I’m a big fan since one of my coursemates at Uni introduced me to his stuff. I’d love to do a blues track with him.

First things first, I really need to finish this album off. As with any creative project it’s all subject to change due to various swings and roundabouts. However I do have plans to get into the studio sometime in the next month or two with some killer musicians from Southampton, but I don’t want to give too much away at this point.