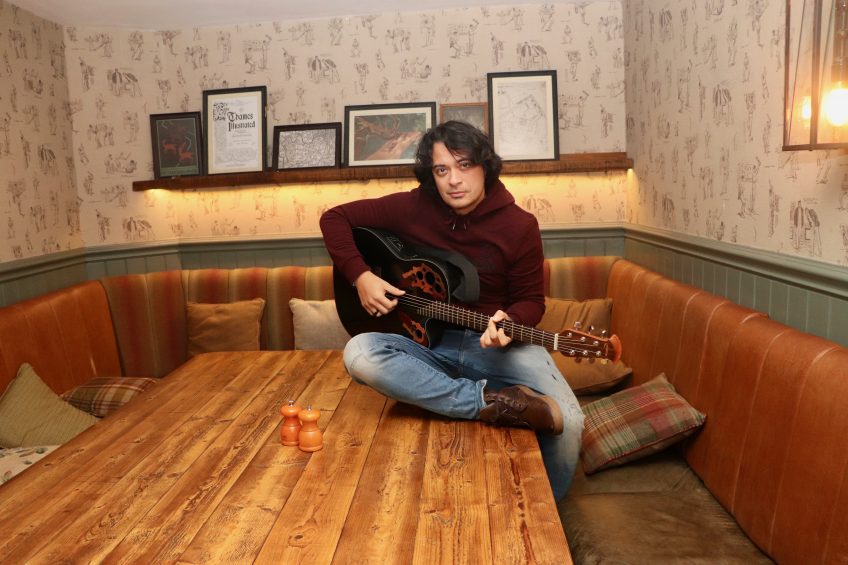 We’ve been giving Angelo V lots of airplay recently on Phoenix FM – but who is he? We had a chat with Angelo to find out about his musical loves and inspirations.

My name is Angelo. I’m half Italian half Filipino and was born in Chertsey near Woking, but don’t hold that against me. I moved to London when I was 2. I grew up trilingual speaking Italian, Filipino and English. I moved to Exeter in Devon when I was 18 and spent 11 years living there which actually influenced my music a lot giving it a touch of hippy soul. I’m a city boy with a country heart.

For as long as I can remember I was writing song lyrics long before I even knew how to play the guitar. I was inspired by my Uncle John when I was about 12 who introduced me to the Brit pop bands for the 90’s like Radiohead and Blur. From then it took a long time for me to find my flow with my music, with me even taking a long break from it only to find my way in recent years. Now I can’t imagine my life without creating it every single day. I spent so much time worrying about finding my own sound that like everything else, once you stop consciously thinking about it it manifests naturally.

I was completely mesmerised by Michael Jackson growing up; his choreography, his songs, his persona and the all-round mystique that encapsulated him. I wanted to be him and I used to dance like him at all the kids parties. When I was about 13 my mum took me to see Buddy Holly the Musical in London and I really connected with his music and the story of his life. I still play some of his songs live to this day; the slightly modern version. As a teenager I graduated onto Radiohead, Blur, Stereophonics, all the best British bands, then moved onto Nirvana, Offspring, The Living End. In recent years I’ve been on the John Mayer, Fat Freddy’s Drop, Bruno Mars vibes. It’s so fascinating to see the evolution of my musical taste which culminates in my current musical style.

To my previous question answer, an amalgamation of Fat Freddy’s Drop, early John Mayer and Bruno Mars. There are elements from all these guys that inspire and influence me, not to forget the late, great Bob Marley. The may be the smallest things from all of these guys, like Bob’s little yodel cry but they’re there.

So far, 3 singles – Medusa, Dragonfly and Lover’s SOS and an acoustic EP – Other Side of Fear. I will definitely be releasing another single before the year is over.

Dave Matthews Band’s latest album is phenomenal; so melodic and captivating. Billie Eilish is on my playlist at the mo. She’s got an incredible voice and some of her songs are so minimal in their production. I don’t hear either of these artists in my style however they teach me a lot; finding the melody with Dave Matthews Band and how your track can be so minimal and still pull you in. My mentality used to be to put as much in a track as possible thinking that would keep you interested however these days less is more. Then you watch her live Mahogany sessions and the organic, non produced contrast blows you away.

Without a doubt any of my biggest influences and musical heroes, Fat Freddy’s Drop, John Mayer, Bruno Mars or Dave Matthews Band. I used to go to College and jam with Ghostpoet. I love what he’s doing now and the moves he’s making. We haven’t spoken in years but I’m just putting it out there; I would love to collab and make a track with him.

I’ll be promoting my latest release Lover’s SOS for the next month playing at the Distillers on 29th August and Acoustic Sundays at Number Six bar on the 22nd September. I’m also playing at the Harringay Arms on 15th November.

Going back into the Studio in September with the Trio to record my next as of yet undecided song for release in November and no – it’s not a Christmas single! You can join me on the journey with everything coming up on angelo-v.com 😊

Beyond that, festivals next year, I’m coming for you 😉