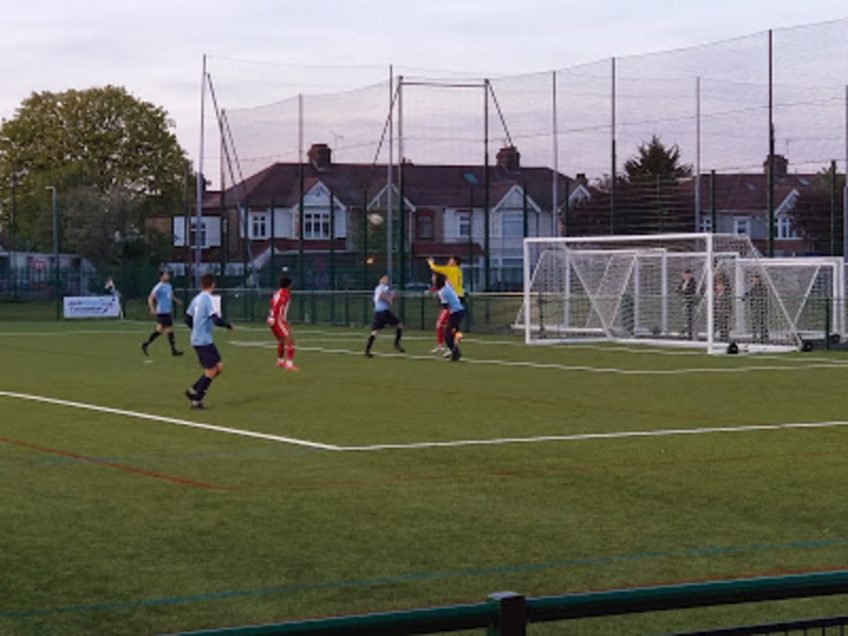 All good things must come to an end; unfortunately for Hadley it was their Vase run that hit the buffers after a titanic battle with Binfield which could have gone either way. Binfield had a couple of early chances, but it was Hadley who scored first – only for it to be ruled out for a foul in the build-up. Solomon Ofori had a chance in the closing stages of an intense end-to-end first half, managing to outpace the Binfield defence but the keeper got down low to make the save. The second half was just as frantic with the Bricks having a shot hit the crossbar, then Anwar had a shot kept out by the visiting keeper. It wasn’t all one-way traffic as the Moles had a number of chances themselves, with the hosts having to spend the closing stages with ten-men after Dwayne Duncan was sent off in the 86th minute. Amazingly the game ended in normal time goalless, so it had to be decided on penalties. It was here were Lady Luck deserted the Bricks as their Hellenic League opponents won the tie 5-4 on penalties, closing the curtain on Hadley’s best ever Vase campaign.

Marcus Crowther and Joe Entwistle were amongst the scorers as Cockfosters finished as runners up in Group A following a 3-2 home win over Hoddesdon who finished bottom and will go into the Plate Semi Final, whilst over at The Harlow Arena St Margaretsbury ended up winning the group after goals from Read and Jermaine Nicholson helped them to a 2-0 success over DTFC who end up finishing third but still qualify for the Last 16.

Second half goals from Melos Ajuazi and Bayemore Ndiaye helped Clapton to all three points against Barkingside, whilst goals from Martin, Kadiri and Fish helped The Motormen to victory over Woodford. It all means Redbridge top the group after maximum points from three games, Clapton end as runners up and Barkingside end up third meaning all three qualify for the last 16, Woodford end the group stages with no points so will go into the Plate Semi Final.

Stansted came from two goals down to net their first win of the competition and as a result get through to the Last 16 as the best placed fourth side. The hosts led 2-0 at the break and were seemingly on course for a second win in three after goals from Gabriel Ipanga Mbambo and Nyan Mesuira, but Stansted fought back in the second period to net a superb win and end up through to the main knockout stages along with Holland, Billericay and FC Clacton.

Barking came from behind to defeat West Essex at Mayesbrook Park on Friday night, James Jewers rocket put West ahead early on but goals from Louis Dillon and Jonny Ashman handed The Blues the win and saw them top the Group with West finishing runners up, and Hackney Wick defeated Frenford at The Drive to qualify for the knockout stages meaning Frenford finish bottom and will contest one of the Plate Semi Finals.

Goals from Luke Skinner, Dominic Locke and Luke Woodword handed Ensign victory at Brimsdown to see them through as Group Winners with a perfect record, Brimsdown are still into the knockout stages though after they finished third, this is because Athletic Newham beat Great Wakering Rovers 6-2 at Terry Mac to see the hosts finish runners up and Wakering end up bottom and in the Plate Semi Final.

Harlow Town Res. made it through to the knockout stage with a comprehensive 5-1 win over Sawbridgeworth Town Res. Hasan Muzib bagged a brace; one apiece were notched by Said Issa, Graeme Butler and Dillon Gordan. Sam Bashua supplied the consellation goal. Louis Maxwell did a similar job for Walthamstow Res. – scoring the lone goal against a barrage that came their way from a Woodford Town U23s side that closed the Group stage with three wins out of three; slamming six past Stow to close the show in style. Graeme Thompson’s hat-trick was added to by Prince Ofori-Duodu, Harry Carter and Esat Saiti. The Quarter Finals for Woodford and Harlow; the Plate competition awaits Sawbridgeworth and Walthamstow.

Redbridge Res and West Essex Development played each other on Thursday evening and the 2-2 draw meant that they were effectively out at the group stage. Landry Gogoa and Chris Kitanos scored for the Motormen’s second-string; while Emmanuel Odunaike and Mohammed Allie scored for the visitors. It meant neither of those two teams would be effected by Saturday’s result, but May & Baker Res. certainly could be as they still had something still to play for. Already qualified, they could top the group if they overturned Tower Hamlets Res. Goals from Paolo Armani Okeye and Abdi Ahmed put paid to those ideas, as Tower Hamlets closed their group campaign with a 2-1 win that sees them top the group with three wins. David Asante-Boateng provided the May & Baker goal.

Barkingside Res. and Grays Athletic both qualify, with similar goal difference and points tallies; joining them will White Ensign Res. who chalked up three points in the group stage and that is enough to also see them progress. Edwards appears on the scoresheet for both Barkingside and Frenford in their Friday night 1-1 draw; Dominic for Side on 48 minutes, while Julian scored the Frenford one. Grays by beating White Ensign 2-0 at least spared themselves the worry of seeing how the other groups finished. Callum Watts scored twice to see his team take the other automatic qualification spot.

Len Cordell Memorial Cup Round Of 16

Any fixture changes will be posted on the league’s twitter page @essexsenior. The live streaming will also continue as we go into the knock out stages and details will also be posted there, as well as on the league website.