Fewer people claim to be following news on social media than a year ago, according to Ofcom’s annual news consumption report.

Compared to a year ago, those who use social media platforms for news also rate them less highly on a range of measures including trust (38% in 2019 vs. 35% in 2020), impartiality (37% vs. 34%) and accuracy (39% vs. 36%). People who get their news from Facebook, Instagram and Twitter are also less inclined to share or retweet trending articles or videos than they were in 2019.

The study, News consumption in the UK 2019/20, looks at how adults and older children (aged 12-15) in the UK consume news across television, radio, print, social media, podcasts, other internet sources and magazines. This report does not explore news consumption during the Covid-19 lockdown; research on this period is available.

Other findings from the research:

After TV (75%), the internet is the next most popular platform for news (65%), followed by radio (42%) Over a third of adults (35%) get news from print newspapers. But, when combining traditional print with newspaper websites and apps, overall use increases to 47%;

Six in 10 older children aged 12-15 claim to be interested in news. Three quarters (77%) said they read, watched or listened to news at least once a week;

Music news attracts the highest levels of interest among older children (57%), followed by celebrity news (45%), serious news about events in the UK, and animals and the environment (both 43%);

The majority (89%) of older children are aware of ‘fake news’, but more than half (55%) of those who use social media for news find it difficult to tell whether stories on these platforms are accurate or not. 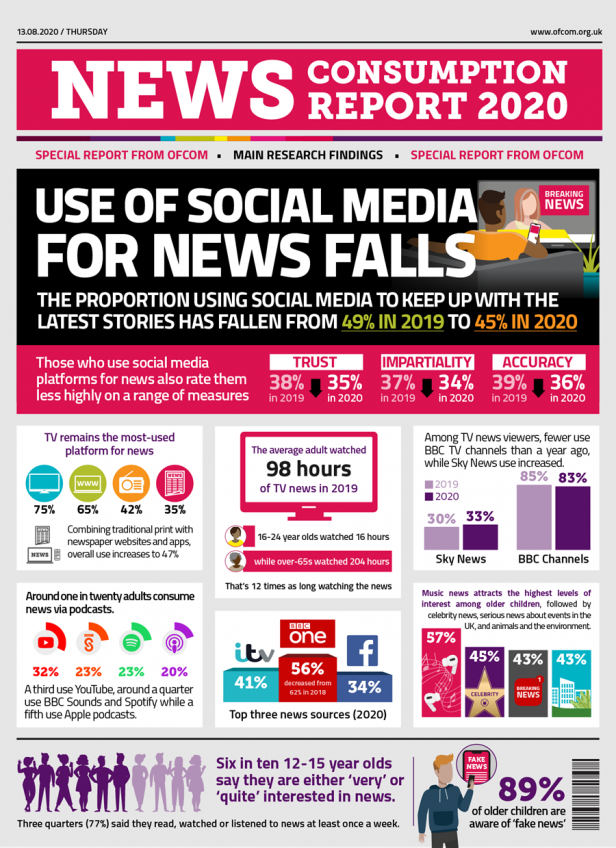