Written by Paul Golder in In The Papers👁 289 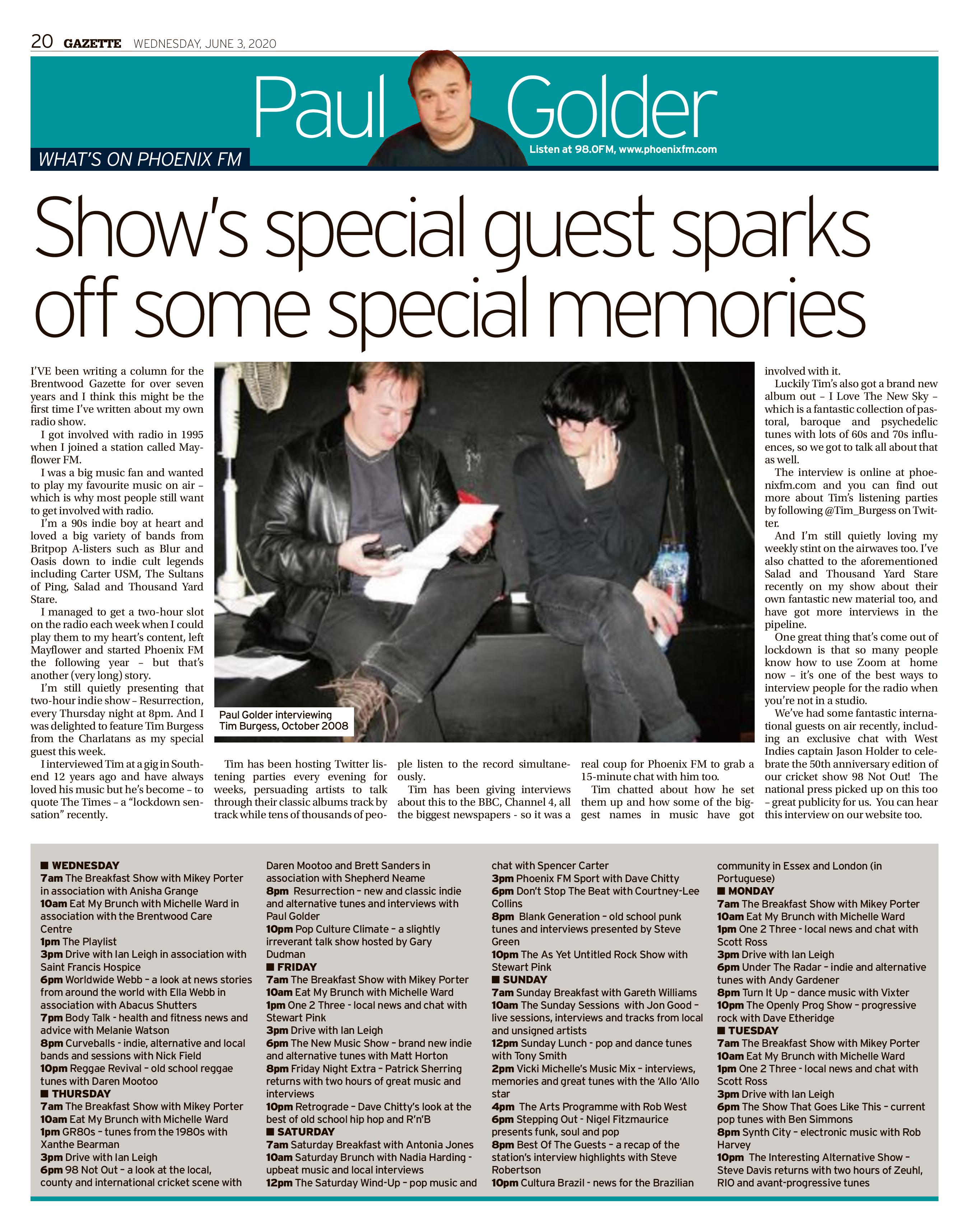 I’ve been writing a column for the Brentwood Gazette for over 7 years and I think this might be the first time I’ve written about my own radio show!

I’m a 90s indie boy at heart and loved a big variety of bands from Britpop A-listers such as Blur and Oasis down to indie cult legends including Carter USM, The Sultans of Ping, Salad and Thousand Yard Stare. I managed to get a 2 hour slot on the radio each week where I could play them to my heart’s content, left Mayflower and started Phoenix FM the following year – but that’s another (very long) story.

I’m still quietly presenting that 2 hour indie show – Resurrection, every Thursday night at 8pm. And I was delighted to feature Tim Burgess from the Charlatans as my special guest this week!

I interviewed Tim at a gig in Southend 12 years ago and have always loved his music but he’s become – to quote the Times – a “lockdown sensation” recently. Tim has been hosting Twitter listening parties every evening for weeks, persuading artists to talk through their classic albums track by track while tens of thousands of people listen to the record simultaneously.

Tim has been giving interviews about this to the BBC, Channel 4, all the biggest newspapers – so it was a real coup for Phoenix FM to grab a 15 minute chat with him too. Tim chatted about how he set them up and how some of the biggest names in music have got involved with it.

Luckily Tim’s also got a brand new album out – I Love The New Sky – which is a fantastic collection of pastrol, baroque and psyechedelic tunes with lots of 60s and 70s influences, so we got to talk all about that as well.

The interview is online at phoenixfm.com and you can find out more about Tim’s listening parties by following @Tim_Burgess on Twitter.

And I’m still quietly loving my weekly stint on the airwaves too! I’ve also chatted to the aforementioned Salad and Thousand Yard Stare recently on my show about their own fantastic new material too, and have got more interviews in the pipeline. One great thing that’s come out of lockdown is that so many people know how to use Zoom at thome now – it’s one of the best ways to interview people for the radio when you’re not in a studio …

** We’ve had some fantastic international guests on air too recently including an exclusive chat with West Indies captain Jason Holder to celebrate the 50th anniversary edition of our cricket show 98 Not Out! The national press picked up on this too, which was great publicity for us. You can hear this interview on our website too.