Written by Paul Golder in In The Papers👁 208 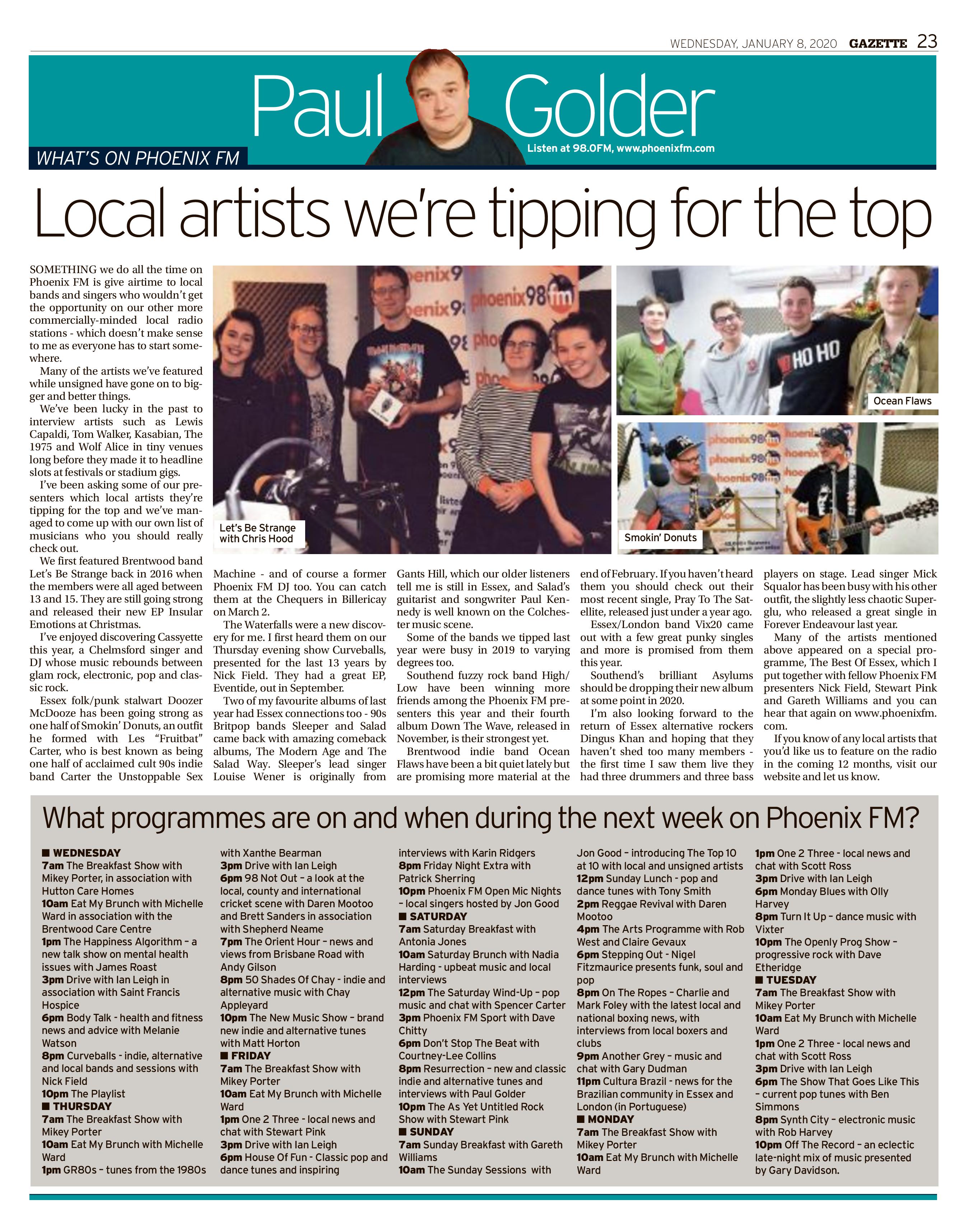 Something we do all the time on Phoenix FM is give airtime to local bands and singers who wouldn’t get the opportunity on our other more commercially-minded local radio stations – which doesn’t make sense to me as everyone has to start somewhere!

Many of the artists we’ve featured while unsigned have gone on to bigger and better things – we’ve been lucky in the past to interview artists such as Lewis Capaldi, Tom Walker, Kasabian, The 1975 and Wolf Alice in tiny venues long before they made it to headline slots on festivals or stadium gigs.

I’ve been asking some of our presenters which local artists they’re tipping for the top and we’ve managed to come up with our own list of musicians who you should really check out.

We first featured Brentwood band LET’S BE STRANGE back in 2016 when the members were all aged between 13 and 15. They are still going strong and released their new EP Insular Emotions at Christmas.

Essex folk/punk stalwart Doozer McDooze has been going strong as one half of SMOKIN’ DONUTS, an outfit he formed with Les “Fruitbat” Carter, who is best known as being one half of acclaimed cult 90s indie band Carter the Unstoppable Sex Machine – and of course a former Phoenix FM DJ too! You can catch them at the Chequers in Billericay on March 2.

THE WATERFALLS were a new discovery for me – I first heard them on our Thursday evening show Curveballs, presented for the last 13 years by Nick Field. They had a great EP, Eventide, out in September.

Two of my favourite albums of last year had Essex connections too – 90s Britpop bands SLEEPER and SALAD came back with amazing comeback albums, The Modern Age and The Salad Way. Sleeper’s lead singer Louise Wener is originally from Gants Hill, which our older listeners tell me is still in Essex, and Salad’s guitarist and songwriter Paul Kennedy is well known on the Colchester music scene.

Some of the bands we tipped last year were busy in 2019 to varying degrees too.

Southend fuzzy rock band HIGH/LOW have been winning more friends among the Phoenix FM presenters this year and their fourth album Down The Wave, released in November, is their strongest yet.

Brentwood indie band OCEAN FLAWS have been a bit quiet lately but are promising more material at the end of February. If you haven’t heard them you should check out their most recent single, Pray To The Satellite, released just under a year ago.

Essex/London band VIX20 came out with a few great punky singles and more is promised from them this year.

Southend’s brilliant ASYLUMS should be dropping their new album at some point in 2020, and if it’s half as good as the first two I’ll be very pleased!

I’m also looking forward to the return of Essex alternative rockers DINGUS KHAN and hoping that they haven’t shed too many members – the first time I saw them live they had three drummers and three bass players on stage. Lead singer Mick Squalor has been buys with his other outfit, the slightly less chaotic SUPERGLU, who released a great single in Forever Endeavour last year.

Many of the artists mentioned above appeared on a special programme, The Best Of Essex, which I put together with fellow Phoenix FM presenters Nick Field, Stewart Pink and Gareth Williams and you can hear that again on phoenixfm.com.

If you know of any local artists that you’d like us to feature on the radio in the coming twelve months, visit our website and let us know!