Promoting the benefits of a healthy lifestyle

Written by Paul Golder in In The Papers👁 414 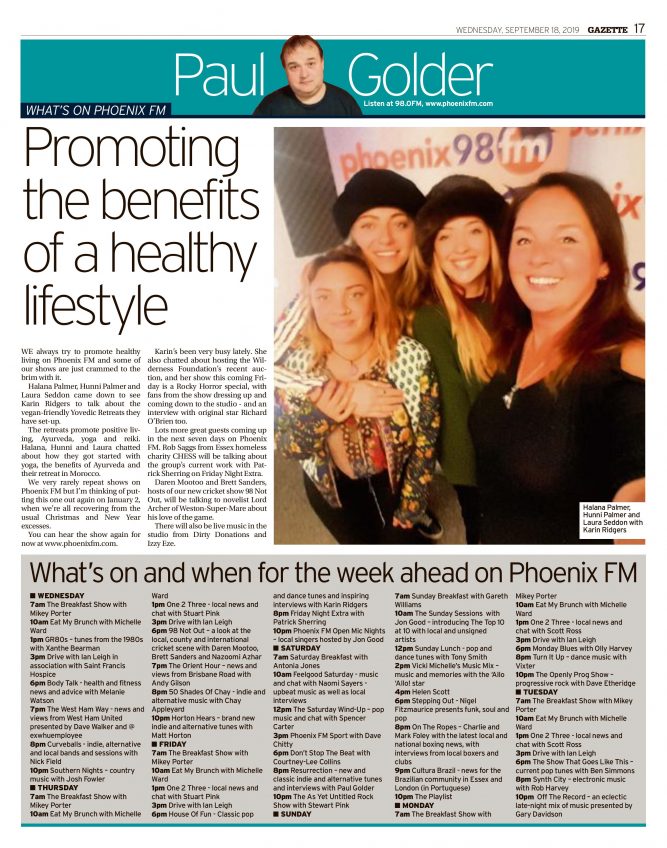 We always try to promote healthy living on Phoenix FM and some of our shows are just crammed to the brim with it!

Halana Palmer, Hunni Palmer and Laura Seddon came down to see Karin Ridgers to talk about the vegan friendly Yovedic Retreats they have set up.

The retreats promote positive living, Ayurveda, yoga and Reiki. Halana, Hunni and Laura chatted about thow they got started with yoga, the benefits of Ayurveda and their retreat in Morocco.

We very rarely repeat shows on Phoenix FM but I’m thinking of putting this one out again on 2nd January when we’re all recovering from the usual Christmas and New Year excesses!

You can hear the show again for now at phoenixfm.com.

Karin’s been very busy lately – she also chatted about hosting the Wilderness Foundation’s recent auction, and her show this coming Friday is a Rocky Horror special, with fans from the show dressing up and coming down to the studio – and an interview with original star Richard O’Brien too.

** Lots more great guests coming up in the next seven days on Phoenix FM.

** Rob Saggs from Essex homeless charity CHESS will be talking about the group’s current work with Patrick Sherring on Friday Night Extra.

** Daren Mootoo and Brett Sanders, hosts of our new cricket show 98 Not Out, will be talking to novelist Lord Archer of Weston-super-Mare about his love of the game.

** There will also be live music in the studio from Dirty Donations and Izzy Eze.