Written by Paul Golder in In The Papers👁 674 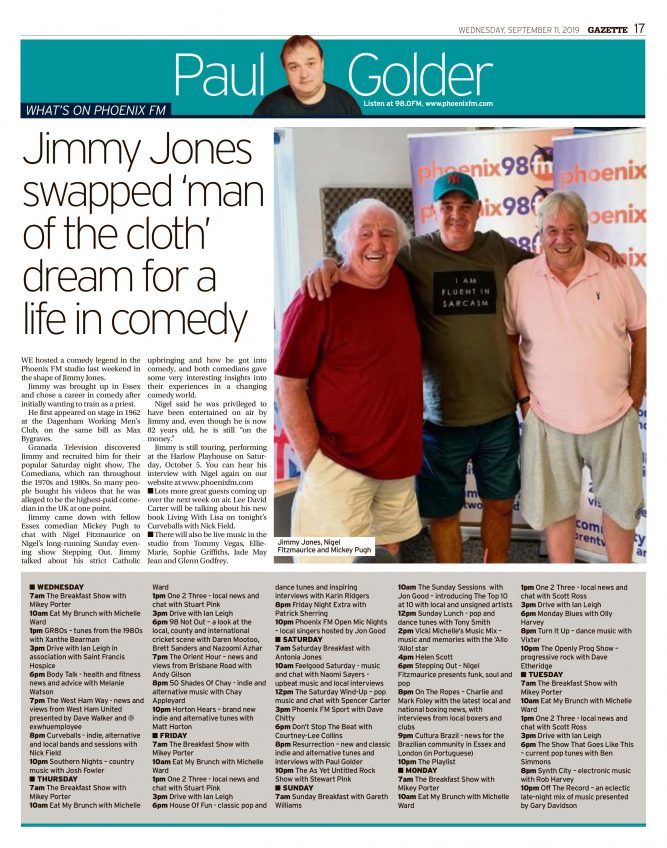 We hosted a comedy legend in the Phoenix FM studio last weekend in the shape of Jimmy Jones.

Jimmy was brought up in Essex and chose a career in comedy after initially wanting to train as a priest. He first appeared on stage in 1962 at the Dagenham Working Men’s Club, on the same bill as Max Bygraves.

Granada Television discovered Jimmy and recruited him for their popular Saturday night show, The Comedians, which ran throughout the 1970s and 1980s. So many people bought his videos that he was alleged to be the highest-paid comedian in the UK at one point.

Jimmy came down with fellow Essex comedian Mickey Pugh to chat with Nigel Fitzmaurice on Nigel’s long-running Sunday evening show Stepping Out. Jimmy talked about his strict Catholic upbringing and how he got into comedy, and both comedians gave some very interesting insights into their experiences in a changing comedy world.

Nigel said he was privileged to have been entertained on air by Jimmy and, even though he is now 82 years old, he is still “on the money”!

Jimmy is still touring, performing at the Harlow Playhouse on October 5th. You can hear his interview with Nigel again on our website at phoenixfm.com.

** Lots more great guests coming up over the next week on air. Lee David Carter will be talking about his new book Living With Lisa on tonight’s Curveballs with Nick Field.

** There will also be live music in the studio from Tommy Vegas, Ellie-Marie, Sophie Griffiths, Jade May Jean and Glenn Godfrey.