Written by Paul Golder in In The Papers👁 437 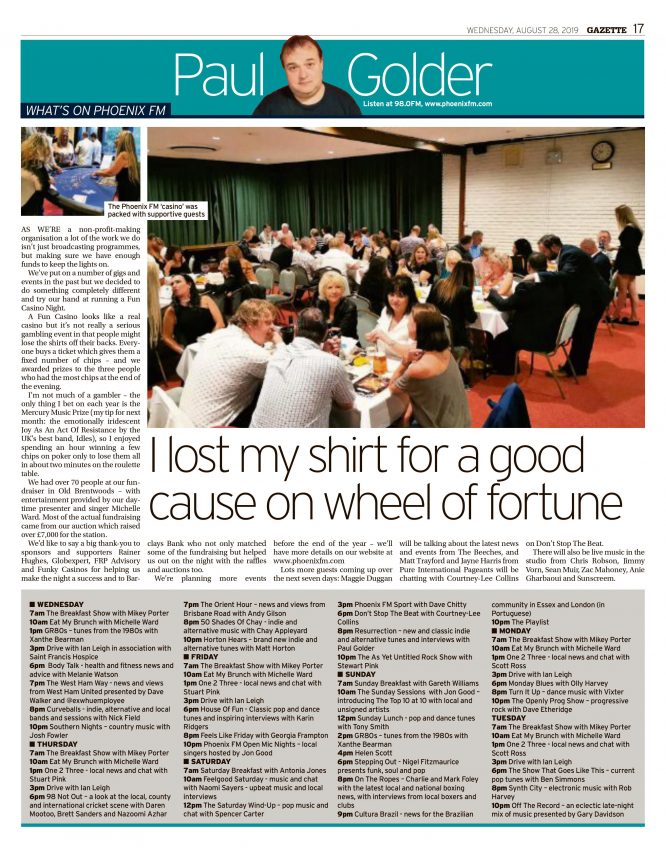 As we’re a non-profit making organisation a lot of the work we do isn’t just broadcasting programmes, but making sure we have enough funds to keep the lights on. We’ve put on a number of gigs and events in the past but we decided to do something completely different and try our hand at running a Fun Casino Night.

A Fun Casino looks like a real casino but it’s not really a serious gambling event in that people might lose the shirts off their backs. Everyone buys a ticket which gives them a fixed number of chips – and we awarded prizes to the three people who had the most chips at the end of the evening.

I’m not much of a gambler – the only thing I bet on each year is the Mercury Music Prize (my tip for next month: the emotionally iridescent Joy As An Act Of Resistance by the UK’s best band, Idles), so I enjoyed spending an hour winning a few chips on poker only to lose them all in about two minutes on the roulette table.

But we had over 70 people at our fundraiser in Old Brentwoods – with entertainment provided by our daytime presenter and singer Michelle Ward. Most of the actual fundraising came from our auction which raised over £7,000 for the station.

We’d like to say a big thank you to sponsors and supporters Rainer Hughes, Globexpert, FRP Advisory and Funky Casinos for helping us make the night a success and to Barclays Bank who not only matched some of the fundraising but helped us out on the night with the raffles and auctions too.

We’re planning more events before the end of the year – we’ll have more details on our website at phoenixfm.com.

** Lots more guests coming up over the next seven days. Maggie Duggan will be talking about the latest news and events from The Beeches, and Matt Trayford and Jayne Harris from Pure International Pageants will be chatting with Courtney-Lee Collins on Don’t Stop The Beat.

** There will also be live music in the studio from Chris Robson, Jimmy Vorn, Sean Muir, Zac Mahoney, Anie Gharbaoui and Sunscreem.