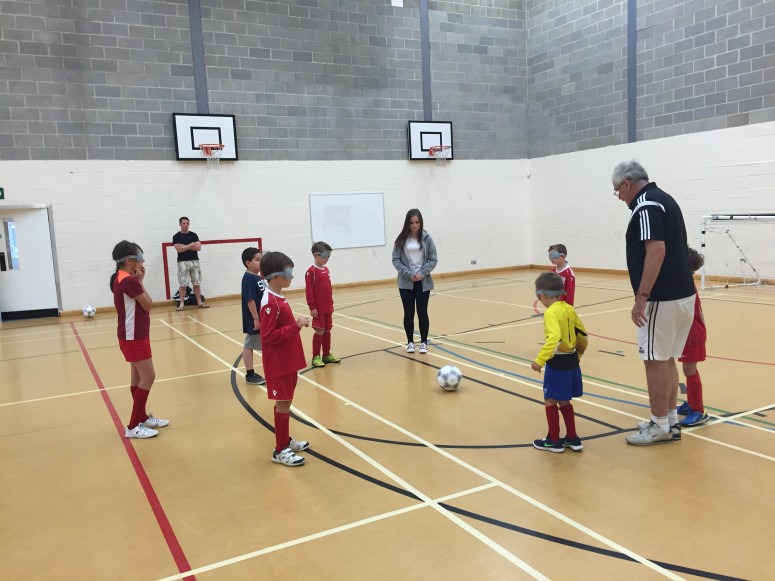 A group of players from Billericay youth football team FC Redwing were able to join their visually impaired friend and experience what it is like to play soccer in his world.

The idea stemmed from a conversation between visually impaired Kieran Webster’s mother and Katherine Gordon the wife of one of the managers of FC Redwing’s U8 teams.

Mark Gordon, Manager of the FC Redwing U8s “Hawks” explains “We have a lot of classmates of Kieran’s playing for our club so when we heard that they would like to play football with each other we decided to see what could be done.  Thanks to a call out on Twitter we made contact with Basildon Soccability who offered to put a special session on for the boys.”

During the session the boys were required to don special blindfolds and perform tasks with a modified ball filled with ball-bearings.  The highlights of the session was a blind penalty shootout and a match at the end.

Basildon Soccability’s Chairman John Smith continues “As we have just started a free weekly session for those who are visually impaired the timing was perfect when we saw FC Redwing’s tweet.  It was great to see the boys really take to this kind of football and be able to play with their friend.  There was a lot of smiling faces out there but perhaps more importantly they got to appreciate how hard it is for Kieran.”

If you have a child who is interested in taking part in Basildon Soccability’s visually impaired football sessions then please contact John Smith on 07814 2227 304 or at smithjohn111rough@googlemail.com.