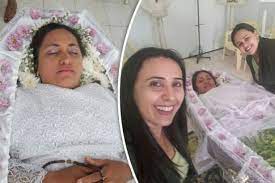 Well 59-year old MAYRA ALONZO, from the Dominican Republic, was so desperate to find out that she decided to stage a full stage rehearsal in the city of Santiago at the end of last month.

Dressed all in white, she turned up for the event, by hearse lying in a coffin she’d rented for the day.

Friends and family then took turns to say their teary goodbyes – fake crying and all, although some apparently did a much better job than others at feigning sadness at the bizarre event.

The unusual gathering set Mayra back about $1,000 (£710), and although she spent several hours inside the coffin, which she said was a very unpleasant experience, her guests enjoyed food and drinks and exchanged stories about her.

So was it money well spent? Well Mayra seems to think so as she later described the gathering as a ‘dream come true’, thanking her friends, family and neighbours who helped her organise the fake funeral!

In the second hour I was joined once again by Margaret Mills, who looked at a building in Matching Green, known variously as The Wedding Breakfast Room or Wedding Feast Room.

The building (which is still in use today) dates back to around 1480 and was built and designed by a local benefactor, one William Chimney.