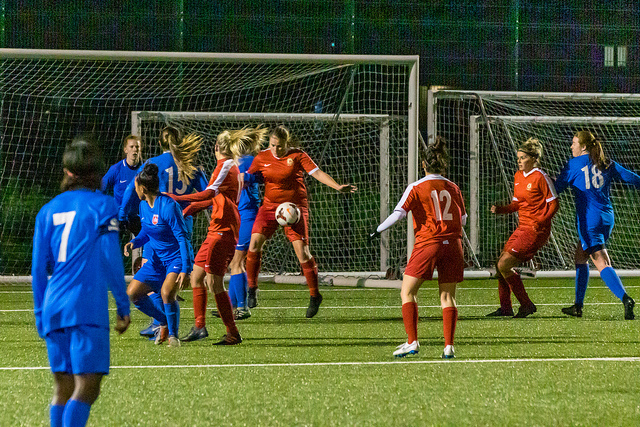 A brace from Chloe Sampson helped Middlesex Ladies seal a second-half fight-back and earn a 4-3 win over Essex in a pulsating Southern Counties Cup fixture.

On the artificial surface at Middlesex’s new Rectory Park base in Northolt, the home county came from behind three times to go top of the North Group table in their final group match.

A mad opening 13 minutes saw the contest tied at 2-2 after Essex’s Paris Smith and Courtney Clarke had strikes cancelled out by levellers from Alessandra Barreca and Lavana Neufville.

The visitors had edged back ahead midway through the first half through Smith’s second goal of the night. Two goals inside the final 15 minutes from Middlesex’s Sampson ultimately clinched the three points, the winner coming with only two minutes remaining.

Essex had raced out of the starting blocks and led with just 3 minutes played as the ball found Paris Smith inside the area and she took a good touch and finished well into the bottom left-hand corner. Five minutes later, Middlesex were level.

Sampson’s corner was headed in by Barreca at the near post. However, the Essex response was even quicker, regaining the lead within a minute. An excellent Kelsey Smith cross was nodded in by Clarke at the far post. But a second Middlesex equaliser wasn’t far away and, with just 13 minutes played, a through ball found Neufville, who rounded Essex goalkeeper Alex Baker and slotted in.

Essex’s Zoe Rushen came close as she rifled into the side netting at the near post, but her side did restore their lead on 23 minutes. Kerry Stimson slotted the ball through to Paris Smith, who finished high into the net.

Smith was then inches away from a hat-trick as she sent a dipping shot inches over the top following Rushen’s lay-off and a speculative, angled lob from Rushen also brought a good save from Middlesex ‘keeper Lizzie Rose, who tipped the ball wide.

The second half couldn’t match the fast start of its predecessor but, midway through the period, Middlesex stopper Rose made an outstanding save to claw Kat Nutman’s header off the goal line after Rushen’s free kick. From a Lucy Jones ball, Essex’s Georgia Holdaway then turned and fired at Rose, who held on well.

Middlesex equalised for a third time on 75 minutes when a low ball through was latched onto by Sampson who finished well past Essex ‘keeper Baker. The winner arrived on 88 minutes as Sampson worked her away into the area and found the far left-hand corner.