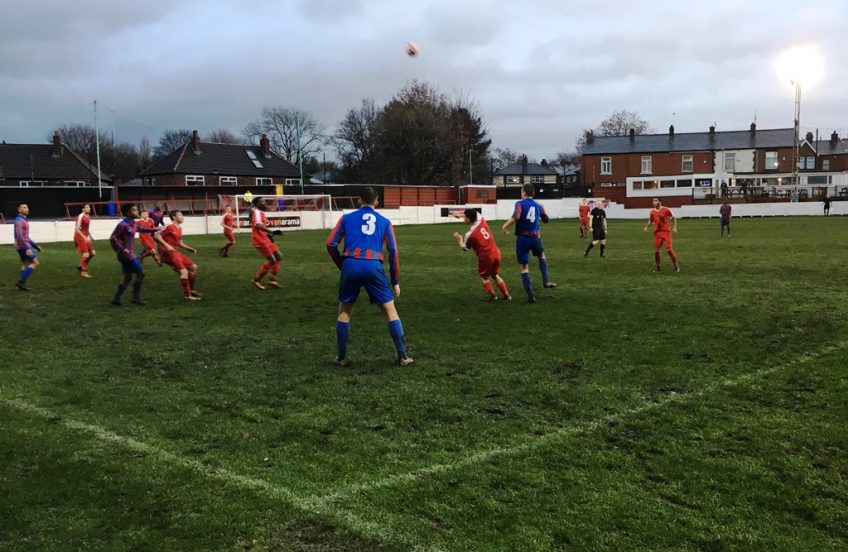 Essex Under 18s slipped to a disappointing FA County Youth Cup exit as a strong Manchester side came from behind to win 4-1 on a wet afternoon at Ashton United FC.

Jess Norey’s fine header had given Essex the lead mid-way through the first half, but the home side levelled through Markell Foulds’ header and, within two minutes, took a lead into half time through Anointed Chukwu. Essex’s Callum Fitzer also saw a penalty well saved.

Another header from skipper Alex Doyle just eight minutes into the second half extended Manchester’s grip on the game before Chukwu sealed the win 12 minutes from time.

Unfortunately for 2012 winners Essex, the result was an exit from the Third Round of the national competition for a seventh straight season, while Manchester go onto a home Quarter-Final with either Berks & Bucks or Cumberland.

The early pressure was applied by Essex as Sofian Maghouz curled a free kick over the top. But the visiting goalkeeper Josh Harrison soon had to be on his toes to make a fine block from Chukwu at the other end. Harrison made another good save, getting down low to his left to tip Marcus Smith’s deflected shot wide.

Essex took the lead on 26 minutes. An excellent Maghouz cross from the left found Norey in space in the box and the midfielder headed a fine finish high into the net. Manchester’s response was prompt, and they were level inside a couple of minutes. A left-flank corner was nodded home by Foulds.

Essex looked to edge back ahead when Obi Molefi’s angled shot was parried out by home ‘keeper George Neave and the loose ball just evaded Norey at the far post. Manchester’s Smith then teed-up Essex-raised Chukwu, who drilled just wide of the far post.

But ex-Thurrock Chukwu forward made no mistake on 34 minutes as he picked the ball up from Emmanuel Ogunrinde and spun and fired into the roof of the net at the near post. Three minutes before the interval, Essex had a chance to level the game again. Molefi was barged over in the penalty area, but Fitzer’s spot kick was brilliantly saved by Neave, diving down to his left.

Unfortunately, the missed opportunity did prove costly early in the second half. Manchester’s Smith had already struck a 20-yard free kick just wide before Doyle firmly headed his side 3-1 ahead from Smith’s corner.

Essex debutant Rashaad Ogun, on from the bench, came inches away from converting a left-wing centre to bring his side back into the game. But, on 78 minutes, the result was put beyond doubt. Chukwu grabbed his second of the afternoon with a deflected shot along the ground which crept past Essex ‘keeper Harrison.