We were delighted to get Salad Undressed – Marijne van der Vlugt, Paul Kennedy and Donald Ross Skinner – down to Brentwood to kick off this year’s Phoenix FM Creative Sessions! 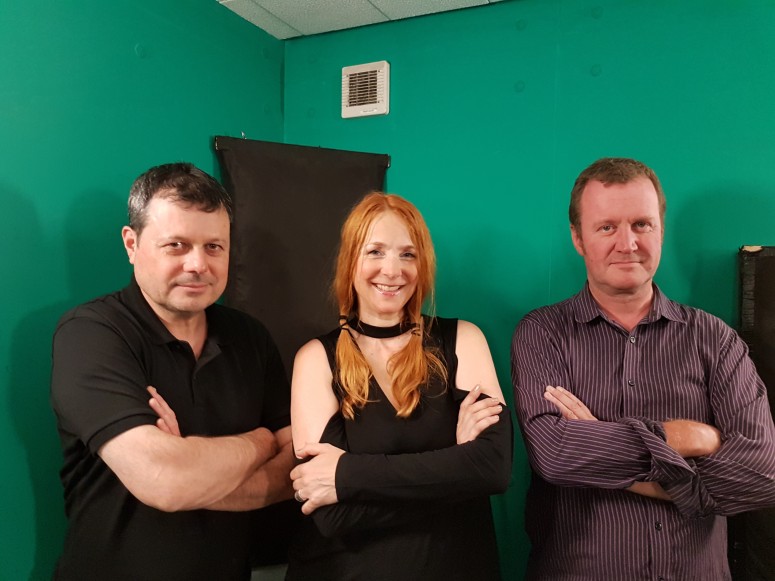 Salad were formed in 1992, with Pete Brown and Rob Wakeman joining Marijne and Paul in the line up. Marijne was keeping busy as one of the roster of MTV VJs broadcasting regularly to the UK and Europe. The band signed to Island Records and released two albums – debut Drink Me, which reached no 16 in the UK album charts in 1995, and Ice Cream in 1997.

The band were joined by Charley Stone – who featured in our Joanne Joanne session in 2013 – as a live guitarist, keyboard player and backing vocalist.

After the band split Marijne formed Cowboy Racer – and we hosted their only radio session back in 2011 when they came down to our former studio at the Baytree Centre in Brentwood.

In 2016 Marijne and Paul decided to get back together to play acoustic Salad numbers at a few gigs. The first one went under the name of the MB’s as a homage to the band’s pre-Salad name (the Merry Babes) but then settled on Salad Undressed after that. And we were there AGAIN to host their first acoustic session in years and years. (Big Salad fans here, obv).

And now we’re pleased to announce that we’ve hosted their first electric (ish) session since the 1990s! Marijne and Paul were joined on bass by Donald Ross Skinner, producer of Ice Cream and long time collaborator with Julian Cope.

We were treated to five tracks – an oldie (Granite Statue), three newies (Being Human, Nowhere Near and Relationship Dust) and a cover (Jefferson Airplane’s 1967 classic White Rabbit).

Salad Undressed are currently writing and recording a new album – Good Love Bad Love – and you can get and two more albums of other recordings on Pledgemusic. And we also heard some exclusive news about what they’re planning straight after that! You can hear the interview again here:

And here’s the audio and video from the recordings:

Phoenix FM has been recording with the Creative Recording Studios in Brentwood since 2005. For more information about their facilities and rates please contact Dave Shalloe on 01277 811886 or visit www.creativemusicstudios.co.uk.