This year’s Creative Sessions are now over! They took place in the Foyer of the Brentwood Centre on 1st and 2nd August. 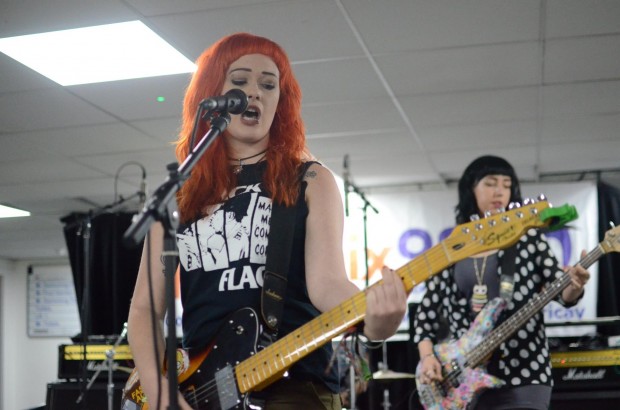 We took a LOT of photos. You can see them all on our Facebook gallery HERE.

The sessions are an annual event which we’ve been staging with the Creative Recording Studios in East Horndon since 2005. In that time we’ve recorded 181 sets of studio-quality recordings for 173 different bands, many of whom had no other access to recording or radio airtime.

Every artist gets an hour on stage to set up, play three songs (or re-play them if they weren’t happy!) and break down again. We take pictures and video, Creative then mix and master the songs, and we then play them on the radio and release them on YouTube too.

We’re now mixing and mastering the recordings and they will be on air and on this website in the next few weeks.

This year’s line up:

Another young singer/songwriter from Grays who regularly performs in the Brentwood area.

Jillian Winter is an acoustic singer/songwriter and tattoo artist from Southend-on-Sea who we caught playing live at the recent Village Green event in Chalkwell Park.

A rock/indie/punk band from Brentwood who will be featuring at September’s Flag Factory Festival in Coxtie Green.

An alternative grunge band from Grays who recently came in to Phoenix FM’s Curveballs show for an acoustic session.

A synthpop quartet from Nantes, France who feature regularly on Rob Harvey’s Synth City show – they’re coming just to record a session for us!

A Polish singer now living in London, who is also a model as well as being an animal rights and vegan activist who has appeared in newspapers all over the world.

An East London punk/funk band who’ve also featured on our Curveballs show in the past.

The Afropop musical project of Ruth Tiriboyi, originally from Murhewa in Zimbabwe and now living in London.

A young singer/songwriter from Southend-on-Sea who has already performed both live on air with us and at our regular Phoenix Fridays shows.

A four-piece rock band from Essex.

An Essex band who’ve played an acoustic set on Phoenix FM, inspired by the music and stories of Soviet Russia.

An acoustic singer/songwriter from Grays who plays blues-tinged rock.

A Chelmsford punktronica quartet with a host of influences including the Prodigy, Muse and the Chemical Brothers.

A Brentwood heavy rock band who have appeared in our Phoenix In The Foyer events and will be headling this year’s Flag Factory Festival.

A quartet from London who play provocative and infectious pop/rock/punk.

An indie/rock quartet from Brentwood who have featured on Phoenix FM several times and played many local events including the Phoenix FM stage at Lighting Up Shenfield.