Written by Scott Ross in One 2 Three, Uncategorized👁 302


It seems that the EVERGREEN vessel that became stuck in the Suez Canal has caused much dismay and frustration across the Netherlands and Belgium where customers are said to have been anxiously awaiting the delivery of 20 containers choc full of sex toys. 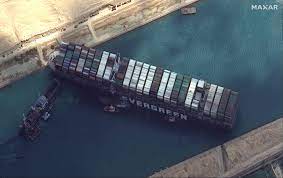 Frustrated consumers may have to wait even longer though as when the log-jam of delayed vessels all arrive at the same time it will be difficult to find sufficient transport to move the goods from the docks.

CEO of EDC Retail, EVERTINE MAGERMAN, has been bemoaning the delays saying they desperately needed a re-stock after being cleared out due to heavy demand over Christmas and Valentine’s Day. Concerns have been expressed that the knock on effect of this calamity could cause a domino effect that could last for 6 months as stockists in China have been unable to shift newly manufactured goods due to a shortage of containers being held up sea.

In the second hour of today’s programme I was joined once more by Margaret Mills with her historical feature which this week concerned a children’s author who hailed from Burnham on Crouch. Her name was MARGARET SCOTT, although she was normally known by her married name – MARGARET GATTY.

If you missed what Margaret said, catch it all here: –

All being well I’ll see you again next week.