Is this stepping out in style?


Now some stories are so bizarre it’s hard to credit belief in them. 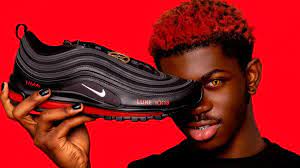 But alleged singer, LIL WAS X, who’s real name is MONTERO LAMAR HILL, has apparently put his name to some so-called SATAN TRAINERS, which are in fact little more than modified versions of the NIKE AIR MAX ’97.

Not surprisingly Nike has sought distance themselves from the product stating that they had no affiliation to, or involvement in the design.

So what makes them so special?

Well first off they sport a pentagram pendant attached to the front but they also contain a drop of human blood in the sole, diluted with with 60 cubic centimetres of red ink.

To add to the connections with Devilry, just 666 pairs were made, all of which, believe it or not,  sold out in less than 1 minute – and that despite the absurd price of $1018 per pair – and just in case you wanted to know that’s the equivalent of £739.

The price in dollars is apparently a reference to a passage in the Bible, in the book of LUKE chapter 10 verse 18 which reads “I saw Satan fall like lightning from heaven.”

Despite this some early purchasers have cashed in on their investment selling them at double, or more, than the original asking price.

Seems some people really do have more money than sense!

For her historical feature this week, Margaret Mills went in search of the lost spa of Wanstead.

If you missed what Margaret told me today, you can catch it again here: –

Hope to see you again next week,
Scott