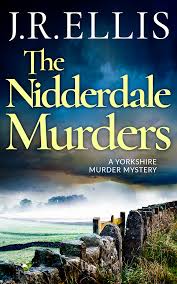 I was joined again today by Margaret Mills for her regular book review – and just like last time Margaret has chosen another murder mystery based in the English countryside, but rather than Kent, the action in this book takes place in Yorkshire.

The book under review is THE NIDDERDALE MURDERS by J R ELLIS which is actually the fifth book in a series.

It’s autumn – grouse shooting season – in the Yorkshire Dales and DCI Jim Oldroyd and his team are called out to a village where an unpopular retired judge and local grouse moor owner, Alexander “Sandy” Fraser has been murdered under mysterious circumstances. Not only has the crime been witnessed by a barmaid observing from a window of the Dog & Gun Inn, but the perpetrator seems to have made no effort to conceal his identity from her. The search is on for local odd-job man / gardener Alan Green, who conveniently has vanished! And once investigations begin the case becomes more complicated and darker than it appeared at the start.

A second murder provides the links.

Some of the reviews I’d read on this book suggested that whilst a competent novel, it might be a bit ponderous and that the ending was too far fetched and unbelievable, but what did Margaret think?

Listen here to find out: –

We also heard that owners of certain models of Tesla cars can now download an app that allows their horns to make a variety of bizarre sounds from bleating goats, to blowing raspberries.

According to Car and Driver, the feature won’t work while the car is on the move, meaning you won’t be able to blow raspberries at people who annoy you while driving but you can do it as much as you like when you’re parked up somewhere.

Tesla also warns that drivers to: “Please check local laws before use in public spaces.”

Imagine getting in trouble with the police over a farting car… that could come as a bit of a blow!

On that note, I’ll see you again tomorrow,
Scott