You may have heard us play Just Killers From Space Again by AI Accident – but who is he? We chatted to him to find out. 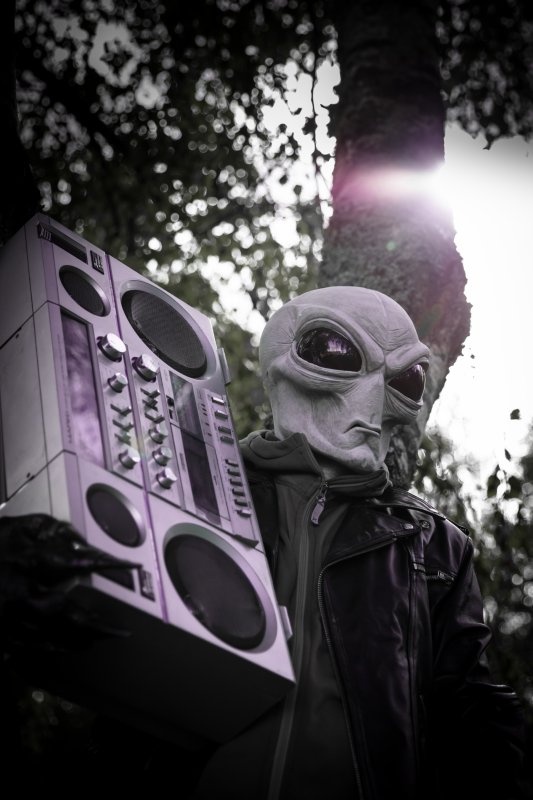 After 20 years guitar playing I coincidentally stumbled over the synthwave genre a year ago, and instantaneously fell in love with it.

I started to produce electronic music, involuntarily with elements included from other genres.

I really enjoy the 80s theme as I am also a born hardware collector so today, my collection includes also retro synths besides my early 1900s retro hifi stuff such as funnel gramophones and 78 rpm vintage records.

You can see more pictures on my website www.pixboproductions.com if you’re curious!

When I was 10 years old my parents moved to new towns twice within two years – so my sister and I had to leave all our friends behind twice.

Presumably in an act of guilty conscience, they bought me a Casio synthesiser with storm and thunder sounds included.

I loved these synthetic effects and I believe these effects were even more used than the low quality normal presets.

With my friend Gustaf Lerne (who is now the light technician in the very successful Swedish synth band Kite) we started a two man band – synth and drums.

Yes, this was as shitty as you can imagine. I believe we played one instrumental song once on a school talent night.

Despite solely parents in the audience, the feedback and applause were very limited compared to the other children´s performances (ha ha ha).

When I was very young I remember my mother playing Elvis Presley vinyl records on full blast volume way too frequently.

AS I got older, the first single I bought as a 10 year old was the newly released Living On A Prayer by Bon Jovi (1986) and the first album I bought was The Final Countdown from Europe (also the very same year).

Shortly after, when developing my “real” music taste, I found the Cure and Depeche Mode, instantly falling in love with the albums “Speak and Spell”, “Music for the Masses” and “Violator”.

In parallel with easily digested electronic pop, I listened to both 60s and 70s music such as the Animals, the Doors and the Velvet Underground. I also found Front 242 and other electronic body music bands.

In the 90s is was mostly Hendrix and grunge and rock such as Nirvana and Rage Against The Machine but also some punk rock like the Ramones, Dead Kennedys and Sex Pistols.

Then followed a softer period with a lot of Americana such as the Jayhawks and singer/songwriter pop with awesome early Elliot Smith and Grant Lee Buffalo.

During the early 2000s, my colleague Johan B. slowly brainwashed me with non-commercial electronica and in parallel, I started to appreciate and enjoy classic hard rock (all the big names), but maybe the early 70s bands in focus and in particular Ten Years After and Savoy Brown.

During the last year, I have 100% listened to synthwave. This answer can be in the full book format as I listen to a lot of music and music genres, but let´s cut it here for now.

3 tunes as AI Accident and 1 as X-Bit Moose. All 4 tunes are accompanied with homebrewed music videos and all are found at my site www.pixboproductions.com.

Starting with the last question here: Yes, very much so! I try to learn and extract value from my favourite music. One example is that all of my favourite tunes contain fat pad synthesizer sounds, an important dimension and unique balancing soft complementing layer to harder synth leads in great electronic music. These subtle pad sounds I easily tend to forget if not being continuously reminded.

Right now, I am playing the following tunes on repeat: Midnight Rain by Finnish artist Turbo Knight, actually both the original version and the newly released vocal version, “Stellar Wind” by Italian artist Zero Call, “The Quiet Earth” by Franch artist Thomas Barrandon, “Shadows” and “Ultraviolet” by Vancouver based FM attack, “Celestial” and “Beyond the horizon” by the new epic excellent Swedish band Nothing but Heart and now most recently “Survival is changes” by Agent Johnny Red and Hypergalactic Overdrive by Mr. Dawso.

It would be cool to initiate a collaboration between with my favourite Swedish singer Amanda Bergman (her fantastic band is called Amason). I would also like to produce a track in collaboration with the artist Ben Gibbard (Death Cab for Cutie) and if I would get the same opportunity as guitarist, I would love to tour with the psychedelic stoner rock band All TheM Witches (they sound like a hybrid of blues rock and the Doors, simply fantastic).

Quickly produce a lot of music both as AI Accident and most likely also in other artist or project names as I feel my personal original music jukebox was just plugged in and turned on and that I have way too many songs within me that just want out, like carbon dioxide in a bottle of champagne 🙂