Ideas to consider whilst in “SHUT DOWN”


Last week I told you about the unforeseen consequences resulting from shopping restrictions imposed by the Malaysian Government which meant that only men were being allowed into supermarkets thereby causing total confusion as unsupervised males battled with the shopping lists prepared by their other halves. 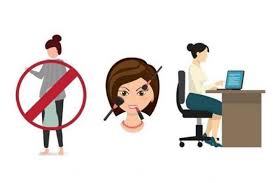 And now from the same country comes news of a storm of protest resulting from a series of “on line” posters instructing women how to keep their menfolk happy during the lockdown.

Suggestions from that country’s governmental department for women issued illustrated tips to show the womenfolk giggling coyly, being told to be more loving, instead of nagging – especially if the menfolk returned home with the wrong shopping – and not allowing appearances to slip and making sure that homes are kept clean.

One suggestion was that women should avoid being sarcastic if their partner was not helping with the housework.

No argument there from me!

But the resultant storm of protest from Women’s groups, claimed that the suggestions implied that women are ultimately responsible for getting domestic chores done, when in their view that duty should be a shared one.

The Women’s Centre for Change said,”It makes women the ones who need to persuade their partners to chip in, and worse, asks that women downplay a rightful request by using infantile language and mannerisms – so as not to offend the apparent sensitivities of men. The implicit message is that men are allowed to slack off on domestic work and it’s women who must follow up with them – but they should only do so nicely. In short, it sends the message that women are subordinate in the home and are not allowed to function as equals to men.”

Oh dear – back to the drawing board then!

In the second hour I was joined by Margaret Mills for her monthly book review.

The subject this month was as psychological thriller – THE FAMILY UPSTAIRS by LISA JEWELL.

The background to the tale revolves around a young lady, Libby Jones, who on her 25th birthday learns not only the identity of her birth parents, but also that she is the sole inheritor of their abandoned mansion on the banks of the Thames in London’s fashionable Chelsea neighbourhood, worth millions.

A quarter of a century earlier police had been called to 16 Cheyne Walk with reports of a baby crying. When they arrived, they found a healthy ten-month-old happily cooing in her crib in the bedroom. Downstairs in the kitchen lay three dead bodies, all dressed in black, next to a hastily scrawled note. And the four other children reported to live at Cheyne Walk were gone!

Now the truth of what happened all those years ago is about to be revealed.

With the help of a reporter, Libby discovers that she might not want to know where she came from after all………………!!

So is this a book you might want to consider now that we are all confined to home?

With all the mainstream bookshops currently closed you can still obtain a copy on line.

For example the paperback version is available from Amazon at £4.50 with the Kindle edition at £4:99.