Now this is what I call a festival!


On today’s show we reported on one of the truly daft festivals held around the world, but surely this must be one of the most insane.

This is the annual exploding hammer festival which takes place during February in the Mexican town of San Juan de la Vega, and is dedicated to St John the Baptist. 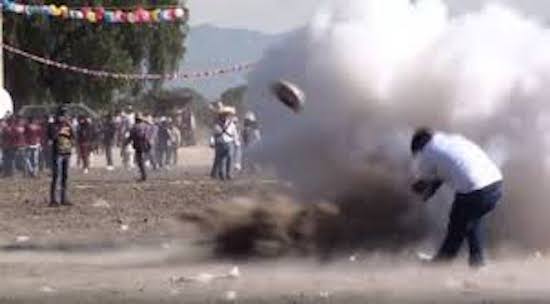 According to legend, the town’s name sake San Juan de la Vega was the victim of a theft from bandits who took his gold, but St John the Baptist helped to get it back becoming a kind of Mexican ROBIN HOOD.

The glittering event involves participants attaching a mix of sulphur and chlorate to the ends of sledge hammers which are then smashed against rail beams.

This makes the substance explode and sends up massive clouds of smoke, and unsurprisingly many of those taking part are flung backwards with some force.

This year’s event was no different and resulted in 43 injuries, with one man having to be stretchered off.

In the second hour today I was joined once more by Margaret Mills who was looking back to the Purleigh Colony established by some Russia émigrés just outside Maldon.

The colony only existed for a short time – between about 1896 and the end of 1900 – but listen here to what Margaret had to say about this group: –