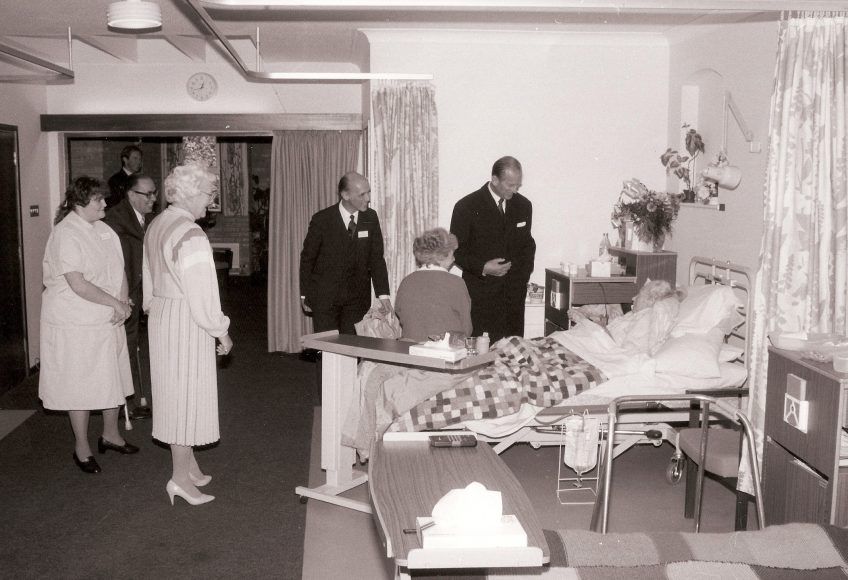 The Duke of Edinburgh visits Saint Francis Hospice in 1985

2019 marked Saint Francis Hospice’s 35th birthday, and they’ve been on quite a journey.

In 1984, everything had to be ‘big’: shoulder pads, hair, TV programmes, personalities, and supergroups. Tina Turner’s hair was defying gravity, Dallas was winning the ratings war, the Iron Lady was revelling in a landslide victory, and the pop stars of Band Aid were gathering to feed the Ethiopian famine.

And of course, there was a big dream: to open a hospice on a hill in Havering-atte-Bower. A dream that soon became a reality, and is still standing strong four decades later.

Going against the mid-80s grain, initial funding for Saint Francis Hospice was anything but ‘big’. Dr Dorothy Rule, Peter Smith and Joan Matthews got together in a small flat in Hornchurch to discuss how on earth they could get this hospice idea off the ground.

As they were putting their coats on to leave, Peter exclaimed, “Maybe we should start fundraising tonight!” Each of them dipped into their pockets and put a five pound note on the table. And so it began. While fairly insignificant in amount, it was a grand gesture: the first funds to ever be collected for Saint Francis Hospice.

The Hospice opened with 10 beds, soon reaching 12, 16, and then 22 in 2013. In the beginning, everybody had to do everything — from fundraising, to cleaning, to nursing, to supporting bereaved families. Even now, Saint Francis Hospice’s 250 members of staff help out across the Hospice, which is very much part of the Hospice’s ethos.

The Hospice’s very first Matron, Sue Waite, arrived with a pregnant cat who gave birth to kittens in a cupboard — now the HR office. The cat could often be seen curled up, keeping a bed warm for a patient. The Hospice is steeped in feline history, and the staff always aspire to bring cats back to our gardens, set in the beautiful surroundings of this quaint English village.

Saint Francis Hospice’s first Medical Directors in 1984 were Anthony Smith and Peter Kershaw. They used to volunteer 24 hours a day, seven days a week, and 52 weeks a year — yet still didn’t think anything of it.

CEO Pam Court explained that there weren’t so many rules and regulations in those days:

“You could pretty much do what you wanted — and I suspect that you did!”

With 18 retails stores, an eBay shop, 850 volunteers, and planning permission to expand the Hospice’s imposing 19th-century mansion to be in place by our 36th birthday, Saint Francis Hospice isn’t not stopping.

Hospice Care Week between 7th–13th October is an annual celebration to raise the profile of hospice care across the UK. This year’s theme is This Is What It Takes.