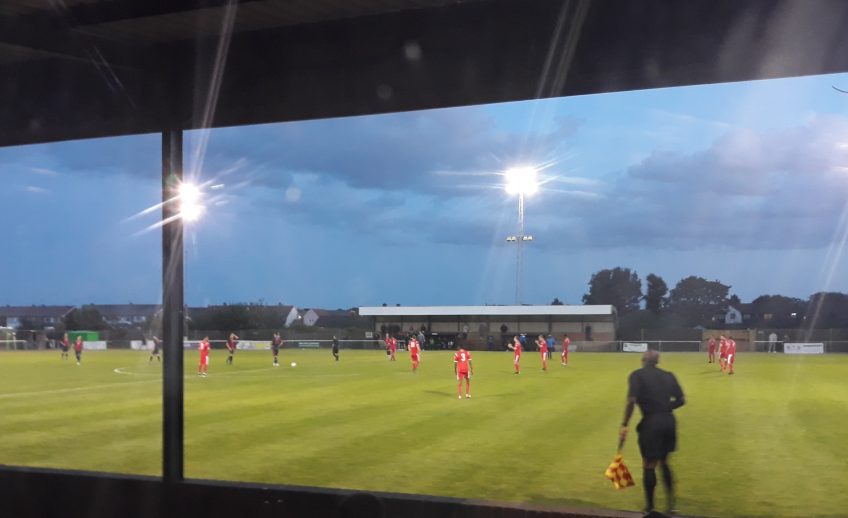 White Ensign’s inaugural FA Cup adventure is at an end, as they were reminded of what a cruel game football can be at times.

They were hopeful of adding a second step five scalp in their first ever appearance in the competition, having defeated Woodford Town of the Essex Senior League in an Extra Preliminary Round replay.

After drawing 3-3 away to Takeley – who currently top that league – Brett Munyard’s Eastern Counties League Division One South side, who were the lowest ranked Essex club left in the competition came within seconds of another upset in this replay.

But a controversial last gasp leveller took the tie into extra-time, during which the visitors scored a winner to take them into the First Qualifying Round where they will face Isthmian Premier League side Potters Bar Town.

Coby Miles had the first decent chance of the match for Takeley in the 9th minute, but it was well dealt with by Ensign goalkeeper James Parkins who gathered the ball safely.

Then a couple of minutes later Ensign’s David Limber had a strong long-range effort which only just went wide to the left of Takeley keeper Matt Gill.

Miles continued to create problems for Ensign with his pace and he had a decent effort that went just over the bar in the 26th minute.

Then Parkins made a superb save from the resulting corner as Marc Das’s men enjoyed a spell of pressure on the hosts.

With five minutes to go until half-time Takeley’s Glen O’Hanlon let fly with a superb left-footed curling shot that looked as though it was heading for the top corner.

But Parkins made a brilliant mid-air save and pushed the ball round the post.

And the Ensign custodian was on hand to keep his side the in tie in the 44th minute, when he alertly stopped another goalbound Miles effort. 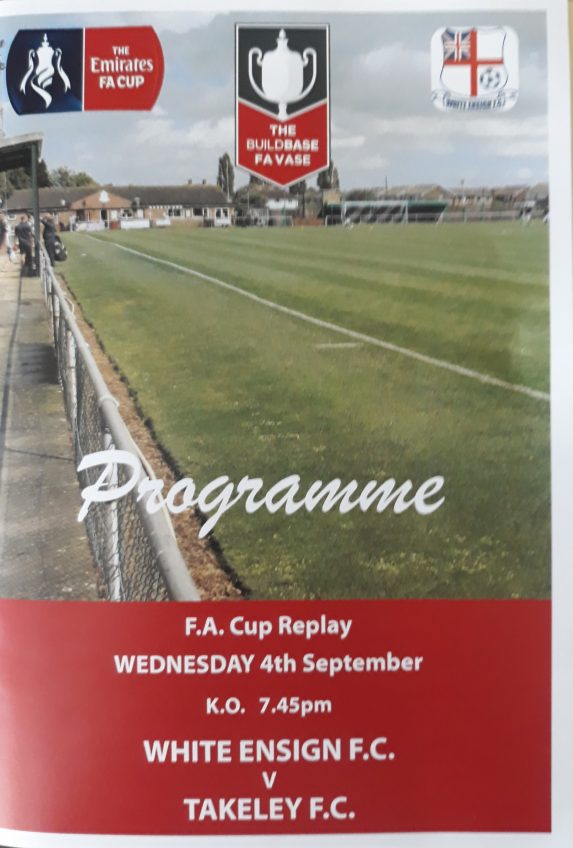 Takeley’s Bryn Thorpe had the first chance of the second half just seconds after the restart, and Parkins once again had to be alert to catch his shot.

But it was the home side who snatched the lead in the 55th minute.

In a move which started with a cross from the left from Locke, Limber cleverly back-flicked the ball to Conner Barnby who fired home a right-footed strike.

But only three minutes later some slack defending from Ensign – who had shut the visitors out well until that point – resulted in Thorpe scrapping the ball home to bring the scores level.

In the 77th minute a superb right-footed screamer from Luke Skinner fired Brett Munyard’s men back into the lead.

And with seven minutes remaining it wasn’t far from becoming 3-1, as Ensign defender Eliot Vile went forward and let fly with a left-footed strike, which went just wide of Gill’s goal.

Takeley won a corner once the game had entered extra-time, after a foul by Ensign substitute John Hilliard for which he received a yellow card.

The visitors piled everybody forward including goalkeeper Gill, who wasn’t far from heading the ball past his opposite number.

But just as Ensign should have been about to celebrate victory, they failed to clear the ball properly and in the fourth minute of time added on substitute Lewis Deamer fired the ball past Parkins and into the net, to make it 2-2.

Referee Andrew Simmonds allowed the equaliser to stand, even though many observers felt that there had been a handball at the back post just beforehand.

Then seconds later he blew his whistle and the game entered extra-time.

Deamer netted again two minutes into the additional half-hour, tapping the ball home after Parkins had initially pushed it away.

A few minutes later Andy George came agonisingly close to equalising for the home team, but Gill made an outstanding stop to keep the Essex Senior League table-toppers in the lead.

Late in the first period of extra-time there was a big shout for a penalty when Takeley’s Miles was thought by many to have handballed in the box, but referee Simmonds disagreed and waved play on.

Ensign continued to try and mount attacks but it proved to be in vain, and so Takeley go into the hat for the first qualifying round.

To summarise White Ensign had good spells of possession, passing and movement during what was a very entertaining replay and they can count themselves very unlucky not to have gone through having given a very good account of themselves against a side from a higher level.

But they had also faced spells of pressure from a Takeley side who were able to counter-attack very effectively on occasions, and who looked particularly dangerous at set-pieces.