Written by Paul Golder in In The Papers👁 675 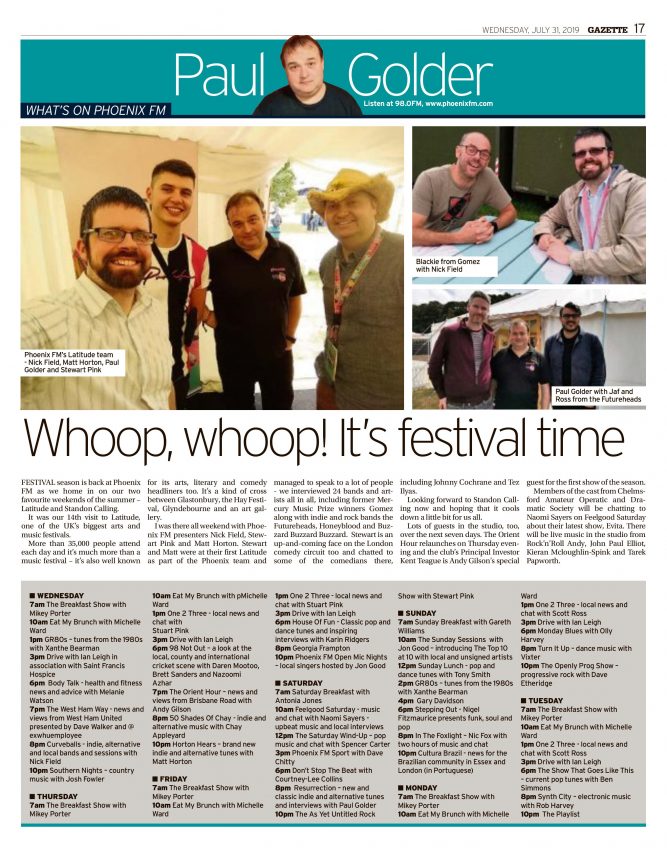 Festival season is back at Phoenix FM as we home in on our two favourite weekends of the summer – Latitude and Standon Calling.

Last weekend was our 14th visit to Latitude, one of the UK’s biggest arts and music festivals. Over 35,000 people attend each day and it’s much more than a music festival – it’s also well known for its arts, literary and comedy headliners too. It’s a kind of a cross between Glastonbury, the Hay Festival, Glyndebourne and an art gallery.

I was there all weekend with Phoenix FM presenters Nick Field, Stewart Pink and Matt Horton. Stewart and Matt were at their first Latitude as part of the Phoenix team and managed to speak to a lot of people – we interviewed 24 bands and artists all in all, including former Mercury Music Prize winners Gomez along with indie and rock bands the Futureheads, Honeyblood and Buzzard Buzzard Buzzard. Stewart is an up and coming face on the London comedy circuit too and chatted to some of the comedians there, including Johnny Cochrane and Tez Ilyas.

Looking forward to Standon Calling now and hoping that it cools down a little bit for us all!

* Lots of guests coming up in the studio too over the next seven days. The Orient Hour relaunches on Thursday evening and the club’s Principal Investor Kent Teague is Andy Gilson’s special guest for the first show of the season.

* Some members of the cast from Chelmsford Amateur Operatic and Dramatic Society will be chatting to Naomi Sayers on Feelgood Saturday about their latest show, Evita.

* There will also be live music in the studio from Rock’n’Roll Andy, John Paul Elliot, Kieran Mcloughlin-Spink and Tarek Papworth.