No shortage of guests to talk about our wonderful sporting summer

Written by Paul Golder in In The Papers👁 520 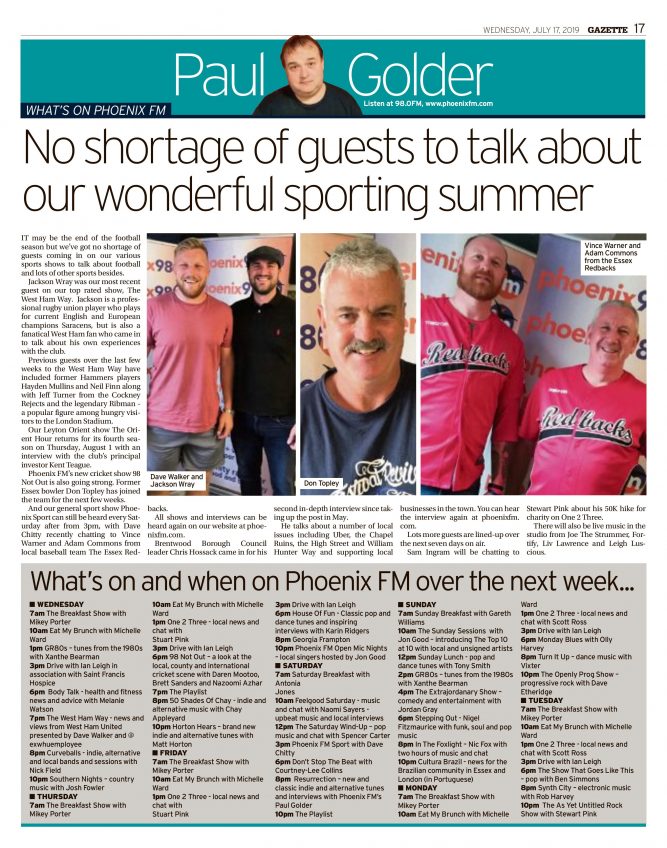 It may be the end of the football season but we’ve got no shortage of guests coming in on our various sports shows to talk about football and lots of other sports besides.

Jackson Wray was our most recent guest on our top rated show, The West Ham Way. Jackson is a professional rugby union player who plays for current English and European champions Saracens, but is also a fanatical West Ham fan who came in to talk about his own experiences with the club.

Previous guests over the last few weeks to the West Ham Way have included former Hammers players Hayden Mullins and Neil Finn along with Jeff Turner from the Cockney Rejects and the legendary Ribman – a popular figure among hungry visitors to the London Stadium!

Our Leyton Orient show The Orient Hour returns for its fourth season on Thursday 1st August with an interview with the club’s principal investor Kent Teague.

Phoenix FM’s new cricket show 98 Not Out is also going strong – former Essex bowler Don Topley has joined the team for the next few weeks.

And our general sport show Phoenix Sport can still be heard every Saturday after from 3pm, with Dave Chitty recently chatting to Vince Warner and Adam Commons from local baseball team The Essex Redbacks.

All shows and interviews can be heard again on our website at phoenixfm.com.

Brentwood Borough Council leader Chris Hossack came in for his second in-depth interview since taking up the post in May.

He talks about a number of local issues including Uber, the Chapel Ruins, the High Street and William Hunter Way and supporting local businesses in the town. You can hear the interview again at phoenixfm.com.

Lots more guests lined up over the next seven days on air.

Sam Ingram will be chatting to Stewart Pink about his 50K hike for charity on One 2 Three.

There will also be live music in the studio from Joe The Strummer, Fortify, Liv Lawrence and Leigh Luscious.