Tune In For Some Country Classics

Written by Paul Golder in In The Papers👁 501 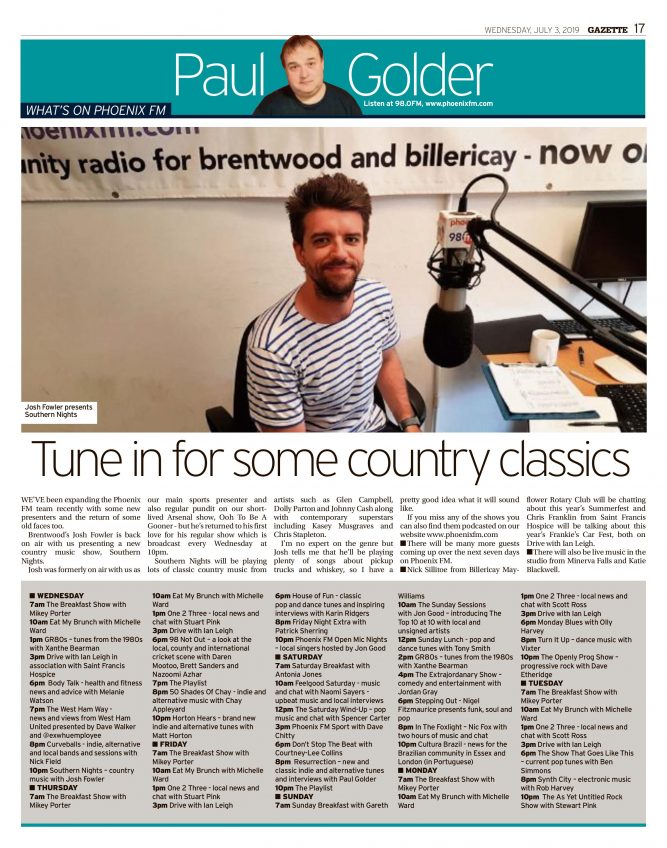 We’ve been expanding the Phoenix FM team recently with some new presenters and the return of some old faces too.

Brentwood’s Josh Fowler is back on air with us presenting a new country music show, Southern Nights.

Josh was formerly on air with us as our main sports presenter and also regular pundit on our short-lived Arsenal show, Ooh To Be A Gooner – but he’s returned to his first love for his regular show which is broadcast every Wednesday at 10pm.

Southern Nights will be playing lots of classic country music from artists such as Glen Campbell, Dolly Parton and Johnny Cash along with contemporary superstars including Kasey Musgraves and Chris Stapleton.

I’m no expert on the genre but Josh tells me that he’ll be playing plenty of songs about pickup trucks and whiskey, so I have a pretty good idea what it will sound like!

If you miss any of the shows you can also find them podcasted on our website – phoenixfm.com.

** There will be many more guests coming up over the next seven days on Phoenix FM.

** There will also be live music in the studio from Minerva Falls and Katie Blackwell.