The One Hit Wonder World Cup – KICK OFF!

Written by Stewart Pink in Drive👁 726 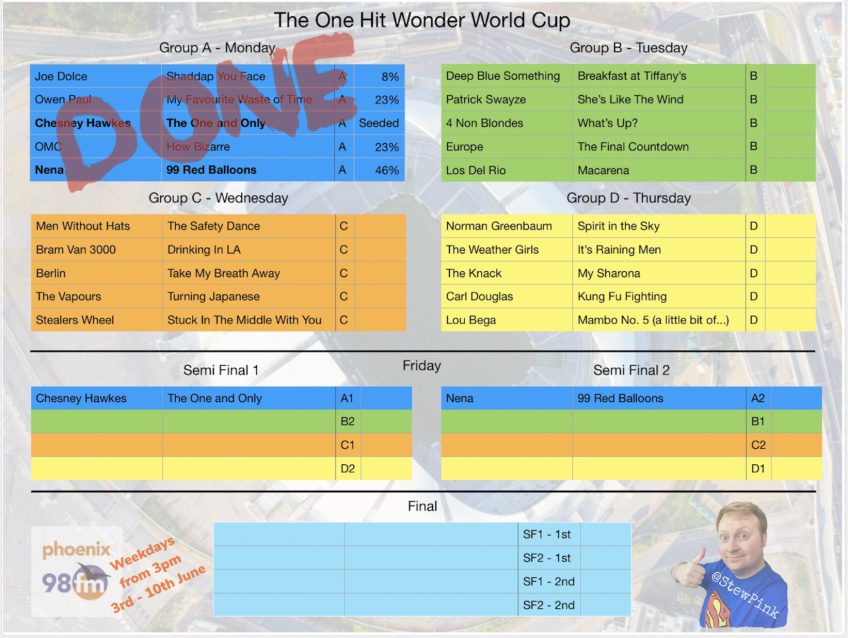 With Mr Leigh on his holidays, today was the first of my stint as Phoenix FM’s Drivetime substitute. There was all the usual fun and frolics and I channeled my inner Ian to bring you home with a sing on your lips with an awesome playlist!

We also kicked off the hotly anticipated One Hit Wonder World Cup with the first round done and dusted. Scott Ross exercised his power by putting through Chesney Hawkes’ “The One and Only” as Group A’s presenter pick. Then, it was up to you to cast your votes on Twitter and Facebook to choose a winner from the rest of Group A.

Nena’s “99 Red Balloons” secured a place in the semifinals with a whopping 46% of the vote followed by a joint runner up of Owen Paul’s “My Favourite Waste of Time” and OMC’s “How Bizarre” each scoring 23% of the Twitter vote. Meanwhile Ultravox fans will be relieved to hear that Joe Dolce’s “Shaddap You Face” only scored 8%.

Tomorrow, the fun continues with more of the same from 3pm and we’ll be sending two more one hit wonders through to the dizzy heights of semifinal fame! You’ll be able to vote on Twitter @StewPink or @PhoenixFM and via the Phoenix FM Facebook page.

If you missed it, I’ll be putting together a mix of the best bits from my Drivetime cover on my regular podcast. Just search “Stewart Pink” whenever you get your podcasts from and if you’re a fan of my shows then be sure to tune in for my regular hangouts – I present The As Yet Untitled Rock Show every Tuesday from 10pm and The One2Three Show every Friday from 1pm.

Panic! At The Disco – High Hopes

Chesney Hawkes – The One And Only

Feeling – Love It When You Call

Fleetwood Mac – Go Your Own Way

Taylor Swift ft. Brendon Urie Of Panic! At The Disco – ME!

Del Amitri – Roll To Me

Clash – Should I Stay Or Should I Go

Kelly Clarkson – My Life Would Suck Without You

Dr Zero and the Hot Heads- -Suzi On The Wall

Ocean Flaws – Pray To The Satellite

Caesars – Jerk It Out

Tears For Fears – Sowing The Seeds Of love