A tale of a real “dog and bone”


Now last week we reported on the new TV channel launched just for dogs but now comes news that scientists have created a prototype DogPhone device which allows dogs to videocall their owner by shaking a hi-tech ball.

It is hoped that this will help address the separation anxiety suffered by some pets.

To get things working the dog simply has to shake a ball containing an accelerometer which, once it detects motion, connects to a computer and videocalls the owner on a screen connected to the device. 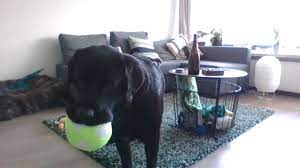 The new invention is the brainchild of University of Glasgow’s Dr Ilyena Hirskyj-Douglas, her 10-year-old labrador, Zack, and colleagues from Aalto University in Finland.

The good doctor says, “There are hundreds of internet-connected ‘smart toys’ on the market that dog owners can buy for their pets, however, the vast majority of them are built with the needs of dog owners in mind, allowing them to observe or interact with their pets while away from home but for the first time here is a device which aims to provide what dogs themselves might want”

She continued, “What I wanted to do with DogPhone was find a way to turn Zack from a ‘usee’ of technology, where he has no choice or control over how he interacts with devices, into a ‘user’, where he could make active decisions about when, where, and how he placed a call.”

After several demonstrations of how the ball could be used to start a video call, Zack was given the toy to play with for 16 days spread over a period of three months.

While Zack made some “accidental” calls when he slept on the ball, researchers said several of the calls involved the dog showing his owner his toys and approaching the screen, suggesting he wanted to interact with her.

Dr Hirskyj-Douglas responded using her phone to show Zack her environment, including her office, a restaurant and a street busker, during which the dog pricked up his ears and approached the screen.

It is hoped that the device could help “pandemic puppies” – dogs acquired during Covid lockdowns – to find new ways to deal with the stress of being home alone as their owners return to work.

In the second hour of today’s programme I was joined by Margaret Mills who turned the clock back to the early 1900’s to look at an early Essex car manufacturer – Bentalls of Heybridge.

Listen here to what Margaret had to say on this subject: –