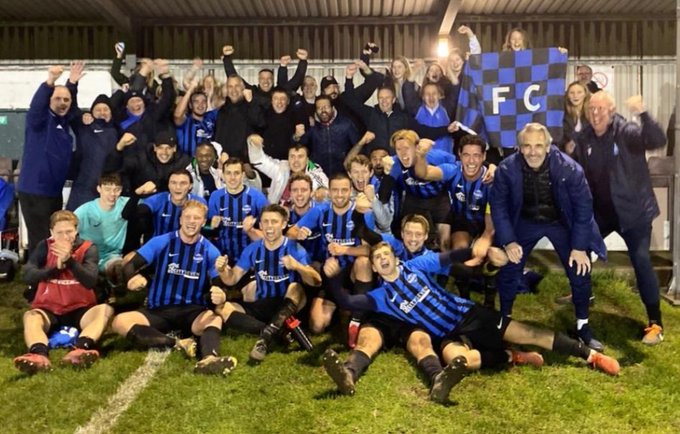 Buckhurst Hill’s FA Vase campaign continues after coming through a classic on Saturday that saw them put themselves into a 2-0 lead after Sonny Shilling’s 32nd minute opener was added to by a Suleyman Zuhdu goal in the 63rd minute. But the hosts pulled one back via Ross Gilfedder, then looked to have got themselves back in it when Robbie Sweeney levelled up in stoppage time. But with penalties looming the Stags then went up the other end and scored again as Shilling delivered a sublime freekick that beat Jake Jessup’s desperate dive and crashed into the top corner of the net. It was a compelling Vase tie, which had plenty of late drama for those in attendance, with the travelling Buckhurst Hill support certainly having something to celebrate after almost seeing their side throw away their two goal advantage.

Suleyman Zuhdu almost scored in the 3rd minute when he controlled the ball on his chest, then turned and volleyed a shot that left Jessup as a mere spectator as the ball whistled past him before smashing against the crossbar. Soon afterwards Zuhdu nearly got on the end of a decent Sam Sollosi delivery as the Stags made their usual first start.

Gorleston, leaders of the Thurlow Nunn Premier Division, are themselves no slouches and they created their first chance themselves in the 10th minute. A cross towards the near post was almost headed home by Connor Ingram. Then Daniel Blockley was called upon to punch clear a Sweeney freekick. Already it was looking like this was going to be a competitive game, but the chances did dry up as both teams after that opening start started to become a bit more cagey.

The Stags won themselves a corner in the 32nd minute and from it Sonny Shilling was able to poke the ball past Jessup to open the scoring. A minute later and Shilling had another shot, but this time Jessup was able to save it, and the hosts were now having to dig in as Buckhurst Hill raised their game and started to pepper the Gorleston box.

It was not all one-way traffic however. A timely tackle by Alfie Harris dispossessed Gilfedder, who would have had a clean run towards goal had the ball not been removed from his feet. A couple of corners required good goalkeeping work from Blockley, with the Greens having their best chance of the game in the 42nd minute when Gilfedder volleyed a shot narrowly wide. In stoppage time Buckhurst Hill went even closer with Sollosi having a fierce shot tipped over by Jessup. The ref then brought the first half to a close, and at that stage it was still very much anyone’s game.

The hosts wasted no time in getting into Buckhurst Hill’s defence after the break; as early as the first minute of the half a decent cross had to be cut out by Henry Day, and Blockley had to come and claim a corner, before then punching clear a free kick, as the Greens came out with some purpose.

But Jessup was then called upon in the 54th minute to punch clear a Zuhdu freekick. A minute later the hosts had got up the other end with Sweeney placing a cross from the byline into the six-yard box that Blockley did well to smoother. You simply couldn’t take your eyes off the pitch as the game served up plenty of action. Zuhdu flashed one wide, moments later Gorleston got a ball into the Stags’ box and there was to be a heart-in mouth moment as Sweeney went down from a challenge, drawing loud appeals from Gorleston player and fan alike, but the referee waved play on. Buckhurst Hill defended in numbers, cleared their lines and then launched a counter-attack that ended with Tyler Dolan having a shot deflected for a corner.

Gorleston were certainly pressing, and went close when Samuel Knock had a header which was well saved by Blockley. However as the Greens continued their pressing, it meant that gaps were starting to appear at the back and the Stags exploited that to the maximum in the 63rd minute when Zuhdu was played in, and with both time and space he was able to pick his spot as he fired the ball past the Gorleston keeper.

With the lead now extended, the game then turned on its head in the 67th minute after Jonah Gregory was sent off for a challenge that the referee felt was too over-zealous. That spurned the hosts on, and they won two corners in quick succession, the second of which they claimed had been carried over the goal line by Blockley.

The final fifteen minutes were frantic as the hosts threw everything at Buckhurst Hill, meaning that Blockley and his defence had plenty of work to do, with the Stags stopper pulling off a couple of good saves. However in the 83rd minute a ball swept across the box into the path of Gilfedder, who pulled the trigger and riffled the ball into the net. All of a sudden Gorleston were now in a position to salvage something from the game. However Zuhdu nearly found an instant reply, having a long range shot that was only an inch too high.

Connor Deeks almost found an equaliser in the 87th minute, with a shot that had it gone in would have certainly been a goal of the season contender; unleashed from 35 yard out it looked like it was making it way into the net, however Blockley pulled off a superb save, a real save of the season contender, to keep the ball out. The Buckhurst Hill fans could breath again after that moment of worry.

But then in stoppage time it looked like Buckhurst Hill were going to have their day spoiled as a through ball reached Sweeney and he drilled home the equaliser. Penalties were now looming but two minutes later the pendulum once again swung Buckhurst Hill’s way when they were awarded a free kick 30 yards out and up stepped Shilling to crash home a heat seeking missile of a shot that bent past Jessup and crashed into the top corner of the net, sparking absolute pandemonium amongst the Buckhurst Hill supporters. There were two further Gorleston corners to defend before any talk of the next round could take place, and seeing as this game had been so action-packed meant that those two corners were as nerve-wrecking as you could possible want. But finally Blockley made a claim to the ball, cleared his lines and then the referee brought the curtain down on this classic Vase tie, sparking further celebrations from the Buckhurst Hill contingent. And deservedly so, because what a Vase campaign the Stags are having.  They entered the competition for the first time ever this season – they now find themselves in Monday’s 3rd Round draw.