Fit and flourishing, I’m back at last!


Travellers have been left puzzled and irritated after their luggage was replaced with crates of frozen fish on a conveyor at Heathrow airport.

Returning from her holiday in Cyprus, Becca Braunholtz along with her husband and two children were among passengers at Terminal 5 last Monday surprised when their luggage seemed to have been replaced by around 100 boxes of bass and sea bream. 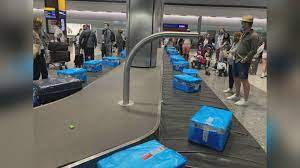 She said: “We thought our luggage would appear  in the second wave of deliveries but instead it was yet more boxes of fish.

But she said that the waiting plane passengers grew increasingly irate as ‘at least 100’ boxes of bass and sea bream arrived at Terminal 5 of the busy airport on Monday, November 1.

What no one can fathom is why those loading the boxes of frozen fish onto a carousel for passenger arrivals didn’t realise that something might be wrong, especially since the boxes were all clearly labelled for despatch to JFK airport.

Sounds fishy to me whilst a BA spokesperson said they were perplexed but eventually managed to re-unite passengers with their luggage.

Believe it or nor, but a new TV channel just for dogs launched last Monday and is available on a range of Smart TV’s as well as Android and Apple devices is. 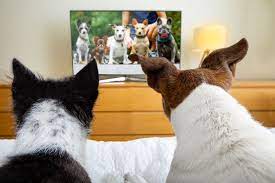 Yes truly DOG TV has been designed specifically to cater for dogs with programming aimed to alleviate symptoms of conditions such as separation anxiety, loneliness and stress. This the channel says is especially important now that many owners have returned to work leaving their animals alone at home.

So programmes have been developed to cater for the physiological and psychological needs, moods and responses and to help them feel more stimulated or relaxed.

Colours, audio frequencies and camera alignment have all been adapted to cater to dog senses.

But there will also be programmes to help owners better understand and look after their pets and will include shows by celebrity dog trainer Laura Nativo, who will provide tips on how to live better at home with a pet, as well as programmes that provide simple recipes for dogs.

Presumably that’s recipes for foods to be eaten by dogs and not recipes for cooking your pet!

A channel spokesperson said, “One out of six dogs suffers from overt separation anxiety.

Symptoms that appear when owners are away can range from excessive barking and refusing to eat, to trying to escape and destructive behaviour. DogTV helps canines to feel relaxed and comforted until their owners return home.”

Maybe there’ll soon be a radio station for dogs. Perhaps that could be set up in Barking.

On that perhaps it’s best to exit stage left, so I hope to have the pleasure of your company again next week,
Scott