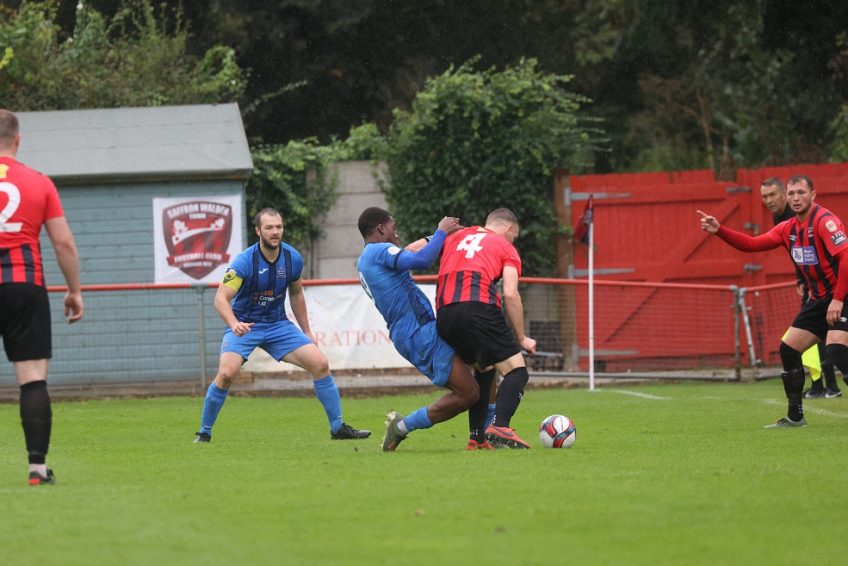 It didn’t just rain all day on Saturday, it also rained goals! Eleven in the White Ensign v Cockfosters encounter which saw Luke Woodward score a hat-trick for White Ensign with the other Ensign goals being notched by Joe Gregory, Dominic Locke, Zack Littlejohn, Brandon Martin plus an own goal. Cockfosters themselves scored three times, with George Beattie claiming two of those, the other coming via Joseph Entwhistle. White Ensign had shown even greater firepower in this one, winning by an incredible score lin of 8-3. The other seven ESL games saw a total of 29 goals being registered, with Athletic Newham’s 6-0 away win at Sawbridgeworth Town the biggest winning margin of the day. Richard Kone opened the scoring on 15 minutes, then made it 2-0 on 35 minutes. Joel Appiah was the next to hit the target, followed by Kone who completed his hat-trick just before the hour mark. Two further goals were added in the final minutes of the game as Jacques Leurs and Josh Owootomo added further shine to the victory, with Wilkonson Boateng earning himself a clean sheet at the other end. Athletic Newham end the day up in 5th, while Sawbridgeworth Town remain bottom. James Bransgrove also kept a clean sheet for Enfield, while at the other end Luke Wilson, Benji Crilley, Alex Warman, Olly Miles and Ryan Ramsey were all hitting the target in the E’s 5-0 win over Hoddesdon Town. Dan Russell was the other keeper keeping the ball out of his net, while at the other end Cameron Gray scored the only goal that saw West Essex take all the points on offer at FC Clacton. Luke Mayhew breached Walthamstow defences in the 11th minute, but Stow were level three minutes later via Moses Carvalho, but Stow went on to score three times in the second half, with Adalberto Pinto (51) and Charlie Cole (62) putting their side in the driving seat. Ed Nobbs pulled one back on 67 minutes, but a returning to Walthamstow Callum Ibe, already a fan favourite, sealed the deal when he popped up to score deciding goal six minutes from time. Walthamstow are 4th in the table, Redbridge meanwhile are 3rd after a 3-1 win over Saffron Walden Town. Tim Ogurinde, Nathan Okoye and Joe Elliott supplied the Redbridge goals, with Saffron Walden’s goal being scored by Craig Calver. Ilford beat Southend Manor 2-1, with Dion Kirwan-Lewis and Jordan Fisher scoring for the Foxes, while Alex Jenkins scored the Manor reply. Clapton held leaders Stanway Rovers to a 2-2 draw. Simon Omope and Jordan Owusu-Nepaul bagged the Clapton goals, while Stanway’s goals came from one source: Ernest Okoh. Stanway lead the table on 29 points, but the chasing pack all have games in hand over them.