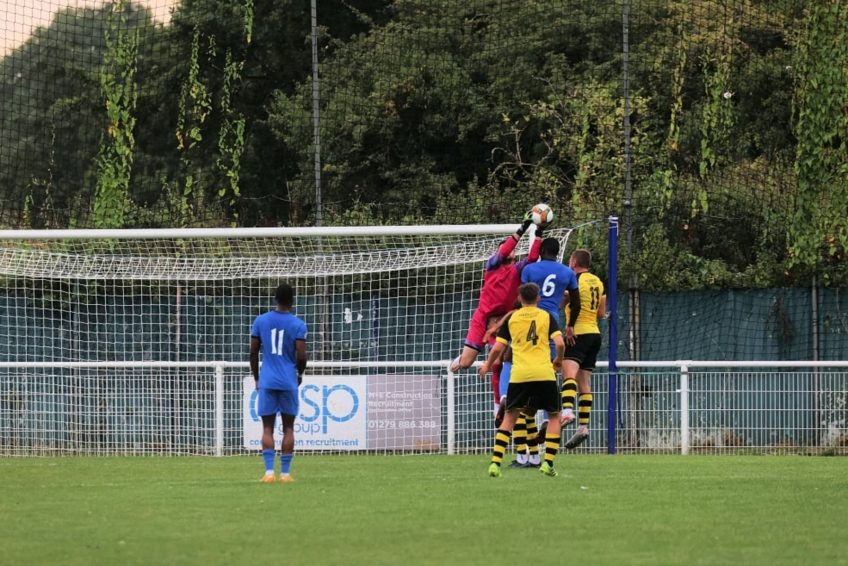 Takeley opened the Vase weekend with a Friday evening visit to New Salamis; and the ESL side found themselves a goal down inside the first minute as Harrison Georghiou handed his side an early lead. Freddie Burrell levelled up on 15 minutes, but the hosts then re-took the lead on 70 minutes when George Lataalia fired home, and Denis Mehmet then made it 3-1 on 78 minutes. George Powell pulled one back in the 88th minute, but too late for Takeley to get themselves back in it and so out they sadly go. There are two former Vase winners in the ESL ranks – Hoddesdon Town and Stansted – and both came through their all-ESL ties. Hoddesdon Town entertained Woodford Town, who they had lost too in midweek. This time around it was the Lilywhites who prevailed as goals from Jack Gibbs, Jack Lee and a Narcis Filip brace saw them beat Woodford Town 4-3. The Woods had taken the lead via Lewis Duberry in the 7th minute, Bailey Brown pulled it back to 3-2 on the hour and Peter Angelov then pulled it back to 4-3 ten minutes from time. The Lilywhites held on though and now look forward to Monday’s 1st Round draw. Stansted are also in the draw after they needed the penalty route before overcoming West Essex. In fact the Airportmen were facing elimination when they went back in at half-time as their opponents had by then scored twice without reply: Mojo Ajibade and Samraj Gill both notching inside 15 first half minutes. But Connor Hammond notched twice to pull the tie level; then Stansted went on to win the penalty shoot-out 3-2. And it was a similar story over at Athletic Newham who at one point were trailing 2-0 to Bexhill United. However Chris Nguidjoli and Jaques Leurs popped up to level it all up late in the game, then Athletic Newham went on to win the game 7-6 on penalties. Ilford found Langford in an argumentative mood – the hosts had four players sin-binned during the course of the game – but more importantly found that Rachid Qist in a goal-scoring mood. He went on to score a hat-trick, adding to the goal that Michael Ogboin supplied in the 10th minute. Redbridge also move on in some style after a 3-0 win over Hadleigh United. Abdishakur Farah, Robbie Norris and Ibrahim Kehinde scored the goals that see the Motormen into the next round. Saffron Walden Town also scored three without reply against Southend Manor. Scott Piggott scored twice, with Craig Calver the other Saffron scorer, while another ESL tie saw Cockfosters move on at the expense of Sawbridgeworth Town. Fosters raced into a 3-0 lead inside twenty minutes as George Beattie, Charncey Dash and Joseph Entwhistle all found the net. Jack Walker pulled one back for the Robins via a penalty in the 76th minute but Cockfosters were not about to let their early fire power go to waste, and they went on to win the game 3-1. Joe Gregory scored the White Ensign goal in their 2-1 home defeat at the hands of Ipswich Wanderers who scored via Teon Leggett and Kris Rose. Stanway Rovers also exit the Vase on the wrong end of a 2-1 scoreline, as Karl Swanborough and Josh Perry got themselves on the Wivenhoe Town score sheet, as did James Crissell who notched the Stanway consolation.

There was one league game played over the weekend, and it was a point each as Little Oakley and St Margaretsbury played out a 1-1 draw. Casey Nolan-Samuels had given St Margaretsbury a 1-0 lead at half-time, but Greg Rodger levelled up in the second half.