Have you heard the one about the priest and the satanist?


Only a week away but it seems like an age!

Nevertheless on today’s music packed edition of the show we took time out to look at a love story involving a Roman Catholic priest and a Satanist. 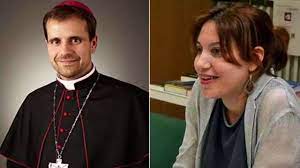 Clearly not what you might call a match made in Heaven!

One of her recently published works is “The Hell of Gabriel’s Lust and the Amnesia trilogy”, which includes chapters relating to ‘sadism, madness, lust and a struggle between good and evil, God and Satan’.

Allegedly it was the priest’s interest in demonology that apparently led him to meet, and ultimately form a close relationship with the lady who was known to be an expert in satanism.

His sudden departure from the priesthood has gone down like a proverbial lead balloon with his colleagues who only learnt of his departure from reports in the press.

“He should have at least met and informed his bishop prior to his departure, about which we remain officially unaware,” said one of the church elders.

Sadly for my first day back I was somewhat confused as I was under the mistaken belief that I was to be joined today by Margaret Mills for her regular book review.

But I was to be both surprised and disappointed to discover that Margaret was not in fact due in until 27th September!

Clearly I’m now well past my “sell by” date and should be put down at the earliest possible date.

But wait hold off for just a while otherwise I’ll miss tomorrow’s show.

See you then,
Scott