Careful you don’t get caught speeding!


Speed cameras are becoming a bane of our lives, but how accurate are they?

Are they even turned on and is there any leeway?

Well most police forces have a tolerance of 10% + 2mph so in a 30MPH limited the camera wouldn’t normally activate unless a driver was going at 35MPH or more and the threshold on a 70MPH stretch of motorway  would go up to 79MPH, but tase figures are by no means certain and it appears that here in Essex the standard threshold is not used so please be careful.

Now a former delivery driver, 63-year old Philip Dodd got a shock after it emerged that he had driven his van past a speed camera on the M62, which snapped him no less that 26 times over a 3-month period. It was only after he moved in with his partner and registered his vehicle at the new address that the DVLA caught up with him and sent him no less than 26 separate speeding tickets totalling £520 + £142 in costs.

He has also been banned from driving for 6-months.

The court heard how he had been flashed 4 times in just one week, twice on the same day! 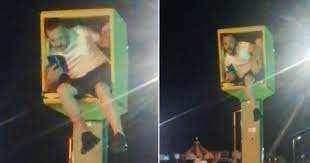 Meanwhile news has emerged of a holidaymaker from the Wirral who whilst waiting for his wife to return from buying a take-away pizza, climbed into the back of a speed camera in Towyn, North Wales and then used the torch in his mobile phone to flash passing vehicles.

He even flashed a man riding a mobility scooter.

Videos taken at the time show passing cars immediately slowing down after he flashed them.

Talking of naughty, this afternoon Margaret Mills turner her attention to focus on a notorious woman born in 1776.

The lady in question was MARY ANNE CLARKE, who at the age of 18 became an actress and later become the mistress of the GRAND OLD DUKE OF YORK, with whom she worked a profitable scam which encouraged potential recruits to the army to buy commissions.

Listen here to what Margaret revealed about this nefarious deed: –