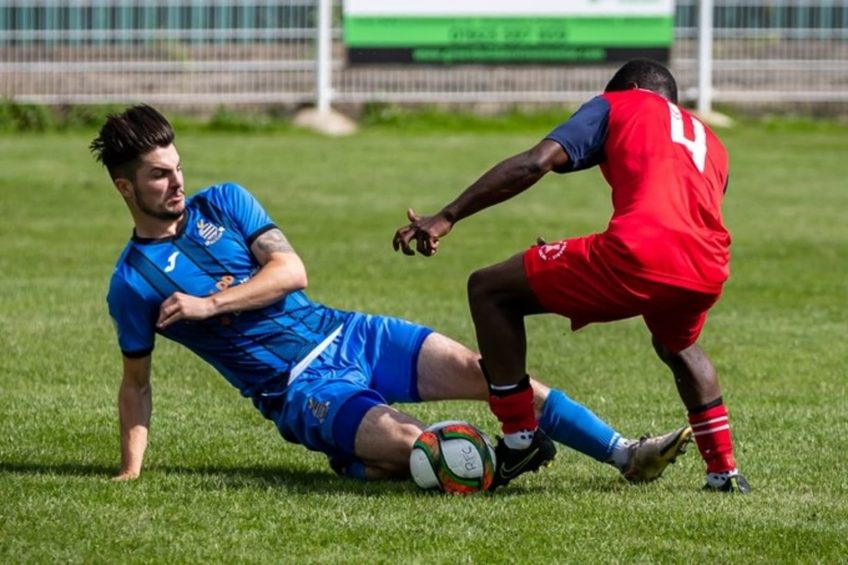 Walthamstow put in a dogged display at Oakside on Saturday that showcased their ability to dig in when required, while at the other end taking their chances in spectacular style as Jason Hallett and Adalberto Pinto each scored a superb goal to secure the win.

Redbridge saw Olamiji Ayoola unleash a 30 yard shot in the 6th minute that had plenty of power behind it, but was lacking in direction as it was aimed straight at the Stow keeper.

Harrison Carnesie crafted an opening for Stow in the 11th minute when he powered his way towards the Redbridge box before setting up Adalberto Pinto who could only skew his shot horribly wide. And Stow fluffed another chance soon afterwards when another fine forward move was wasted as Yemi Adelani flashed his shot across Redbridge’s goalmouth.

The hosts were able to halt Stow’s forward threat and then created two glorious chances themselves. Both came via corners, the first of which was headed narrowly over by Jake Brocklebank, then James Barlow attempted a volley which clipped the post before going wide.

Chances then dried up as both teams had well marshalled defences, however Stow did see a Carnegie effort cleared off the line.

Games as tight as this often revolve around pivotal moments and moments of individual brilliance. This was what happened in the 40th minute when a ball over the top came to Hallett who volleyed into the roof of the net to hand Walthamstow the lead.

Redbridge opened the second half with a couple of deep crosses that Amarildo Cekrezi claimed. On 55 minutes Stow launched a counter-attack that saw Hallett threading a defence-splitting pass to Adelani, however the offside flag went up to stop that move. It did show how dangerous Walthamstow can be as they had burst out their box with some fine one-touch passing football that had put the Redbridge defence all at sea.

Redbridge needed to get more men forward as on the hour mark the hosts were finding their frontline’s cutting edge seriously blunted and Stow’s keeper had little work to do beyond coming out for crosses. However on 65 minutes Harris had a shot from all of 35 yards that skimmed the top of the Stow crossbar.

But after that scare the hosts then found the Stow defence, marshalled by Tommy fletcher and Jason Beck, hard to penetrate as the visitors tackled, harassed and frustrated the Redbridge forwards; and even when balls did come into the danger zone they found Cekrezi to be a safe pair of hands and he claimed everything that came his way. A Redbridge free kick was headed away for a corner by Carvalho; and that piece of solid defending was replicated when Ayoola got on the end of the resulting corner only to see his shot blocked on the line by Osei.

Stow were able to put the game beyond reach in the 87th minute when Pinto let fly with a blistering shot that screamed past the Redbridge keeper before smashing into the top right hand corner of the net.

The visitors could have added to their tally a minute later, however Hallett placed his shot over the bar, and the same player then had another effort in stoppage time that rolled just wide.

The win shows just how well-organised Walthamstow are as this game was won by two outstanding goals, but it was the solid defence that played a major part. You keep a clean sheet and you are guaranteed a point, but if you can then score goals of the quality that Stow scored this afternoon then it will secure all three. Walthamstow will be a hard team to beat this season, and this win puts them 8th. Redbridge now sit 6th but certainly gave their visitors a tough game.