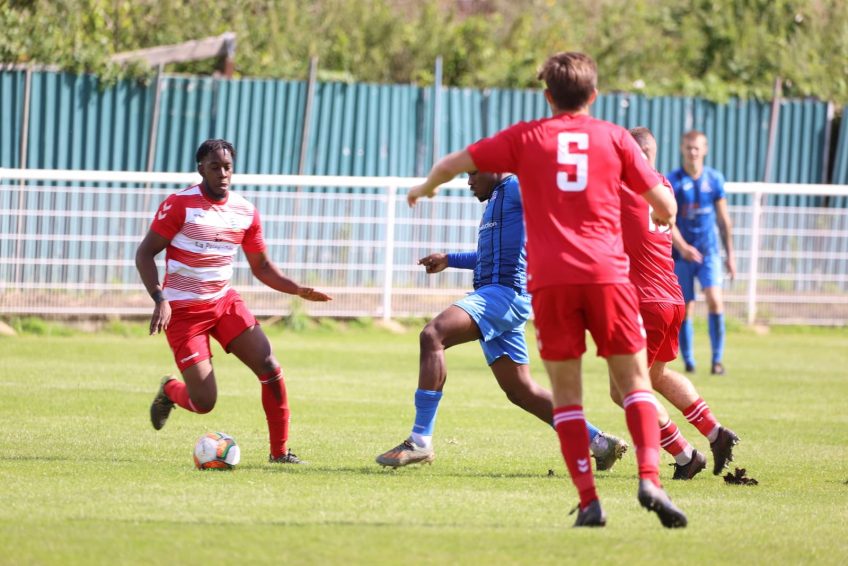 Ilford were able to beat local rivals Redbridge at Oakside, but had to come back from an early 1-0 deficit. However second half goals from Tigana Quebe and Lee Sharpe ensured it was Ilford who won this local derby Cup encounter.

The Motormen took the lead in only the 5th minute when a nice passing move ended up with a ball being fed to Rob Norris who poked home from close range.

But the hosts perhaps had a lucky escape when a loose ball was played across the middle of the park and was picked up by Quebe; the Ilford player then paced into the box before being tackled. Ilford made a claim for a penalty, that was turned down, and the whole scenario unfolded due to Redbridge being a bit careless in the first place.

Norris curled a free kick wide on 20 minutes, and two minutes later Ilford mustered their first real chance of the game when Reece Sayers saw his low shot tipped round the post by Connor Wheatley.

Being a local derby meant you expected both teams to dig in, and as a result there was little goalmouth action until the 42nd minute when Ibrahim Kehinde managed to find a way past the Ilford defence, before laying the ball off to Farah Abdishakur whose weak shot was then easily saved by Blackburn. Ilford then launched an immediate response which ended up with Collins Aribah having a shot tipped away by Wheatley. Redbridge then won a free kick in first half stoppage time which Norris directed into the Ilford box, but Blackburn punched the ball well clear of the danger zone.

It took only five second half minutes for Ilford to draw level. A ball was played towards Quebe on the edge of the Redbridge box. His first touch took him past his marker, his second touch a lovely little lob that left Wheatley standing and helpless as the ball made its way into the net.

Wheatley bravely punched clear the next Ilford ball that came his way, but he injured himself in the process and so had to be replaced by George Martin.

A Jake Brocklebank free kick was met by a powerful Abdishakur header, but Blackburn pulled off an amazing save to keep the ball out the Ilford net. Another Redbridge chance went begging on 64 minutes when Tim Ogunrinde delivered a cross that Abdishakur put over the bar from close range.

A pivotal point came three minutes later when Ogunrinde was brought down in the box and the referee awarded a penalty. Brocklebank took the penalty, but Blackburn was equal to it; then in the follow up Herman Mwanza went in a bit too overzealously, making contact with the Ilford keeper, which resulted in him being dismissed for his reckless challenge.

Ilford now had a numerical advantage and made it pay as they enjoyed most of the possession in the final twenty minutes. But they didn’t create much upfront until a corner was headed narrowly wide by Andre Embalo.

Ilford won another corner two minutes from time. The ball was delivered into the six-yard box where Leee Sharpe headed home from close range.

Blackburn however had to show some heroic goalkeeping to keep Redbridge out as he had to make a double save in stoppage time to deny Abdishakur, before then having to make another vital save to keep out Kehinde’s shot on the rebound.

Ilford’s win at Oakside now sets up an away tie with Barking in the Preliminary Round.

Saffron Walden Town breezed into the Preliminary Round after unloading a heavy barrage on Biggleswade United. Scott Piggott scored four of the goals, with Matt Hurley, Michael Toner and Gavin Cockman also getting on the score sheet. The Airportmen saw their FA Cup campaign grounded at the first attempt as Basildon United put four past Stansted without reply. A Suaibo Balde brace plus goals from Fahad Nyanja and Samuel Jeremiah did the damage. Josh Devlin fired Southend Manor into the next round at the expense of London Colney; Stanway Rovers edged past Leverstock Green by the same scoreline courtesy of a Blue Molloy strike; FC Clacton however were knocked out by Leighton Town with Danny Webb’s 63rd minute goal being enough to see the visitors make progress. Ware beat Takeley 2-1, the hosts opening the scoring on 15 minute via a Liam Hope goal. Dab Ryman then doubled the lead on the hour, with Coby Miles managing to reduce arrears with a goal a minute before full time. Woodford Town fell behind to a 17th minute Luke Ige goal, but Luke McElroy levelled up on 26 minutes and then the Woods were handed the lead by Richard Asamoah ten minutes into the second half. The hosts themselves then equalised with a Ben Search penalty in the 72nd minute before then going on to score again through Jack Nolde to run out 3-2 winners. Dwade James scored both of Enfield’s goals in a 2-1 win over Milton Keynes Irish, while a goal apiece from Greg Rodger and Danny Garard saw Little Oakley win their first ever FA Cup game against fellow ESL outfit, St Margaretsbury. The other all-ESL tie went the way of Cockfosters who travelled to Sawbridgeworth Town and came away with a 3-0 away win: George Beattie, Reece Masanya and Ryan Wade were the scorers in that one. Athletic Newham’s FA Cup baptism took place at Virginia Water, and they will have to go at it again on Wednesday after Saturday’s game ended in a 1-1 draw. Casey Bocarro scored for the hosts, with Tony Cookie bagging the Newham goal. A sudden downpour in East London put paid to Walthamstow’s tie against Crawley Green, while Sporting Bengal United v White Ensign was also rained off. The games have been re-arranged with Walthamstow playing on Tuesday evening, with the all-ESL clash between Sporting Bengal United and White Ensign being staged on Wednesday.