First off today we heard about a man who claims he always wins and will never accept otherwise. 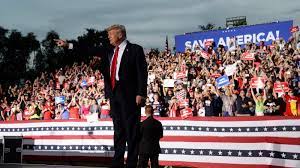 We are, of course talking about an individual justly renowned as being the paragon for truth and accuracy in all his pronouncements, DONALD TRUMP who has just addressed a crowd of diehard fans at Robarts Arena in Sarasota, Florida, for his second ‘Save America’ rally where he told them that there is no freedom of speech in America!

Arguing that he is not allowed to say that the 2020 US Election was rigged or that he technically won.

Trump went on, “We will…reject leftwing cancel culture. And we will restore the right to free speech in America again, which we don’t have.

“We can’t let them take away our free speech so we can’t talk about corrupt elections. Otherwise, you’ll have…that’s communism. That’s what they do in these communist countries, you have no voice. We have a truly sick election system, it’s got to be changed. Remember this, I am not the one trying to undermine American democracy. I am the one trying to save American democracy.”

Strangely the former President doesn’t see the irony in complaining about a lack of freedom of speech when he’s able to ask people to come together and listen to him speak about whatever he wants without any sort of punishment or retribution.

“If we lost the election…I wouldn’t have a crowd that goes beyond what the eye can see, that stays in a thunderstorm,” he said.

He went on, ”Democrats used Covid to cheat. They illegally changed the rules in key states. They stole the votes, abolished signature verification requirements, created a powerful system for media and the online censorship of their opponents, and did everything possible to facilitate fraud just like you would do in a third-world country. That’s what happened with this election.” 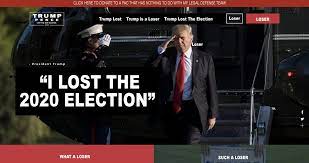 Meanwhile sticking to political correctness like glue, we asked if it worries you when playing cards, that the pack you’re using might be politically incorrect?

For example did you ever stop to consider why the male monarch trumps the queen, or that the picture cards all feature white images?

Well now a 23-year old forensic psychology student, named INDY MELLINK has created a genderless and race neutral pack of cards where the King, Queen and Jack have been replaced by images of gold bars, silver coins and a bronze shield. 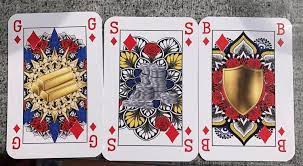 Says Indy, “If we have this hierarchy that the king is worth more than the queen then this subtle inequality influences people in their daily life because it’s just another way of saying ‘hey, you’re less important.”

No less than 1500 of the new packs have now been supplied to game shops in France, the USA, Belgium and Holland.

Wonder how the Joker is depicted.