Is this what you might call, “A BUM DEAL”? 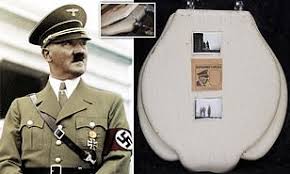 How much would you be willing to pay for Adolf Hitler’s toilet seat – always assuming you’d want it anyway?

Well if your heart’s set on it, its coming up for auction in New Jersey, any time soon, and is expected to fetch the equivalent of £15,000.

The item was apparently looted from the Fuhrer’s bathroom at the Berghof by a US soldier after he was told by superiors to “get what you want” from the heavily bombed retreat, during the last days of the war.

Bill Panagopulos of Alexander Auctions said it was ‘guaranteed to be one of the most eye-catching items one could ever add to a collection of World War Two relics’.

He added: ‘This was from Hitler’s personal bathroom, from as close to a “throne” as the dictator would ever get.”

‘One can scarcely imagine the plotting the tyrant undertook while contemplating the world from atop this perch.’

Still it makes you wonder why anyone would even consider parting with £15,000 for an old loo seat, whoever’s bottom used to adorn it – but what do I know!

Coming back to the real world, Margaret Mills joined me today and took us on a trip to the days when Witham, was THE place to be.

It seems that at one time the town was favoured by Flemish weavers as a base for the cloth industry, and a bit later the town was renowned for its health giving spa waters.

If you missed it, you can catch what Margaret had to say, you catch it all again here: –