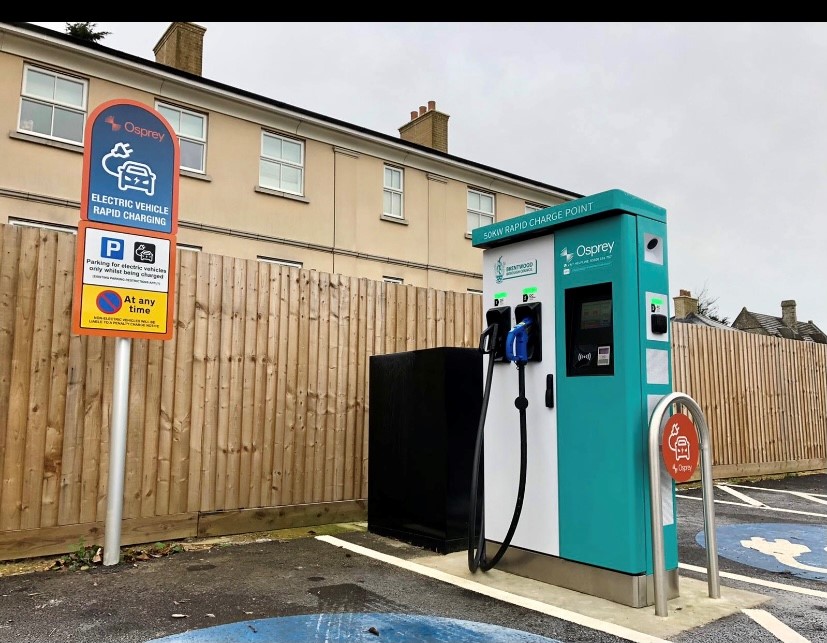 Brentwood Borough Council has joined forces with Osprey Charging Network to launch a series of Electric Vehicle chargers at the Town Hall in Ingrave Road.

The new 50kW rapid chargepoint is open to the public 24/7 every day of the year.

Separately three new overnight chargepoints have been installed at the South Car Park for the Council’s own electric vehicles. Further chargers will be rolled out over the year.

Brentwood Borough Council Leader, Cllr Chris Hossack said; “In 2020 the Government announced that the ban of the sale petrol and diesel vehicles would be brought forward to 2030, and as a result there will be thousands of EVs purchased every year. Whilst around 50% of drivers will be able to charge at home, those drivers in rented accommodation or flats and apartments will be seeking reliable and rapid public chargers to refuel their vehicles. In addition, as the many commercial fleets in the Brentwood area turn to electric, they too will be looking for stop-off charging points on their routes. So it is vital that Brentwood is ahead of the game in offering this facility to residents. Over its lifetime the single chargepoint alone will enable removal of over 1.75 tonnes of CO2 from entering the atmosphere that’s the equivalent to planting over 10,000 trees in the borough.”

Osprey Charging Network Chief Executive Officer, Ian Johnston said; “The rapid chargepoint is open to all EV drivers and can be accessed 24/7/365 with a simple tap of a contactless bank card – you don’t need an account or an app and there are no connection fees – it is simple pay-as-you-go. We are delighted Brentwood has joined Osprey’s nationwide network of over 200 rapid chargepoints, that can provide a charge to 80% in as little as 30 minutes whilst being only a five minute walk to the amenities of Brentwood High Street. Osprey also offer an app for those who need VAT receipts, and a subscription to help those who charge more than twice per month save money.”