Written by Paul Golder in In The Papers👁 240 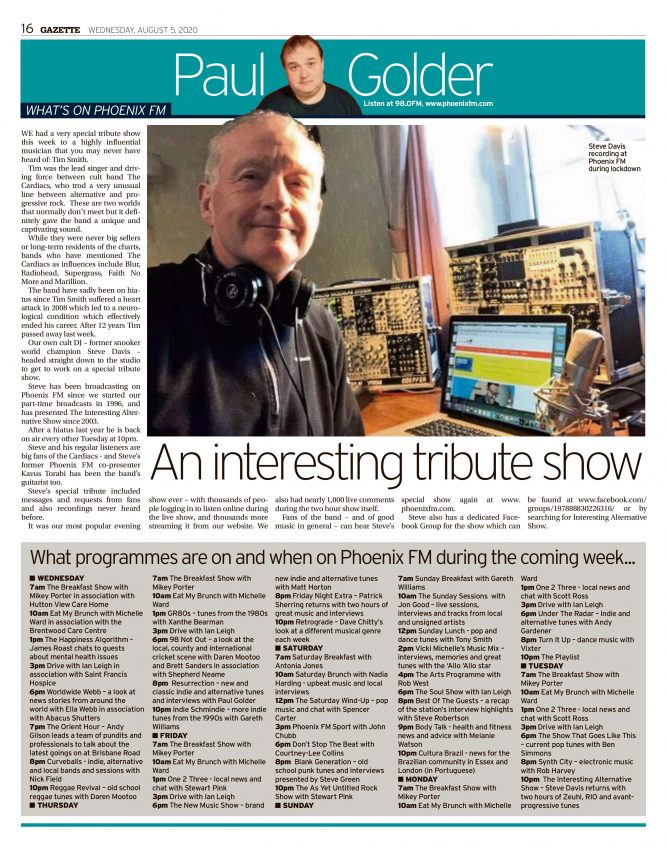 We had a very special tribute show this week to a highly influential musician that you may never have heard of – Tim Smith.

Tim was the lead singer and driving force between cult band The Cardiacs, who trod a very unusual line between alternative and progressive rock. These are two worlds that normally don’t meet but it definitely gave the band a unique and captivating sound.

While they were never big sellers or long-term residents of the charts, bands who have mentioned The Cardiacs as influences include Blur, Radiohead, Supergrass, Faith No More and Marillion.

The band have sadly been on hiarus since Tim Smith suffered a heart attack in 2008 which led to a neurological condition which effectively ended his career. After 12 years Tim passed away last week.

Our own cult DJ – former snooker world champion Steve Davis – headed straight down to the studio to get to work on a special tribute show.

Steve has been broadcasting on Phoenix FM since we started our part time broadcasts in 1996, and has presented The Interesting Alternative Show since 2003.

After a hiatus last year he is back on air every other Tuesday at 10pm.

Steve and his regular listeners are big fans of the Cardiacs – and Steve’s former Phoenix FM co-presenter Kavus Torabi has been the band’s guitarist too.

It was our most popular evening show ever – with thousands of people logging in to listen online during the live show, and thousands more streaming it from our website. We also had nearly 1,000 live comments during the two hour show itself.

Fans of the band – and of good music in general – can hear Steve’s special show again at phoenixfm.com.

Steve also has a dedicated Facebook Group for the show which can be found at https://www.facebook.com/groups/197888830226316/ or by searching for Interesting Alternative Show.