Billericay suffered another case of the Boxing Day Blues as they slumped to a 4-1 defeat at the hands of local rivals, Concord Rangers. Having hauled themselves level through Femi Akinwande, after an early own goal from Themis Kefalas, the Blues imploded during a catastrophic second half at the Aspect Arena.

Whilst not the meek Boxing Day surrender of last year at Chelmsford City, during the dying embers of Dean Brennan’s stint, this was the poorest display under Jamie O’Hara’s stewardship. Second half goals from Aron Pollock, James Blanchfield, and Joel Nouble sealed the win for the Beach Boys.

After an encouraging start, distinguished by some excellent Cup performances, Billericay’s form has tailed off badly of late. With one win in nine League games, and just six points harvested During that sequence, the club have slipped to 15th in the table. Leaking goals, unable to perform away from New Lodge, and selection hampered by injury, an answer needs to be found to the club’s mounting problems sooner rather than later.

Only four points clear of the drop zone, the Blues find themselves in urgent need of points to avoid a relegation battle. A playable surface at home would help with only two home League matches – both drawn – taking place under O’Hara’s watch. With (pitch permitting) local derbies over the Christmas period at home, against Chelmsford City and the return game with Concord, the team have an immediate chance to get the season back on track.

It will not get easier in January either as the current top three, Wealdstone, Havant & Waterlooville, and Slough Town are all due to visit. If that was not enough, trips to high-flying Bath City and Dorking Wanderers are also on the agenda that month. At the end of January, the home fixture with Tonbridge Angels is already looking like a “must win” fixture. Alarmist? Maybe so, but performances have to improve markedly from current levels.

The current Billericay injury situation does not help and stretched resources were very apparent in the team that took the field at Concord. Only three substitutes were named, including O’Hara. With Faysal Bettache and Jacob Cook both unfit for selection, in came midfielders, Jack Paxman and Acer Laurent, the latter no longer with the club but willing to answer a late Christmas call-up from O’Hara. Oran Jackson, having debuted in the Essex Senior Cup against Isthmian North side, Basildon, came into the defence for Ben Nunn.

Concord manager, Danny Scopes, made two changes to the side that came home with a narrow 1-0 win at Dartford in the week. In came ex-Billericay right-sided midfielder, Kresh Krasniqi, who departed New Lodge in April 2017 after making 52 appearances. He replaced Lamar Reynolds. In turn, James Blanchfield came in to play attacking midfield. Billy Roast shifted to centre-back from his holding role to cover for the injured Jack Cawley.

With a healthy travelling support willing the Blues on to a better performance in the teeming rain, hopes were quickly dashed by a quick-fire Concord opening goal. An early incursion on the right-hand side saw 18 years old, Huddersfield town loanee, Kit Elliott dispossess Paxman near the corner flag. Advancing into the penalty area, his firmly hit centre across the six-yard box struck the heel of visiting centre-back, Kefalas, and flew straight into the net on two minutes to hand the initiative to the Beach Boys.

With momentum coursing through the team, Concord continued to apply pressure with the match unfolding largely in the Billericay half of the field for the first twenty minutes. With the visitors bemoaning their selection issues, it should be recognised that the Canvey side fielded a central midfield of Ben Wells and Henry Woods, aged 19 and 20 years. Both U-23’s from Gillingham and QPR respectively, joint National South experience amounted to a handful of starts. Both acquitted themselves well and never looked out of place.

In an exchange of hostilities, both sides fired shots off target created by their respective main attacking threats. Firstly, the impressive Nouble worked an opportunity for Krasniqi with a muscular run down the left. With the ball squared to him in a central position, a powerful, low effort flashed inches wide. In response, Billericay’s Akinwande out-muscled full-back David Olufemi to create a shooting chance for Ody Alfa. The winger’s effort went wide of the post. 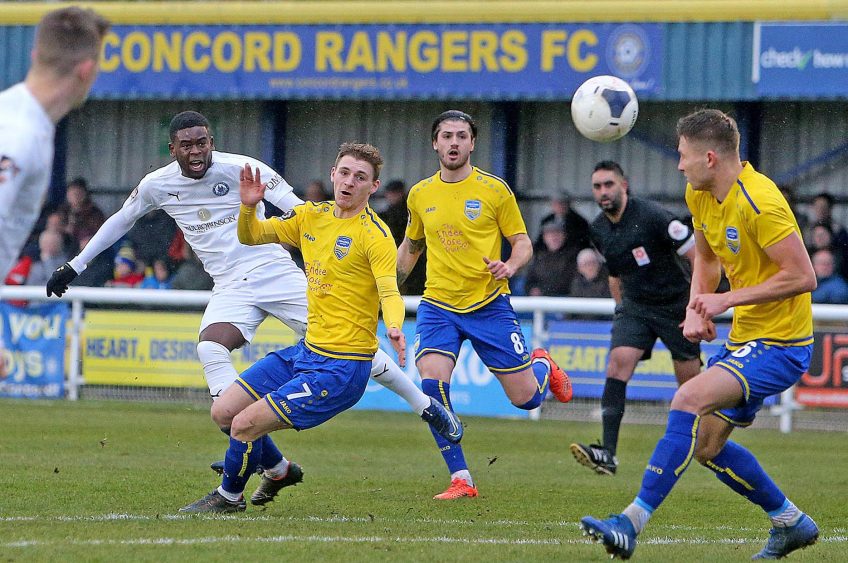 As Billericay started to work their way into the match, a 20th minute set piece saw a golden chance go begging. Josh Urquhart’s whipped delivery deserved a better finish as an initial header diverted to Kefalas just 10 yards from goal. The centre-back’s finish saw the ball cannon harmlessly off his boot and well wide of the Concord net. Moments later, Akinwande went close after evading Wells to strike a 30-yard drive just wide.

If, on recent evidence, there are individuals in the Billericay team that may not be up to the demands of football in the National South, Akinwande is certainly not one of them. One of the few in White that turned up to the match in a mood to battle and show his quality, he has been a revelation since he arrived at the club. One had the impression that if the visitors were to claw their way back into the game, it would be the big striker that brought it about.

No adaption periods required for him, he has clearly hit the ground running, taking on responsibility, and lifting some of the goal-scoring pressure from Jake Robinson’s shoulders. On 35 minutes, Akinwande registered his third goal in three outings with the equaliser from a free-kick. Well placed around the wall, his low strike brushed Blanchfield on the way to its target in the corner but was unquestionably the work of the ex-Braintree striker. 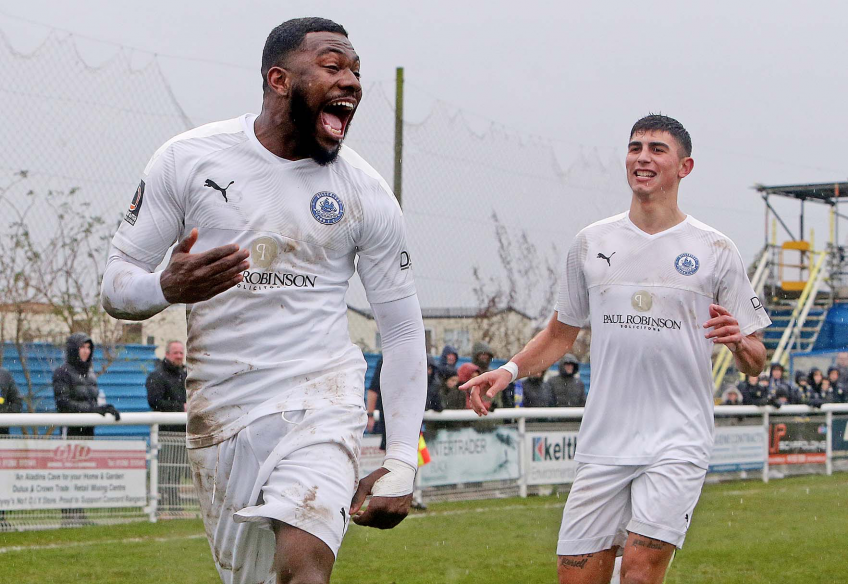 Once more, Akinwande would cause consternation in what had been a composed Concord back-line. With a malfunctioning Blues midfield, seemingly unable to move the ball quick enough or orchestrate much in the way of passing combinations once crossing the half-way line, it took a foray forward from Urquhart and cross into the box to raise the excitement levels.

Picking up the ball in the Concord penalty area, Akinwande rifled a shot on goal that was blocked by home goalkeeper, Chris Haigh. Latching onto the rebound, a further strike had to be hacked off the line by loanee Southend United left-back, Tom Clifford. With full-back’s at the League club disappearing fast, a good set of performances for Concord could see the youngster given his chance by manager, Sol Campbell, at some stage in the future.

With the teams’ level at half-time, Billericay could reflect on a satisfactory ending to the first period. Having played poorly, being dominated in the early stages of the match, a set piece and the individual brilliance of Akinwande had seen them regain parity. Although Concord had shown good movement, especially through the bustling Nouble and striker Kit Elliott, who worked the line well, the Beach Boys had few direct attempts on goal to trouble Alan Julian. What followed was not anticipated as Billericay seemed to self-destruct from the off.

No doubt with the words of the manager to keep it tight and stop the crosses ringing in their ears, the Billericay defence duly failed to halt the first centre into the penalty area. The threatening Nouble picked up the ball and fired a fierce shot that was diverted across the six-yard box. Centre-back Aron Pollock has four League goals already for the season. He will not get an easier one than his fifth. All alone, he had ample time to thump the ball over the line to give the home side yet another early advantage.

Some had questioned Concord’s recruitment at the start of the season as they sought to re-organise after the end of the Sammy Moore era. With an experienced manager in Scopes, steeped in the traditions of Concord, appointed and backed up by a knowledgeable player recruiter in Adam Drew, Concord have flourished. Sensible stewardship under a Chairman with a deployable, and fully funded strategy, has also played its own vital part.

Operating to a restrained, yet adequate, budget, the pursuit of players from either local clubs’ in lower leagues, discarded youngsters not making it in the National league, topped with a sprinkling of promising League club U-23’s has worked well. There have been hits and misses of course but enough of the former to work. Sitting in the top ten of the League, the Canvey club have a successful and, dare it be said, enviable, business model.

That the scorers of the third and fourth goals, Blanchfield and Nouble, should be prime examples of the Concord strategy merely reinforces a salient point. Blanchfield, who struck in the 63rd minute with a left foot, angled drive into the net after a flick-on by Elliott, joined last May from Dagenham and Redbridge. An Ipswich Town U-23 player, he signed for the Daggers in summer 2018 but did not feature in Peter Taylor’s plans. Recognised as a skilful, creative player, a regular run of games at the Beach Boys has been of mutual benefit. 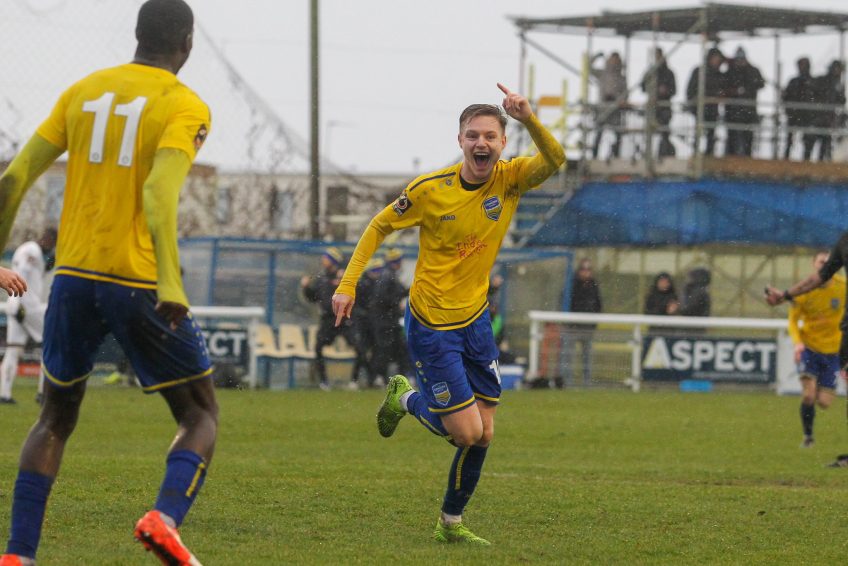 Perhaps the biggest success story is the example of the lower league player given his chance. While Haringey Borough’s side that gained promotion to the Isthmian Premier has provided fertile recruitment ground in terms of full-back’s David Olufemi and, currently injured, Michael O’Donoghue, the best find must be Nouble who was a constant menace to the Billericay back-line. With his 73rd minute strike creeping in at the far post, Nouble capped a fine performance with a goal taking his League tally to eight for the season. 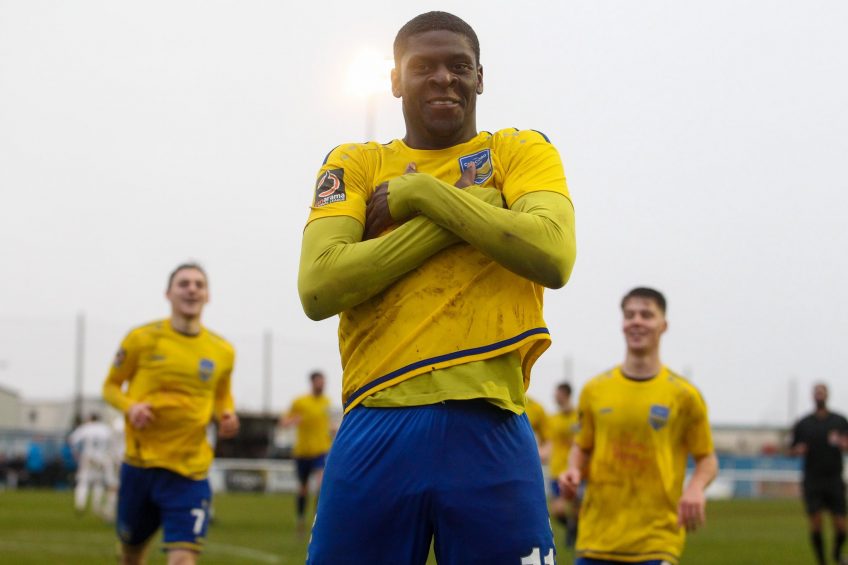 Joel Nouble of Concord celebrates his goal to make it 4-1. Photo Courtesy: @paulraff123

Billericay’s second half was one to forget in what turned out to be a chaotic, shapeless performance, in contrast to the well-drilled Concord side. With O’Hara’s substitutions only preceding further Concord goals, everything that could go wrong went awry. Noting that late changes disrupted the best laid of plans, it was still painful for fans to watch what was a poorly organised, lifeless display against local rivals. Reminiscent of the darkest days last Christmas under Brennan, performances like this have consequences if repeated too often. 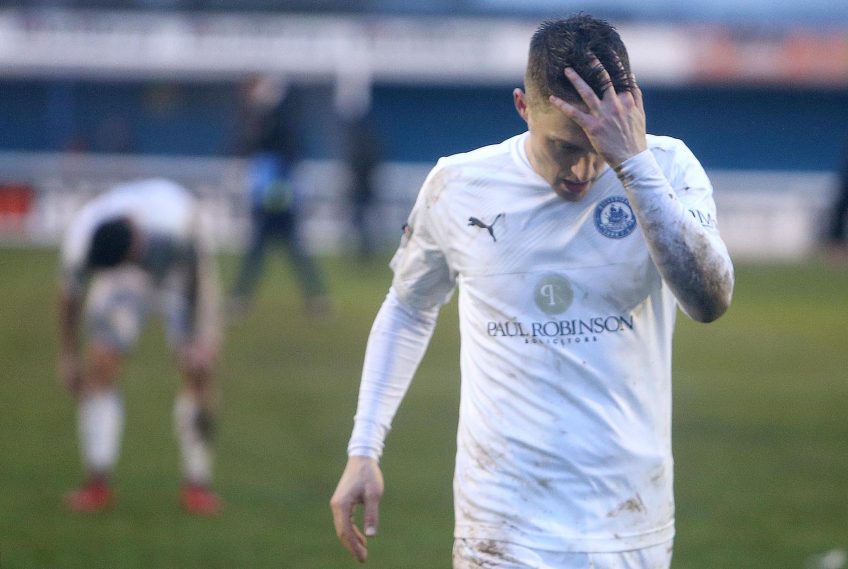 A dejected Jake Robinson leaves the field after another defeat on the road. Photo Courtesy: @nickyhayesphoto

The Christmas fixtures provides players and management with the chance to rapidly make amends and show the supporters that lessons have been learned. A couple of good performances and a win or two to drive the Blues a bit further up the table will make a huge difference. It all starts with Chelmsford City then and who better against than our fiercest rivals to go on a run of form?