This is what they call art! 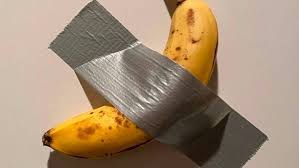 When there are so many deserving causes around, I have to say I find it not just bizarre but somewhat obscene that anyone would be willing to shell out £91k for a banana duct taped to a wall – but amazingly that’s what’s just occurred at the ART BASEL MIAMI BEACH exhibition in Miami this week – and not just once either.

Organisers say that 2 editions of the work, called COMEDIAN  by Italian artist, Maurizio Cattelan sold for £91k apiece whilst, presumably due to demand, the price of a third has been increased to £114k.

A spokeswoman for the exhibition, said that after a 15 year break Maurizio has returned to the international art fair, and we are so fortunate to collaborate with him.

“The banana is many things – a symbol of global trade, a witty double entendre, and a classic device for humour.

“Maurizio takes mundane objects and transforms them into vehicles of both delight and critique.”

Art journalist Sarah Cascone said the artwork was the “talk of the town in Miami right now”.

Cattelan – who picked the banana for his artwork from a Miami supermarket – has reportedly decided to sell the third edition to a museum, with two institutions already having expressed interest.

He told Artnet he had been working on the idea for about a year and first created versions in bronze and resin.

He said: “Wherever I was travelling I had this banana on the wall. I couldn’t figure out how to finish it.

“In the end, one day I woke up and I said ‘the banana is supposed to be a banana’.”

Gallery owner Emmanuel Perrotin, who has worked with Cattelan for more than 25 years, dismissed the idea that the artwork is a joke, telling Artnet that every aspect of the work was carefully considered, from the shape of the fruit, to the angle it has been fixed with duct tape to the wall, to its placement.

Comedian is sold with a certificate of authenticity and owners can replace the banana as needed, the Miami Herald reported.

Meanwhile performance artist, David Datuna posted videos online showing himself peeling the fruit from the wall and consuming it in front of scores of onlookers at the Art Basel Miami Beach exhibition on Saturday.

Entitled Hungry Artist, he described eating the banana as an “art performance” and said the  Comedian installation, by Italian artist Maurizio Cattelan, was “very delicious”.

“I love Maurizio Cattelan artwork and I really love this installation. It’s very delicious ?,” he wrote on Instagram alongside three videos of his “performance”.

Already fairly ripe when it went up for sale, the original banana was never going to last long.

And the original banana being eaten in no way diminishes the integrity, the Miami Herald quotes Lucien Terras, director of museum relations for Galerie Perrotin, as saying.

“He did not destroy the art work. The banana is the idea,” Terras said.

And who knows? Now the art has become performance art, it could be worth even more. 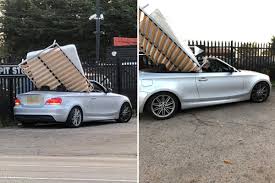 In the second hour of today’s show we reported on the woman who was caught driving a BMW convertible with a bed base and mattress sticking out of the top of her car and was pulled over by Essex Police officers as she made her way between Basildon and Colchester.

When approached by officers of the law, she told them ‘it’s wedged in the seat, so it’s okay’..

Officers said: ‘Proactive work in Basildon and Clacton today. ‘Some of the work based on traffic stops included positive stop and search for drugs, two drug drivers, seized for no insurance and an insecure load….she said: ‘It’s wedged in the seat so it’s okay!”

What action was taken against the driver has not been revealed, but causing a danger from distribution of load in a car can attract a fine of £100.