A demonstration to die for!


If you’ve ever been called upon to handle a high powered demonstration for a load of important people, it’s hard not feel sympathy for TESLA boss Elon Musk when the demonstration of his latest electric vehicle descended into farce. 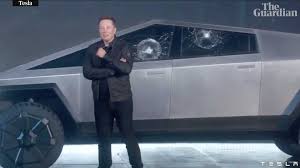 The futuristically designed stainless steel-skinned Cybertruck had been brought out onto the stage amid lasers and flames, when Mr Musk bragged to the assembled press core and potential buyers, that even sledgehammers couldn’t dent or scratch it.

To prove his point, he then asked a Tesla designer to strike the door with a sledgehammer, which just bounced off leaving no discernible mark.

Unfortunately when he turned his attention to the armoured plated glass by getting an employee to chuck a ball bearing at it, it promptly splintered.

Undeterred by this catastrophe, Mr Musk got the employee to repeat the exercise but on a rear window this time.

Unfortunately with the same result leaving the obviously damaged vehicle in full view for the rest of the presentation.

It has been suggested that the glass might have been weakened either by the use of the sledgehammer first, or by having carried out the same test earlier on the same vehicle, without any problems being encountered.

Either way, it seems that punters are confident that by the time the vehicle goes on sale in 2021, Tesla will have made some tweaks to resolve the issue, as following, and in spite of the demonstration, orders were placed for 200,000 units which with a refundable $100 deposit, amounted to $20m, even if Mr Musk himself saw his personal wealth collapse by $768m in a single day.

As the glass in question is of the same kind planned for their SPACE X Starship, personally I’d be more concerned if I was booked to go on that! 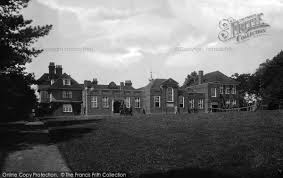 Being a Tuesday, Margaret Mills was back with to look at the beginnings of NEWPORT SCHOOL which was established back in 1588 by Dame Joyce Frankland.

Listen again here to what Margaret told me today about this remarkable woman:-